Mary Poppins Returns was the one movie in all of 2018 I was terrified to see. My affinity for 1964’s Mary Poppins is off the charts. Julie Andrews is so beguiling in the title role she justifiably won an Academy Award for her performance. But the movie is so much more than her and Dick Van Dyke singing and dancing through animated landscapes, having tea parties on the ceiling or stepping in time with a joyful band of energetic chimney sweeps on the rooftops of London. It’s also a beautifully plotted character study filled with delicious supporting performances from the likes of David Tomlinson and Glynis Johns that also just happens to be overflowing with a soundtrack featuring some of the best songs Oscar-winning brothers Richard M. Sherman and Robert B. Sherman ever wrote. It’s one of my favorite films and I’ve probably seen it 30 times, and it’s one of the few motion pictures where I’m all but certain I could recite every line of dialogue and sing along with every song with no problem whatsoever. 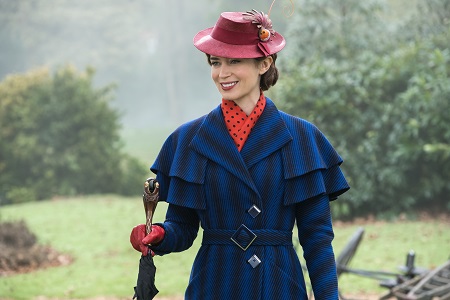 It’s likely not much of a surprise that I was on pins and needles sitting in the theatre waiting for this movie to begin. Thankfully director Rob Marshall, screenwriter David Magee (working from a story he conceived alongside Marshall and fellow writer John DeLuca), composer Marc Shaiman, lyricist Scott Wittman and the film’s all-star cast headlined by Emily Blunt triumphantly stepping into Andrews’ iconic shoes proves to be up to the challenge. While their new film is unlikely to be the same sort of revered classic its predecessor has become over the past five-plus decades that does not make Mary Poppins Returns a misfire. This is a glorious musical-fantasy overflowing in heart, genuine human emotion and eye-popping spectacle. It is a feast for the senses that put a song in my heart and a smile on my face for the duration of its crisply paced 130-minute running time. In short, it’s supercalifragilisticexpialidocious, and that’s the biggest word I’ve ever heard that also precisely fits what I thought about this sequel. It’s practically perfect in every way.

It’s been 25-years since nanny Mary Poppins (Blunt) last stepped foot in the house at 17 Cherry Tree Lane. Michael Banks (Ben Whishaw) still lives there along with his three children Anabel (Pixie Davies), John (Nathanael Saleh) and Georgie (Joel Dawson) and now works as a clerk at the same bank his late father helped run not so long ago. Even with his sister Jane (Emily Mortimer) frequently popping in to help it’s been a struggle for Michael ever since his wife died, and in his grief he’s inadvertently forgotten to pay the mortgage on the house for the past three months. As London is in the middle of a massive depression known colloquially as “The Great Slump” money is understandably tight, and if the two siblings can’t figure out what to do it’s likely they’ll lose their childhood home.

This is why Poppins has returned. Once more she needs to look after the Banks children, and that includes Anabel, John and Georgie as well. She’ll stick around until the door opens, but until then she will use her own brand of imagination, magic and smarts to teach a few lessons the two elder Banks appear to have forgotten and the three younger ones could use to learn. With the assistance of lamplighter Jack (Lin-Manuel Miranda), Poppins will do whatever she can to help Jane and Michael discover the right course of action while at the same time showing the children a world of possibility they never knew existed. They’ll all be tripping the light fantastic before you can say, “Bob’s your uncle,” and whether they have to go topsy-turvy in an upside-down workshop or go to the musical theatre while wandering around the edges of a cracked ceramic pot there’s no denying this is one adventure none of the Banks are soon to forget.

One of the best things about Mary Poppins Returns is that Shaiman and Wittman are smart enough to not blatantly repeat or recall any of the Sherman brothers’ signature tunes from the original. While there is an instrumental callback every once and a while, the new songs are their own individual thing, and while none of them are as immediately catchy as “Let’s Go Fly a Kite, “Jolly Holiday,” “A Spoon Full of Sugar” or the Oscar-winning “Chim-Chim-Cheree” that does not mean they’re still not terrific. Blunt’s first tune “Can You Imagine That” is a joyful show-stopper, Poppins taking the children on an undersea bubble bath tour that also works as a nifty prologue to all that will happen to them, their father and their aunt as the remainder of the story progresses towards conclusion. There’s also the delightful “A Cover Is Not The Book” featuring the return of those goofily polite animated penguins, while the agreeably ridiculous “Turning Turtle” sung by an almost unrecognizable Meryl Streep is infectiously obnoxious in all the right ways.

Then there is Emily Blunt. While no actress could likely equal the genius that was Julie Andrews in the original, make no mistake Blunt comes pretty darn close to pulling off just that sort of miracle. She’s divine, hitting all the right notes (and not just the musical ones) with such pinpoint precision watching her bring this character back to life after a 54-year hiatus is nothing short of miraculous. Her magnetism is never in doubt, Blunt tackling the role with such poised enthusiasm her multifaceted, emotion-rich performance cannot help but be infectious.

Whishaw is also excellent, delivering a far more nuanced and powerfully honest turn as Michael than I admit I was anticipating. In many ways he ends up being the heart and soul of the movie, his realizations as things pertain to his life, career and family richly profound. Mortimer is nearly as lovely in her own right and if anything the movie could have used more of her, while Colin Firth appears to be having a grand time playing the type of old school Disney villain the likes of Keenan Wynn (The Absent-Minded Professor), Ray Milland (Escape from Witch Mountain) and so many others used make an entire second career out of portraying once upon a time. As for Dick Van Dyke, I don’t want to say too much. While the reason for his reappearance is never a question mark, that does not mean seeing him back on the screen in all his amiable, scene-stealing glory is any less wondrous, and I want audiences to enjoy this return hopefully  as much as I did and free of any additional spoilers from me. 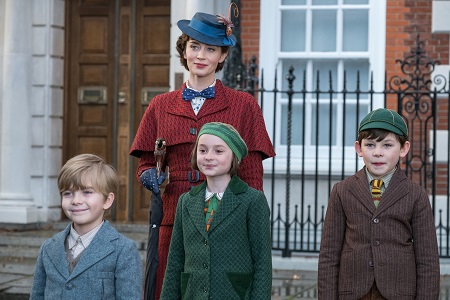 If I’m being honest I could have done with a bit less of Miranda. He’s just fine as Jack, and much like Van Dyke’s Bert in the first film his character’s job is to work something like a cross between a Greek Chorus and a narrator as he helps explain what is going on. But it often feels like Miranda is pushing everyone else off the screen, including Blunt, the lamplighter randomly intruding into scenes I would rather have viewed without him being there. Still, the man is a crack song and dance impresario who knows how to put on a show, his spoken-word solo during “A Cover Is Not The Book” a delicious, subtlety winning homage to what Van Dyke also did during his portion of the “Supercalifragilisticexpialidocious” number back in the original.

It’s probably best to just leave things there. I wasn’t sure what I was going to get with Mary Poppins Returns, and as hard as I try to leave all preconceptions at the door before I enter the theatre, the terror I was feeling as I sat down for this screening was unlike anything I’ve experienced in quite some time. But at the same time the passionate enthusiasm that was also coursing through my veins, my anticipation and excitement to discover what Marshall and his collection of storytellers, artists, actors and animators had in store for me to watch was simply sky high. The sequel lived up to and exceeded just about all of my wildest hopes and fantasies for what it could turn out to be, this nanny’s magical spell far too powerful to resist.