Thomas (Dylan O’Brien), Teresa (Kaya Scodelario), Minho (Ki Hong Lee), Newt (Thomas Brodie-Sangster), Frypan (Dexter Darden) and the rest of the Gladers have survived The Maze, leaving their captors at WCKD in a state of bullet-riddled disrepair. The chief architect behind their successful escape is Janson (Aidan Gillen), the leader of a group of soldiers and scientists claiming to want nothing more than to see these kids free to live their lives and hopefully save the remainder of civilization from the diabolical plague that’s devastated the planet. 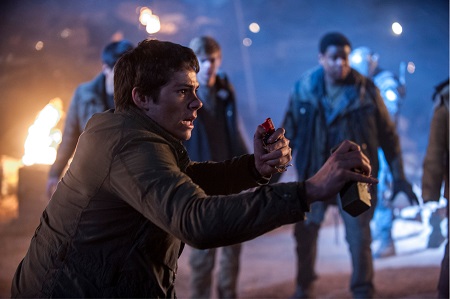 All is not as it appears. Thanks to new friend Aris Jones (Jacob Lofland), Thomas learns the awful truth. The Gladers have not escaped WCKD. Ava Paige (Patricia Clarkson) is not dead. All of them are still in danger. Making a daring escape from the facility, the group is on the run once more, their only hope to make the long trek into the mountains and hope the rebel forces residing their exist and are not the myth survivors eking out the most basic of existences in the ruined remnants of civilization believe them to be.

Thus begins Maze Runner: The Scorch Trials,the second chapter in author James Dashner’s obscenely popular young adult trilogy. Much like Mad Max: Fury Road, this is a story told almost entirely in motion, the whole thing nothing more than a two-hour chase punctuated with moments of expository rest allowing both the Gladers as well as the audience opportunities to catch their collective breath. Returning director Wes Ball again showcases an astonishing ability to stage action sequences as well as a distinct visual style that’s different from most other dystopian teen-oriented cinema, keeping things acceptably well-paced even if the movie is admittedly a little long. It’s entertaining and, unlike its predecessor, even though it’s the middle chapter in an ongoing saga it’s satisfying in and of itself, concluding in a manner that wraps up this particular tale even if there are numerous tangents and threads still dangling when the end credits begin their crawl.

It isn’t as interesting as the first film, there is no denying that, and I cannot say T.S. Nowlin’s script does a lot to conceal this. It’s predictably straightforward, rarely coming up with a twist or a turn that isn’t expected. Even when a famous face pops up in a key supporting role (Giancarlo Esposito, Lili Taylor, Alan Tudyk and Barry Pepper the primary quartet on that front) they don’t do anything out of the ordinary, playing pretty much exactly to type, moving the action forward in ways that are never surprising. Additionally, when characters do stop running they tend to spout unnecessary explanations of what’s been going on and why that grows increasingly tiresome, making me wish on more than one occasion that they’d all just shut up and get on with trying to survive.

But it looks terrific, and when the Gladers are in motion the film can’t help but become a kinetic wonder filled with energy and excitement. While Ball might be pulling from the likes of 28 Days Later, Dawn of the Dead, The Road Warrior and Star Wars a little too obviously, that doesn’t mean he still doesn’t find a way to make the on-screen action his own. More than that, though, he manages to connect all of the razzle-dazzle to the characters themselves, making Thomas’ story mean something as it is propelled forward by forces beyond his control.

Look, not a lot actually happens in The Scorch Trials. This is the bridge story that only exists to get things over the hump and set the narrative on a path towards revolution and, one would hope, eventual victory on the part of the Gladers and those they inevitably lead into battle. But as a movie, as a centralized story where characters grow, evolve and learn things about themselves they potentially did not know, Ball’s second descent into author Dashner’s ravaged world is a good one, and considering my ambivalent reticence to the first The Maze Runner that isn’t a statement I make at all lightly.