After being betrayed by Teresa (Kaya Scodelario), the surviving Gladers Thomas (Dylan O’Brien), Newt (Thomas Brodie-Sangster) and Frypan (Dexter Darden) make the decision to do whatever they have to in order to free Minho (Ki Hong Lee) from the clutches of WCKD and the scientist behind everything they’ve endured, the mysterious Ava Paige (Patricia Clarkson). Setting out for the last surviving city to save their friend, the trio are joined by rebels Brenda (Rosa Salazar) and her devoted adopted father figure Jorge (Giancarlo Esposito), the former strangely showing no signs of infection from the Flare virus after being bitten by an infected mutant six months prior. 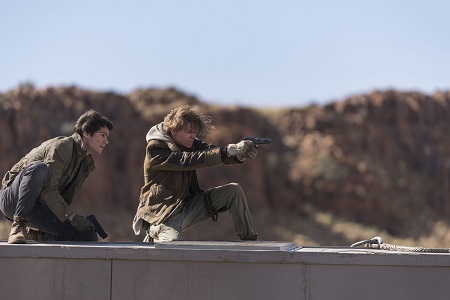 Chief of WCKD security Janson (Aidan Gillen) anticipates Thomas and his friends will be coming to rescue Minho, and so when cameras pick him up outside the city walls he’s hardly surprised. Yet Teresa wants her former friend captured alive, especially after she makes a startling discovery that could potentially lead to a cure for the Flare virus, and with Paige’s backing the orders to bring him into custody unharmed are summarily given. But Janson has a score to settle with Thomas, and he’s not so certain these women have humanity and WCKD’s best interests in mind, and as such he’s determined to do whatever it takes to make this former Glader and his friends suffer for every indignity and setback he believes they’ve violently sent his way.

Picking up relatively soon after the events of 2015’s Maze Runner: The Scorch Trials, the final chapter in author James Dashner’s best-selling series finally hits screens after something of an unexpected delay. While shooting Maze Runner: The Death Cure star O’Brien significantly injured himself filming a key stunt sequence. As such, series director Wes Ball and studio 20th Century Fox were forced to put the sequel on hold, having to wait almost an entire year before he was healthy enough to finish shooting and to bring core cast members back to the production after they finished other contractual obligations.

I can’t say the delay hurt the film in any noticeable way, as this series, for all its visual flourish and visceral action theatrics has always tilted more in the director of Divergent and its ilk than it does The Hunger Games. Even so, the fact Ball and the studio insisted on ending things with one final story and refused to split Dashner’s book into two pieces works decidedly in the movie’s favor. This is easily the most self-contained and streamlined story of the series, and while having watched either The Maze Runner or its sequel would be beneficial, newcomers shouldn’t find themselves all that lost by anything that transpires.

None of which means that returning screenwriter T.S. Nowlin’s scenario isn’t needlessly convoluted and obnoxiously overwrought in a number of fundamental ways. There are odd subplots that tend to go nowhere, the chief one involving an infected messiah who knows how to get into WCKD’s heavily protected city, played with theatrical exuberance by the always watchable Walton Goggins. There is also the resurrection of a key, assumed dead character from the first film, a surprise revelation that is a bit more goofily laughable than the filmmakers arguably intended. Additionally, the relationship between Thomas and Teresa, the core element that helped drive events in the previous films, is frustratingly distant this time around, and I can’t say I was drawn into their emotional melodrama as fully as I found myself wanting to be.

Yet, even at an epic 142 minutes, gosh darn it all if I didn’t still get a kick out of watching The Death Cure. Ball continues to impress, and this time around his handling of the film’s massive action sequences, pyrotechnics and obvious practical effects is extraordinary. If anything, I’m slightly surprised more people weren’t injured making this trilogy capper, and I hope the stunt people working on this were paid overtime for their accomplishments. There’s one shot of an exploding car tumbling down the street like a bowling ball that literally had me jumping out of my seat, while a climactic siege on WCKD’s headquarters is as heart-stopping as it is exciting. 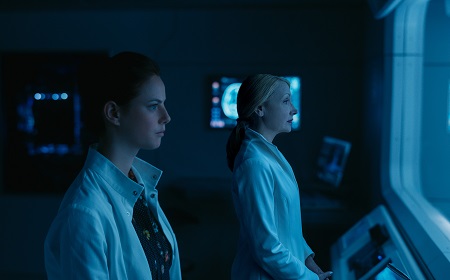 I’m not sure if O’Brien is ever going to make the jump to international superstardom but he is certainly a more effective a presence in this series than he was in last year’s espionage terrorism thriller American Assassin. Even with the delay to recover from his injuries he still manages to deliver a full-throated performance, watching Thomas finally come into his own as a leader suitably satisfying. Gillen also continues to be a fine foil, the “Game of Thrones” actor having a noticeably giddy time bearing Janson’s teeth as he attempts to pummel his nemesis into the dirt as if he were gleefully stomping up and down upon a helpless ant colony.

I have no idea what fans of the series or rabid readers of Dashner’s novels will think of this installment, and considering how many tangents it flies off in and how many loose ends it needs to tie up, staying interested for every second is a bit more difficult than I initially assumed it would be. But overall I was fine with how Ball and his team wrapped things up, and while Maze Runner: The Death Cure doesn’t completely satisfy, it does so just enough to make me think heading out to a matinee screening to give it a look would be worth the effort it takes to do so.