Claire Breton (Catherine Frot) is a trusted midwife working for a small Paris clinic that is being shut down by the hospital that runs it in order to move staff to a larger, more technologically advanced facility with an emphasis on pushing patients in and out quickly more than it is in treating them as individuals. While administrators and coworkers desperately want her to stay on, she’s not so sure, and after three decades in the profession where she puts the pregnant mother first changing that now isn’t something she wants to do. 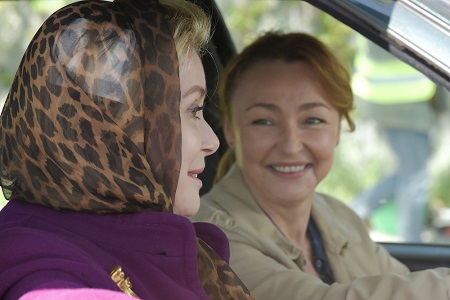 While navigating through the few final weeks of the clinic’s existence, Claire spends her free time tending her garden plot, trying to help her medical student son Simon (Quentin Dolmaire) figure out his future and enter into a blossoming romantic friendship with gregarious international truck driver Paul Baron (Olivier Gourmet). She also finds herself face-to-face with her late father’s beloved mistress Béatrice Sobolevski (Catherine Deneuve), the woman more of a compatriot and parent to her than her birth mother ever was. But Claire hasn’t seen Béatrice in years, not since her sudden departure helped fuel an unspeakable family tragedy, and after all these decades of silence she’s not certain their reunion deserves to be a pleasant one.

The Midwife might be a quiet, straightforward movie, but that does not mean there still isn’t a lot going on inside writer/director Martin Provost’s (Séraphine) latest, exquisitely acted melodrama. Deeply emotional, filled with little moments that brought hushed tears to my eyes, this story of a middle-aged woman at personal, familial and professional crossroads is continually enthralling, and even when cancer scares and unintended pregnancies get thrown into the mix there is an aura of captivating authenticity that permeates things start to finish. It’s an acutely self-aware motion picture that never overplays its dramatic hand, and as such become for more affecting as it builds to its gentle, reflectively contemplative climax.

This is a measured story, and Provost doesn’t appear to care that things proceed at their own leisurely pace. He is intent on making sure each step in Claire’s journey happens at its own naturalistic fashion, the filmmaker transitioning between scenes of her conversing with Béatrice, dealing with Paul’s advances with secretively bemused enjoyment and assisting her son with his medical school anxieties. All of these incidents come to pass only when necessary, the director never tossing in subplots or side developments just for the sake of doing so. Provost treats every happening, even Béatrice’s gambling addiction and inability to let go of her more insalubrious indulgences (red meat, smoking, whiskey, etc.), with respectful restraint, finding the inherent humor in tragedy and the requisite heartbreak that can often accompany one’s greatest moments of happiness.

Deneuve, a cinematic legend and one of the world’s greatest living actresses, plays a character not that far removed from some of her more iconic roles. Béatrice is Séverine from Belle de Jour, Geneviève from The Umbrellas of Cherbourg and Marion from The Last Metro all rolled into an older, if not altogether wiser, package. She is a woman who has lived life to its fullest, doing so with a wide-eyed joie de vivre that’s both desirable and regrettable. Deneuve portrays this woman with a winsome gracefulness that hints at the regret she goes out of her way to conceal, and while Béatrice doesn’t spend a lot of time ruminating on the missteps and mistakes of her life, it is the ones that involve Claire that haunt her, even if she goes out of her way not to show it. 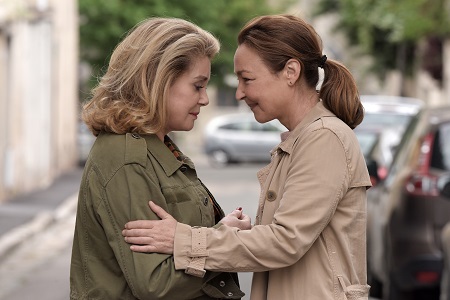 Frot, another French superstar who has been nominated for her country’s César Award (France’s answer to the Oscar) ten times, winning twice for her performances in 2015’s Marguerite and 1996’s Family Resemblances, is equally outstanding, bringing Claire to life with vividly realized intensity. Her determined resolve, her ability to channel a variety of emotions at the drop of the hat, changing on a dime depending on the situation of a given moment, all of its is stunning.

There is a moment where a woman, drenched from a pouring rain, on the verge of giving birth any second, arrives at Claire’s clinic on its last night of operation. The midwife leaps into action, leading her team to do their best work at a moment’s notice even though none of them were supposed to have any patients that evening. It all builds to a stunning realization that brings everything marvelously full circle, Frot’s channeling of these varying emotional crescendos a beguiling symphony of the human condition that’s amazing.

Provost never dwells too long on any one scene, his directorial confidence apparent throughout. While this story does not go anyplace that’s particularly surprising, the emotions it displays unfailingly are. With Frot and Deneuve at the top of their respective games, with Gourmet adding tenderly soulful support, The Midwife ends up delivering on all fronts, making it a drama all involved should feel vast amounts of pride assisting in the birth of.