Darren Aronofsky’s latest mind-bending, psychologically dense feature Mother! is an indescribable piece of lurid pulp fiction that has to be seen to be believed. Black Swan? Noah? Pi? The Fountain? They’re all warm-hearted, easygoing walks in the park compared to this. Aronofsky has manufactured a tale that’s almost impossible to talk about, and that’s only partially due to the fact one doesn’t want to reveal any of its more twisted and unexpected secrets. No, the reason this film is so difficult to put into any sort of rational, straightforward context is because it’s certifiably insane, the loopy metaphorical psychosomatic textures of it all as unique as they are beyond description. 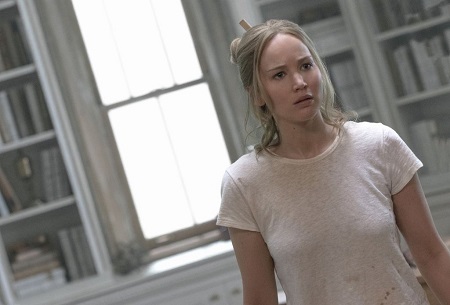 In a gorgeous old house out in the middle of nowhere, built in the middle of a large grassy field surrounded by gigantic trees on all sides, a poet (Javier Bardem) struggling with writer’s block leans on his beautiful wife (Jennifer Lawrence) for inspiration. She has determinedly restored the old house back close to its former glory after a devastating fire came close to destroying it sometime in the past, every ounce of her sweat, passion and love going into her work as she strives to make the place feel like home once again. One day a man (Ed Harris) enters their lives mistakenly believing the house is a bed and breakfast, the poet graciously allowing him to stay after both have a gentle chuckle over the mistake. The next morning, a woman (Michelle Pfeiffer) shows up to join him the two of having been married for quite some time, their mutual affection for one another clear the moment she walks through the door.

I honestly don’t know what else to say. I could attempt to compare everything that transpires next to films like Roman Polanski’s Rosemary’s Baby or Repulsion, but that doesn’t even begin to conceptualize the terrifying surreal craziness that ensues. I could talk about how Aronofsky is emulating the look and feel of a motion picture like Louis Malle’s Black Moon, but as bona fide nuts as that psychedelic 1975 effort is it’s still nothing to the lunacy that transpires here. Other directorial giants like Jean-Luc Godard, David Cronenberg, Alejandro Jodorowsky, Takashi Miike, David Lynch or Pier Paolo Pasolini could all be mentioned here, as could up and coming talents like Shane Carruth or Gaspar Noé, but even then it’s safe to say Aronofsky is cutting an idiosyncratic path that’s still uniquely his own.

What can be said, I guess, is that nothing is as it appears in Mother!. While the characters have no official names, Bardem’s poet is referred to as Eli a time or two, leading one down a path where maybe they could determine a certain biblical story might be at play here. At the same time, it’s equally likely Harris and Pfeiffer could be stand-ins for Adam and Eve, their two make children (portrayed by Brian Gleeson and Domhnall Gleeson) having a murderously difficult time getting along with one another. Or maybe Aronofsky has returned to the world of Noah, wrath and storms and fury and violence all raining down upon some who enter the house, especially as things build towards their epically heated climax. 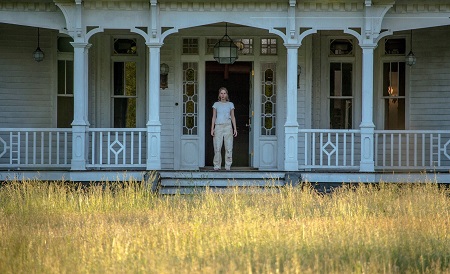 Yet, maybe there’s nothing biblical going on here at all. It could be that Aronofsky is looking at marriage from an entirely new light, utilizing metaphor and nuance to speak about the difficulties of maintaining a relationship over a number of years. Or he could be analyzing the ins and outs of parenthood, the tumultuous mixture of emotions that assaults parents as they attempt to raise their children into adulthood. Maybe it’s all even bigger than that, the director looking at the world, the way so many laugh in the face of science, cavalierly play havoc with the environment, use religious fervor for their own personal gain and otherwise go about destroying the very planet they purport to love without ever giving any thought to the generations who wallow in misery after following in their footsteps.

What I do know is that Lawrence, an Academy Award-winner for Silver Linings Playbook and a four-time nominee since 2010, has maybe never been better than she is here, delivering a performance of such emotional depth and breadth watching her roam about this house as the titular character is revelatory. She’s mesmerizing, and no matter how strange things around the actress became it was never a question that this woman was the heart and soul around which all events transpiring inside this story revolved. Lawrence finds ways to bring forth emotions that are almost always unexpected, things building to a maelstrom of rage, revulsion and regret that left me amazed.

The best bits might be when she and Pfeiffer share the screen together. The Batman Returns and The Fabulous Baker Boys siren might not have a lot of screen time, but holy cow does she make the most out of every second Aronofsky gifts the three-time Oscar nominee. She and Lawrence are symbiotic perfection, the scenes where the two toss lines back and forth at one another truly spectacular. It’s hard to imagine the movie being nearly as successful as it is without either of them, and as great as Bardem and Harris might be, these two women are undeniably the main reason Mother! ends up producing the emotional kick to the head it ultimately does during its final moments. 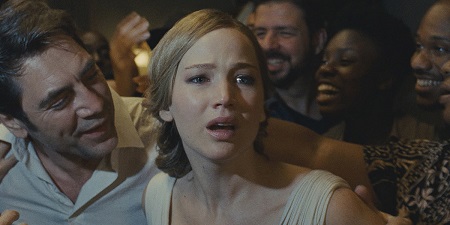 Yet this is Aronofsky’s show, there’s never any doubt about that. As dazzling as Matthew Libatique’s (Money Monster) camerawork might be, as dynamic as Andrew Weisblum’s (The East) editing is and as magnificent as production designer Philip Messina’s (The Hunger Games) interiors are, this is a director’s showcase, make no mistake. Aronofsky is at the top of his game, controlling every second with a confident virtuosity that’s staggering, and as pretentiously indecipherable as much of this can sometimes come off, there’s always the sense that everything being showcased is exactly as the director intends no matter how obtusely weird as various elements might initially appear.

I’m not sure who Mother! is for. I have no idea how audiences will react to it. For my part, I’m still sitting here days later stunned into silence trying to figure out exactly what it is I want to say. What I do know is that I hope people do take the time to see Aronofsky’s latest, that they screw their courage to the sticking place and go in blindly to the film ready and willing to see how everything the director splashes across the screen affects them come what may. This is a movie conceived by a master cineaste who knows how to surprise and amaze in a manner so few other filmmakers apparently do, the creative afterbirth left in this picture’s wake as gorily disgusting as it is spiritually magnificent.