Branagh’s Orient Express a Treat for the Little Grey Cells

It’s likely Agatha Christie’s 1934 classic Murder on the Orient Express might be the most influential mystery novel ever published. Featuring Belgian detective Hercule Poirot’s most bone-chilling adventure, all of it involving a cadre of diverse characters who initially appear to have nothing in common, it’s hard to imagine television series like “Perry Mason” and “Murder She Wrote” even existing had the author not crafted this particular tale. Heck, the board game “Clue” is essentially this story combined with Christie’s 1939 murderous whodunit And Then There Were None, all of it broken down into intuitive investigative basics fit for the whole family to gleefully enjoy.

As for this book, it’s been adapted a number of times, most notably by director Sidney Lumet in 1974 (for which Ingrid Bergman won the Best Supporting Actress Oscar and Albert Finney was a Best Actor nominee) and as part of the BBC’s long-running “Poirot” television series in 2010 (with the superb David Suchet returning as the titular detective and Jessica Chastain in a key supporting role). There’s even been a video game created for the PC in 2006, but even with Suchet’s participation there’s a reason not a lot of people know a thing about its existence.

Now comes director/star Kenneth Branagh (Henry V, Thor) and screenwriter Michael Green (Logan), the duo joining forces to bring Christie’s Poirot back to the big screen in a star-studded adaptation that, if it doesn’t rival Lumet’s 1974 version, at the very least equals it. Their Murder on the Orient Express doesn’t follow the book exactly, adding a character here, changing another’s race and nationality there, yet overall it still manages to capture the tone and the style of the author’s prose nicely. A handsomely mounted production, Branagh’s unfussy, classically professional style will not please everyone, its old school, visually resplendent largess of a type and an era seldom utilized all that much anymore. Yet I instantly responded to this aesthetic, losing myself inside the story, characters and images from the moment the cast first came together upon the titular train. I liked this version, and while I have minor nitpicks that gently gnaw at me, as someone who has watched every episode of BBC’s “Poirot” and “Miss Marple” television series and who was also schooled on the finer arts of Christie’s prose by an enthusiastic mother as a youngster, this still proves to be a movie I find very easy to recommend.

After quickly dismissing with a politically explosive case of thievery in Jerusalem, renowned Belgian detective Hercule Poirot (Branagh) is off back to London to solve another mystery even though he’d rather go on vacation. Booked on the fabled Orient Express for what he thinks will be three days of relative peace and quiet, things take a decidedly nasty turn when the train is derailed by an avalanche and one of the more egregiously disreputable passengers ends up stabbed to death in their First Class compartment. With no one else to handle the case, Poirot takes charge, rounding up the small group of passengers in order to investigate their backgrounds in order to ascertain who has committed this heinous act. What he discovers is a plot so byzantine it puts even his phenomenal little grey cells to their ultimate test, the solution to this particular mystery leaving him shaken and disturbed in a way no other case up to now ever has before.

The cast list portraying the various passengers includes Michelle Pfeiffer, Penélope Cruz, Judi Dench, Daisy Ridley, Johnny Depp, Derek Jacobi, Josh Gad, Lucy Boynton, Tom Bateman, Willem Dafoe, Leslie Odom Jr. and Olivia Colman. Many of them are utilized wonderfully, most notably Pfeiffer, Ridley, Odom Jr., Dafoe and Jacobi. Others, like Cruz and Colman, sadly don’t get the chance to make much of a lasting impression. Some, like Dench, Gad and Depp, make the most of what is offered them, delivering the best possible performances all things considered. Yet, even with this imbalance, for the most part Branagh and Green do a solid job of painting a clear picture of what is going on and why things are happening as they are, each character their own distinct human being worth keeping an eye on in case they happen to turn out to be the killer.

Where the movie truly excels is on a technical front. Haris Zambarloukos’s (Locke) shoots on 65mm, his handsomely luscious camerawork achieving a chilling majesty that suits the material perfectly. Jim Clay’s (Woman in Gold) production design is equally luminous, his crafting of the Orient Express’s magnificent interiors sublime. Best of all might be Oscar winner Alexandra Byrne’s (Elizabeth, Elizabeth: The Golden Age) bravura costumes, her attention to detail felt in every last thread and button she designed for the actors to wear. Frequent Branagh collaborator Patrick Doyle (Much Ado About Nothing) also makes magic of the film’s evocatively melancholic score, a few of his themes having a haunting eloquence that shook me right to the bone.

As for the director’s performance as the famed detective, I’d be lying if I didn’t admit to saying both his Belgian accent as well as his massively curly mustache didn’t get me to giggling on more than one occasion. Yet, while no one will confuse Branagh’s work here with his brilliant turns in Henry V, Dead Again, Hamlet or Rabbit-Proof Fence, that does not make his gloriously theatrical presentation any less masterful. As self-indulgent as casting himself in the role might appear to be, he’s still terrific, especially as things twist and turn their way towards the story’s emotionally catastrophic finale, the veteran actor tapping into a place of such profoundly miserable regret and disappointment the overall effect it ended up having on me was nothing less than devastating. 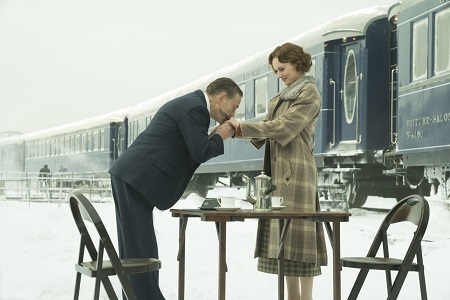 There’s no reason to go into great detail on the plot more so than what I’ve outlined above. Same with talking about which actor plays which role and what their individual significance in the proceedings might prove to be. For those unfamiliar with Christie’s novel or with prior versions of the story, not knowing the specific details will likely increase the odds they’ll like Branagh and Green’s adaptation. If they are familiar, then it goes without saying my talking about it here won’t add anything new to the conversation. More, my staying mum might mean that the various changes the filmmakers have made to the material might come as something of a moderate surprise.

As for the overall movie, I liked to what Branagh was doing. While his typical Shakespearean swagger cannot be found, there is still a confident playfulness to his handling of things that brought a smile to my face. Even if some of the plot points feel a little underdeveloped, and even though a few of the characters never spring to life the same way here as they do in the novel, the director still does Christie proud, his version of Murder on the Orient Express a gorgeously widescreen old school mystery I’d happily watch again right this second.