Philip (Sam Claflin) is angry. He believes his widowed cousin Rachel (Rachel Weisz) was responsible for the death of his beloved benefactor Ambrose Ashley, the man’s surreptitiously sent letters chronicling a series of mind games played on him by his new wife that surely helped send him to an early grave. Philip lets his solicitor and ward Nick Kendall (Ian Glenn) and his charming daughter Louise (Holliday Grainger) know in no uncertain terms he will find a way to learn the truth about what happened to Ambrose, his rage over his passing seemingly without end. 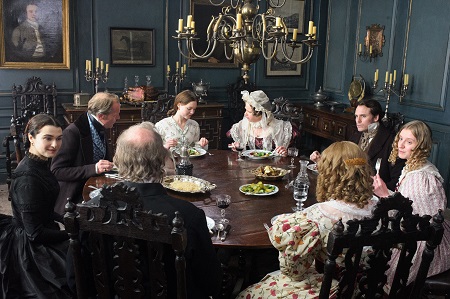 But when Rachel arrives at her late husband’s estate, scheduled to be turned over to Philip the day he comes of age, she turns out to be nothing like the woman described in Ambrose’s letters. Kind, intelligent and giving, she quickly ingratiates herself with all she encounters. This includes Philip, who suddenly begins to look at those letters in an entirely new light. In fact, he begins to think that the estate should no longer go to him, but as Rachel is Ambrose’s widow it should fall to her instead. But when he starts losing his strength, when illness begins to overwhelm him, uncertainty once again clouds the young man’s mind, the line between his cousin’s guilt or innocence so razor thin it’s almost as if it has vanished entirely.

Those familiar with author Daphne Du Maurier’s enduring novel will know going in that ambiguity is the name of the game where it comes to My Cousin Rachel, this story refusing to spell out exactly whether or not Ambrose’s death was of natural causes or if Philip’s suspicions have any concrete merit. It builds with a romantic melancholy that is all-encompassing, moments of levity and benevolence liberally sprinkled throughout to ease the tension. At the center sits Rachel herself, her coy, upright reserve a defense mechanism against the snobbish male patriarchy of the day, making it an understated tool she slyly utilizes to engender sympathy from everyone she meets.

Adapted for the screen by director Roger Michell (Changing Lanes, Morning Glory), the movie does a fine job of never revealing Rachel’s guilt or innocence. She remains a forceful enigma, a woman who must manufacture the correct persona for each situation she finds herself in. Weisz toys with these facets of the character, spins them round in never-ending circles as she walks a precariously skeletal emotional line, revealing precious little about Rachel save what is necessary, making her a fascinating compendium of emotional nuances that’s tremendous. The actress elicited my sympathies while at the same time she aroused my curiosity, and even as someone who has read Du Maurier’s tome multiple times I still found myself mesmerized by the intimate complexity of the performance.

Yet, even though Rachel is the titular figure around which all suspicion and mystery is centered upon, this is still Philip’s story and such is told from his point of view. Michell centers the character in a way that initially makes him the epitome of wealth and privilege, because even though he was orphaned as a child his circumstances at birth were such that, in large part thanks to Ambrose, his place in 19th century British society was never going to be in doubt. The arrival of his cousin forces the young man to reconsider his life and what he’s been doing with it. He must come to a realization that his haughty, self-possessed selfishness, whether intentional or not, has been central to his initial assessment of Rachel, it never even occurring to him to put his privilege aside and place himself inside her shoes.

As such, Michell attempts to put the white male patriarchy under the microscope, expanding on themes and ideas present in Du Maurier’s source material in a manner that feels purposefully designed to reflect conversations going on in today’s cultural zeitgeist. But he’s only partially successful on this front, mainly because he’s streamlined portions of Philip’s story to the point a handful of his decisions don’t feel as organic as they do in the book (or, for that matter, the 1952 version directed by Henry Koster starring Olivia de Havilland and Richard Burton). His snap decisions as they pertain to his cousin, the ways in which he slowly becomes infatuated with her to the point of budding madness, there just isn’t a lot in the way of flow to these transitions, most of them happening more because the story requires them to, not because they feel authentically sincere.

Thankfully, Claflin bails the director out, the actor displaying an effortless urgency that allows even the more unwieldy or irregular transitions to sparkle with far more eloquence and emotional resolve than they likely deserve. His psychological dissolution has a sweaty, ill-fitting luster, one that suits Michell’s take on the story perfectly. Claflin, already turning in one of the year’s more irresistible period performances in Their Finest, is potentially even better here, mining the varying shades of darkness and light that make up Philip’s perplexed disposition with a grizzled, increasingly imprecise fortitude that’s masterful. 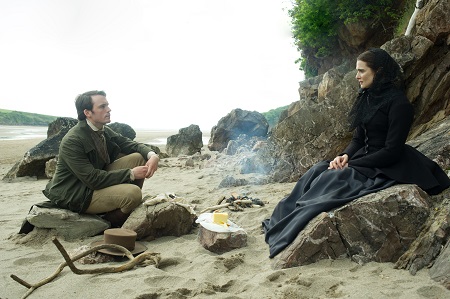 Another nice touch on Michell’s part is how he handles Louise. He makes her a far more active participant in the story than I remember her being in Du Maurier’s novel, the director allowing Grainger to put a seductively Machiavellian spin on the young woman that’s eerily unnerving. Louise pops in to poke and prod Philip, planting seeds of doubt that, if they were to germinate, could prove to be disastrous for all involved. But if they were to go unnoticed? If they were allowed to take root but not openly flower? She might get all her heart desires, Grainger’s crafty, multilayered performance allowing Louise to spin a seemingly innocent web that’s nowhere near as innocuous as those trapped within it might initially surmise.

Ultimately, it is the performances of the three stars, Grainger, Claflin and especially Weisz, that ends up making My Cousin Rachel worthwhile. Michell’s handling of the material is continually confident if not always focused, and he definitely has trouble where it comes to showcasing Philip’s psychological decay in a manner that doesn’t feel moderately contrived. But by giving Louise a bigger stake in the outcome, by refusing to reveal Rachel’s role one way or the other as it pertains to Ambrose’s demise, there is a strong, deeply disquieting emotional component that is disturbingly effective.  Michell does Du Maurier’s story proud, the finished film offering up a quietly tragic romantic melancholy I found impossible to resist.