Jackson Healy (Russell Crowe) isn’t a detective, but he’s very good at dealing with problems. For a price, he’ll mess up those messing with his clients, doing what needs to be done to make sure the message to cease, desist and, most of all, stay away is understood. It’s a job he’s quite proud of, and he’s got the bloodied brass knuckles to prove it. 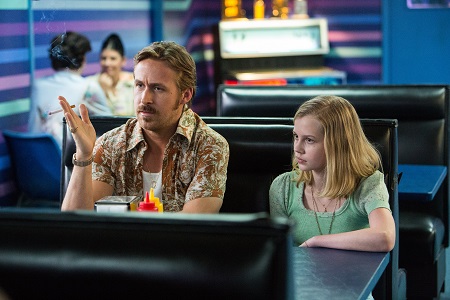 Holland March (Ryan Gosling) is a private investigator. He’s also a single father, his teenage daughter Holly (Angourie Rice) far better at taking care of him than he is of her. Still, once upon a time, before his wife’s untimely death, before the chain-smoking and the alcoholism, he was a pretty good detective, and every now and then the itch there is more going on with a case than meets the eye leads him to uncover truths few others would have surmised.

Cribbing from a number of his best-known scripts, mainly Lethal Weapon, The Last Boy Scout and most notably his 2005 directorial debut Kiss Kiss Bang Bang, Shane Black’s The Nice Guys is freewheeling, 1970s-set, comedic Los Angeles noir that makes up in laughs what it lacks in originality or coherence. Co-writing the script alongside Anthony Bagarozzi, the movie is an unruly, vulgar, uncouth and unashamedly violent romp through a number of genre conventions, all of them servicing a Chinatown meets The Big Sleep meets L.A. Confidential-style thriller that’s so joyfully entertaining it almost doesn’t matter if little of the darn mystery makes a lick of sense.

Everything revolves around a missing girl, Amelia (Margaret Qualley), and the plethora of interested parties who are eager to ascertain her whereabouts. This includes Judith Kuttner (Kim Basinger), the young woman’s mother, who also just so happens to be an attorney for the Justice Department, who hires March and Healy to find her before any of the others do, the two forming an uneasy partnership as they try to figure out what is going on and why. It all revolves around the California porn industry, Detroit’s Big Three automakers and the late ’70s environmental protest movement, mayhem and death tracking Amelia’s every move for reasons too convoluted to try and explain.

The whole thing is absurd, and part of me can’t help but think it is purposefully so, Black playing with a number of hard-boiled genre conventions much in the same way he did with the astonishingly underrated Kiss Kiss Bang Bang. It even follows something of a similar game plan what with two mismatched sleuths stumbling into a partnership as they assemble a crazy, disjointed puzzle the pieces of which don’t look like they’ll ever fit together until they miraculously do. Here, he also throws in 13-year-old Holly (reminiscent of The Last Boy Scout and The Long Kiss Goodnight, Black never one to shy away from putting kids in perilous situations), the youngster arguably the smartest player on the court, figuring out the ins and outs of the mess they’re all stranded within long before any of the adults do.

But, make no mistake, this is the Crowe and Gosling show right from the start. Both actors not only show sparkling comedic rapport, they also go out of their respective ways to give each of their relatively one-dimensional antiheroes having layers and complexities that the script only hints at. The latter shows zero fear as far as looking like a fool is concerned, while the former brings a battle-scarred emotional weariness to things that’s a little surprising. More than that, though, the two have an almost Abbott and Costello-like air to their interactions that’s hysterical. Even the nastier portions of the film have a comedic bent that’s made infectious almost entirely thanks to them, Crowe and Gosling proving to be as inspired a pairing of major male stars as any in recent memory. 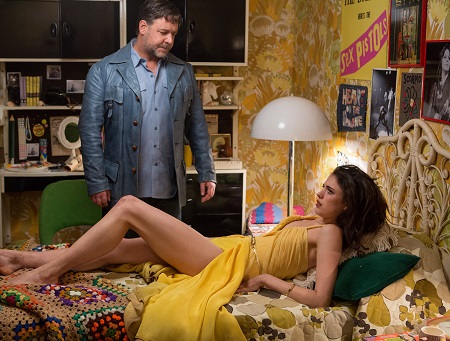 It all does feel more than a little too thin at times, almost as if Black and Bagarozzi were one more rewrite away from crafting something truly special. The majority of the villains feel like thinly crafted afterthoughts, while Matt Bomer’s primary thug is nowhere near as menacing as I kept hoping he would be. As for the identity of those pulling the strings, figuring that out is easy (and, admittedly, not exactly the point), so there’s little shock and even less awe as Healy and March realize little, if anything, is going to work out as they both hoped it would.

I like the ruthlessness of it all, however, Black not even slightly afraid to push the envelope almost as far as he can. There’s also a strong case to be made that he and Bagarozzi have crafted a love story of sorts here, the playful, almost romantic give and take between the two heroes ultimately kind of sweet, Healy and March appearing to plant the seeds of a relationship that could at some point progress far beyond platonic. Featuring crackerjack action sequences and bursting with an infectious sense of humor that’s laugh-out-loud hilarious, The Nice Guys is a major blast, Crowe and Gosling having the time of their lives bringing all this madcap, blood-splattered lunacy to life.