Paramedic trainee and grocery store clerk Holly (Abigail Hardingham) has a crush on her brooding, sexy coworker Rob (Cian Barry). After the death of his beloved Nina (Fiona O’Shaughnessy) in a horrific automobile accident, he was apparently so distraught he attempted suicide, loving her so passionately that he just couldn’t imagine going on without the young woman by his side. Rob even maintains a relationship with her grieving parents Dan (David Troughton) and Sally (Elizabeth Elvin), showing up at their home once a week for dinner. 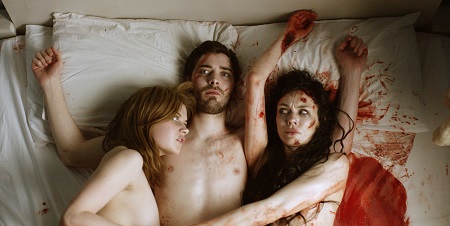 Holly becomes obsessed. She manages to work her girlish charms on Rob, gets him to open up, talk to her and, ultimately, enter into a relationship. But with things looking up, with psychological scars in the process of healing, who shows up the first time the two of them decide to have sex but Nina herself. Broken, battered, bruised and bloody, she’s back right there in the bed with Holly and Rob all the same, adding her own mordant input as to whether she thinks the two have future together or if they’re both delusional for giving this relationship a go.

Written and directed by brothers Ben and Chris Blaine, the horror-comedy-romance Nina Forever is as out there and as weird as a story can get. It’s almost as if Noah Baumbach and Joe Dante decided to work together on a feature, the film on one level a thought-provoking, hard-hitting examination of young lovers dealing with feelings of inadequacy, grief and loss, on the other a ghoulish morality tale with a bloody undead corpse pulling all the strings. The movie never goes exactly in the direction I thought it would, twisting and turning in upon itself to the point it refreshingly begins to wear its most potent emotions as a proudly displayed tattoo.

The element that will initially catch most by surprise is Holly’s decision where it pertains to Nina. While unsurprisingly shocked and terrified the first time she literally materializes in all her gory, mutilated glory from the bed sheets, it’s what the young paramedic student does next that’s the truly shocking element. Holly doesn’t just come back to Rob, she decides to give sex with him another go, coming to the conclusion that his dead girlfriend’s reappearance is directly tied to his inability to get over the terrible tragedy of her actual demise. By accepting Nina, by making her an active part of their lovemaking, she believes this will allow him to let go of his grief, and, in turn, grant this grotesque specter a form of peace in the afterlife that for whatever reason she at the moment is not finding.

It’s perverse stuff, that goes without saying, elements bordering on necrophilia brazenly portrayed in as honest and as forthright a manner as possible. Funny thing, the script is also amazingly perceptive, the Blaine brothers tackling a number of dramatic issues in a fashion that’s intimate, heartfelt and deeply affecting, utilizing a sardonic wit and grotesque point-of-view that’s decidedly original. But what is most interesting is the turn of events that end up presenting Holly as the central figure around which all of this madness ultimately ends up revolving around, concepts of self, identity and purpose coming to the forefront with striking clarity.

Hardingham, a young British actress mostly known for her extensive television work, is excellent, making all of Holly’s actions feel unnervingly believable as events begin to spiral outside her control. There is a sensational moment where the paramedic trainee finds herself in the center of a horrendous wreck, multiple vehicles strewn across the country road like shreds of paper blowing in the breeze. Hardingham navigates through a series of emotions, all of which feel natural and authentic, ultimately coming to a place of determination and selfless sincerity that’s just incredible.

O’Shaughnessy is also excellent, asked to walk a creepy fine line navigating between the realms of horror, comedy and overblown melodramatic excess as if it were no problem at all. More, she’s forced to do it with her body contorted into a mangled disgusting pretzel, the sheer physicality of it all undeniably impressive. That O’Shaughnessy does all this in a way that doesn’t just revel in the shock and the awe of it all is wonderful, the fact she does it while also uttering only a handful of lines and is still able to construct a complex three-dimensional character even more so. 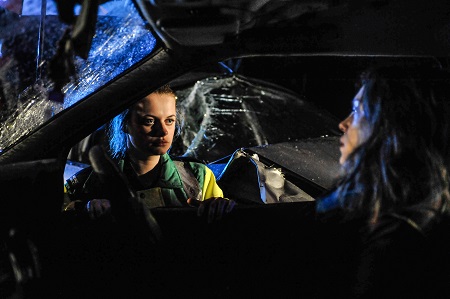 Barry doesn’t rise as high as his two costars, the actor a little one-note in both presentation and delivery. I still liked him, and the actor certainly fits the bill physically, but emotionally he’s a little bit of an empty shell, and I can’t say I always understood why Holly would be so driven to ease his psychological pain or what it was about him that would bring Nina back from the gravel. The only caveat here is Barry’s interactions with both Troughton and Elvink, especially towards the end of the film, the three of them having a terrific moment of unvarnished dinner table honesty that’s striking.

There is an unvarnished innocence to Nina Forever that I was decidedly captivated by. The Blaine brothers mine universal territory here, embracing emotions familiar to just about everyone, doing so in the context of a love triangle where one party to the affair is a talkative corpse. By embracing pain, by understanding sadness, Holly is able to learn things about herself she’d never have acknowledged otherwise, allowing a form of self-actualization to occur that’s as haunting as it is powerful.