Sensational Only the Brave an Honest Tale of Heroism and Sacrifice

Eric Marsh (Josh Brolin) has a dream. No group of municipal firefighters has ever achieved the designation “Hotshots,” a term the Forest Service utilizes special units that battle forest fires from the outside in, drawing lines in the sand while fighting fire with fire, trying to establish borders and creating back burns they can utilize against the wildfire. Only federally-trained units could be cataloged as Hotshots, and with the assistance of Prescott, Arizona Wildland Fire Chief Duane Steinbrink (Jeff Bridges) Marsh was determined to prove that his 20-man unit could perform at a level equal or above any the Forest Service currently employed. 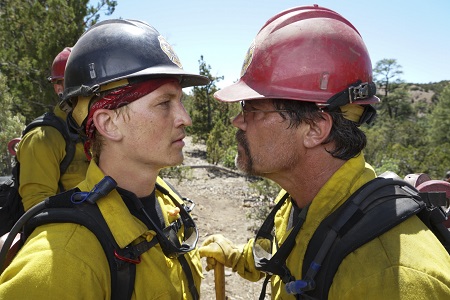 Only the Brave is the story of the Granite Mountain Hotshots, a courageous group of municipal firefighters from Prescott who quickly made a name for themselves as an elite unit of wildfire experts tasked with battling blazes throughout the United States. The movie focuses on Marsh, his relationship with wife Amanda (Jennifer Connelly), the unit’s struggles to be designated “Hotshots” and the introduction of a troubled new member, Brendan McDonough (Miles Teller), just at the moment the Forest Service was starting to take the crew seriously. It follows them as they crisscross around the United States doing what they do best, emphasizing the relationships between the men, everything culminating at the 2013 Yarnell Hill Fire in Arizona that proved to be one of the deadliest in recent U.S. Forest Service history.

It takes screenwriters Ken Nolan (Black Hawk Down) and Eric Warren Singer (American Hustle), working from the GQ article “No Exit” by Sean Flynn, and director Joseph Kosinski (Oblivion) a little while to find solid footing as far as this movie is concerned. The opening passages are lumpy, featuring ham-fisted introductions to a few of the primary characters while at the same time showcasing a potentially maudlin heavy hand that would unquestionably grow increasingly tiresome had it been utilized for the film’s duration. True story or no, there came a point during the introductory act where I wondered why all involved had been drawn to tell this particular tale, the thought I needed to sit there for roughly another two hours not exactly bringing a smile to my face.

How wrong those sentiments proved to be. Quickly, and with striking authority, Kosinski finds his directorial footing and Nolan and Singer’s script starts showcasing an authentic character-driven complexity that’s immediately mesmerizing. The filmmakers dig deep into who these various men are, what makes them tick and how they banded together to become the heroes they unquestionably prove to be. Couple that with dazzling firefighting sequences, magnificent camerawork by Claudio Miranda (Life of Pi), dynamic editing from Billy Fox (Straight Outta Compton) and powerful score from composer Joseph Trapanese (The Raid 2), the movie starts hitting on all cylinders with a vigorous suddenness that’s astonishing, everything building to a shockingly heartfelt and bracingly honest climax of sacrifice and grief that ripped my heart clean from my chest and left it on display for all to see.

Brolin is superb. The level of depth he brings to Eric Marsh is something else, the easygoing way he makes all the varying emotions this haunted everyman is feeling positively stunning. He’s matched by Connelly, her performance an unexpected gem that builds in vigorous nuance as the story progresses. Together, they are as dynamic a pair as any 2017 has offered up to this point, their journey having a naturalistic intensity that held me spellbound. 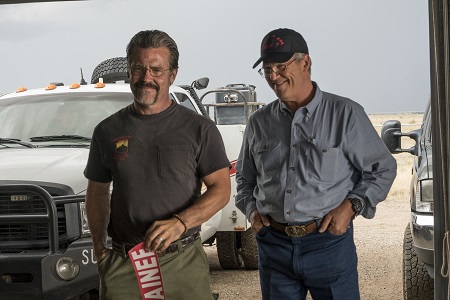 But they’re not the only ones doing exemplary work. Teller’s turn as the battle-scarred addict trying to turn his life around for reasons that are as fiercely personal as they are heartbreakingly universal is one of the best of the young actor’s career, and that includes his unjustly overlooked tour de force in the Oscar-winning Whiplash. Yet he’s matched by Taylor Kitsch and James Badge Dale, the duo portraying two longtime members of Marsh’s unit, the fast-talking showman Christopher MacKenzie and the stoic Granite Mountain Hotshots second-in-command Jesse Steed. Both men have far more to do than initially meets the eye, their expressive, multifaceted performances building in passion, power and urgency in hypnotic parallel with the film itself.

I’ve always felt Kosinski was talented, but looking at both TRON: Legacy and Oblivion it’s hard not to walk away from either sci-fi endeavor and not think this is a filmmaker who enjoys putting gorgeous, beautifully realized style up on the cinema screen over anything remotely substantive any day of the week. But that is simply not the case here. Only the Brave understands character has to come first, that if the viewer cannot relate to these men, their families and what it is they are setting out to accomplish nothing that happens during the film itself will resonate. Kosinski shows a subtlety I freely admit I did not anticipate, the level of restraint utilized in order to bring things to life frankly incredible. This is a seriously magnificent motion picture, one I’m almost certain to still be talking about as the year inches closer to its conclusion.