Asleep in hibernation aboard the Avalon in order to make the 120-year journey to the human colony of Homestead II, mechanic Jim Preston (Chris Pratt) is awakened out of his slumber due to a technical malfunction 90 years too early. With no way to go back into hibernation and only robotic bartender Arthur (Michael Sheen) to keep him company, the working class everyman is slowly going out of his mind, the sheer impossible loneliness of his situation more than any person should be forced to endure. 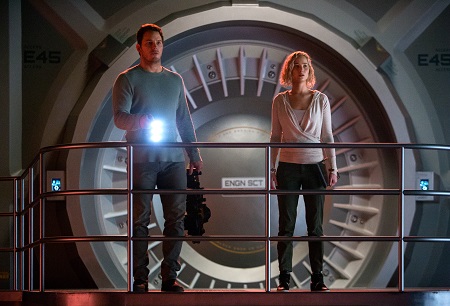 The other 5,000-plus humans aboard the ship still asleep, celebrated journalist Aurora Lane (Jennifer Lawrence) finds herself jolted out of hibernation. She had planned to become the first human to make the trip to Homestead II, live in the colony for a year and then return back to Earth, literally traveling through time in order to pursue the story to end all stories. But with that opportunity now gone, she’ll live with Jim aboard the Avalon, making the best of this bad situation as she feels is possible. Yet, unbeknownst to both their ship is in mortal danger, and if they don’t figure out what’s wrong all souls aboard will vanish into the cosmos as if they were never there to begin with.

Passengers has a catastrophic flaw lurking at its heart, and it is one director Morten Tyldum (The Imitation Game, Headhunters), his talented cast and screenwriter Jon Spaihts (Doctor Strange, Prometheus) cannot overcome. It casts a gigantic shadow over everything that happens from the one-third point forward, growing in unrelenting, unforgiving ferocity as things hurtle their way towards the film’s hyperbolically melodramatic conclusion. As appealing as Lawrence and Pratt are, no amount of endearing chemistry is enough to compensate for the distasteful idiocy of what the viewer is asked to forgive, the unhinged misogynistic depravity too extreme to comprehend let alone believe would be front and center in a major Hollywood spectacle circa 2016.

I’m honestly not sure how in-depth to go. What ends up happening isn’t so much a twist as it is a major plot point the trailers and other marketing elements have gone out of their way to conceal for reasons having nothing to do with how dreadful this narrative gambit turns out to be. But it is also the main thing that makes the movie such a ghastly disaster, the decisions one character makes in regards to the other a shocking caterwaul of inhuman lunacy that shouldn’t be glossed over or treated lightly. Yet Spaihts and Tyldum ask us to dismiss this turn of events as if they were no big deal, as if they could be easily gotten past, the romantic longings of the two leads supposedly more important than dealing with the very real issues at the center of their tumult.

What’s worse, it actually makes sense what transpires between the two considering the situation the characters find themselves in, and for a brief, solitary second it does appear the filmmakers are ready to confront the scenario they’ve concocted head-on and with intelligence. The initial emotional confrontation between the characters is strong, the reactions from both parties dripping in authenticity. But then the movie drops this issue, pretty much entirely, instead choosing to focus on rudimentary pyrotechnics and cataclysmic mechanical breakdowns that are too rudimentary to be interesting and much too rushed to produce anything close to approaching tension.

Seriously, the final act is an unconscionable mess. Even with Laurence Fishburne arriving out of nowhere to spell things out for the clueless, the veteran actor making the most of a character who only exists to bark orders and authoritatively deliver long mouthfuls of exposition, the climactic portion is flabbergasting. Not because it’s interesting, but because it’s terrible, laughably so, things playing out like a parody of the old “Star Trek” television series instead of something intense, serious and action-packed. Actually, it’s worse than that. These scenes are more like a parody of similar moments in Galaxy Quest, itself a send-up of the classic show, so that makes the last portion of this film a send-up of a send-up, which I hardly think were Tyldum and company’s intentions. 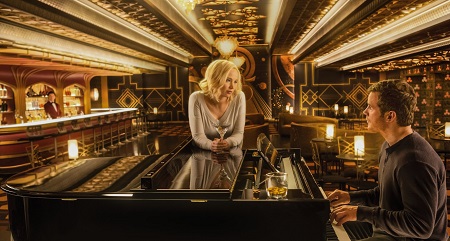 If I’m being fair, Passengers looks terrific. The visual effects are superb and Guy Hendrix Dyas’ (Inception) production design, while a little reminiscent of WALL·E at times, is stunning. Thomas Newman’s (Flesh and Bone) score is close to superb, while Rodrigo Prieto’s (The Wolf of Wall Street) luscious, invigorating cinematography is a continuous feast for the eyes. Best of all is the first act with Pratt wandering around the Avalon essentially all alone, his interactions with Sheen inside a golden ballroom straight out of The Shining remarkably close to perfect.

All of which makes the ruinous slow turn to mediocrity all the more disappointing. There are good ideas lurking at the heart of Spaihts’ screenplay, and there are moments when it appears that Tyldum is up to the challenge of doing something with them. But absurdity and stupidity battle head-to-head with sexism and misogyny, each fighting for supremacy in a duel to the death where there are no victors and the losers are those sitting in the audience being asked to treat any of this seriously. Passengers is pretty bad, and as ambitious and as well-intentioned as it might be that doesn’t make its failure to entertain any less massive.