Heartfelt Queen a Triumphant Tale of Resilience and Grit

Growing up in Katwe, a slum located in the Ugandan city of Kampala, things have not been easy for 9-year-old Phiona Mutesi (Madina Nalwanga) and her brothers and sisters. While their mother Nakku Harriet (Lupita Nyong’o) does what she can for her children, the truth is that there just aren’t a lot of options available to her. There is no money for schooling, and what they do make selling plantains or other items out on the streets goes to putting food on their table and making sure there is a roof over their heads. It’s a hard life, but one they are all struggling through together as a family, and while Phiona longs for more she just as readily understands chances of escape for either her or her siblings is alas unlikely. 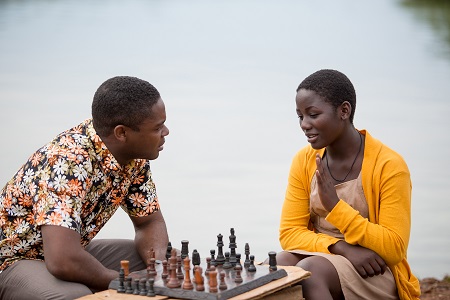 Or maybe not. Robert Katende (David Oyelowo) has come to Katwe with an idea to help the slum’s children, thinking that by teaching them the game of chess he might be able to show them how to engage their minds and begin to believe they can achieve more from life than they’ve been told is possible. But even he could not have anticipated Phiona’s genius. Turns out, she’s a prodigy, quickly immersing herself inside the game as if the pieces on the board were speaking to her. Robert comes to believe this youngster is destined for great things; now all he has to do is get her to think it, too, while at the same time convincing the child’s fiercely protective mother Nakku that chess will open doors for her daughter like nothing else could have.

Expertly chronicled in 2012 by writer Tim Crothers in an ESPN Magazine article, the true story at the heart of Disney’s Queen of Katwe is an instantly powerful one. Phiona’s story grabs the viewer by the throat, our collective desire as an audience to see this child succeed palpable on an unimaginable scale. But if that all there was, if the movie was only concerned with being a nuts and bolts reenactment of her inspirational story, then one could stick with the article and that likely would end up being enough. Instead, screenwriter William Wheeler (The Hoax) and director Mira Nair (Monsoon Wedding, The Namesake) dig even deeper, and in the process craft an underdog sports story that transcends its genre to become something close to extraordinary.

It helps that they duo rarely take the easy out. Even for a PG-rated Disney effort, they fearlessly explore Phiona and her family’s situation in Katwe in uncomforting detail, letting the reality sink in as the story progresses. There are hints to what is happening with her older sister Night (Taryn “Kay” Kyaze) that are decidedly adult, while the lengths Nakku goes to in order to see her children fed and remain healthy are never given a short shrift. Wheeler and Nair understand that, if the audience does not fully understand the situation Phiona is in, they will equally not be able to comprehend just how heroic her story turns out to be. While her willpower and intelligence are both impressive they are just as inspiring as the resilience and strength her mother showcases, the combination of these two characters the reason the movie ends up resonating as deeply as it does.

I loved the way that the film shows so much patience, that it allows things to develop at their own naturalistic pace. Phiona’s transformation into a world-renowned chess prodigy did not happen overnight but instead over a handful of years, Robert’s gentle nurturing of her gifts allowing her to take full advantage of them even with a handful of painful setbacks occurring along the way. Nair depicts this transition with delicious restraint, the youngster’s failures pointedly cruel, while her triumphs brought honest tears to my eyes I was more than happy to shed.

Newcomer Nalwanga is superb, delivering a performance of surprising complexity, the young actress not seeming to care if viewers always love Phiona’s decision-making abilities, especially as she begins to understand where her chess talents have the potential to take her. Nyong’o is equally terrific, proving her Academy Award for 12 Years a Slave was anything but a fluke as she delivers another emotionally multifaceted portrait of the human experience that’s nothing short of outstanding.

Then there is Oyelowo. Magnificent as Martin Luther King, Jr. in Selma, turning in memorable supporting turns in films as diverse as A Most Violent Year, Jack Reacher and Lee Daniel’s The Butler, he disappears so completely inside the role of Robert Katende I actually forgot the actor was portraying the character. He brings a level of understanding, a form of magnetic humanitarian forcefulness to the story that is breathtaking, his interactions with both Nalwanga and Nyong’o, as well as his charming back-and-forths with Esther Tebandeke, portraying Robert’s educator wife Sara, virtually perfect. It’s a monumental performance that helps add additional layers to the proceedings, his character’s journey in many ways almost as stunning as the one Phiona finds herself on. 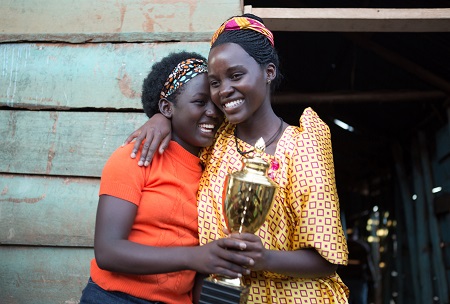 When Nair is matched up with material that speaks to her it’s as if she can do no wrong. One watches Monsoon Wedding, they take the time to absorb Salaam Bombay! or The Namesake, and they realize just how talented the award-winning director is. She’s in her element with this story, soaking up every detail like a sponge, spilling that knowledge out onto the screen and thus bringing Phiona’s tale to life with grit and grace.

If Queen of Katwe can’t escape all the genre trappings that are inherent to stories like this, that’s nowhere near the kind of problem it maybe could have been with a lesser director at the helm or a weaker script propelling things forward. Additionally, the outcome can’t really be in doubt because Phiona’s story is still so fresh, so out there in the public discourse, so whether or not she is going to find success in pursuit of chess glory isn’t really a question mark. Nonetheless, this is an astonishing film, one that enraptured me start to finish, the emotional gambit it ended up playing scoring a victory against my heart that was as expressive as it was final.