The idea at the center of The Secret Life of Pets isn’t a new one, but that doesn’t make it any less terrific. The concept of what our beloved pets are doing in their time alone has been an animated staple the world over, animators ranging from Walt Disney to Tex Avery to Chuck Jones to Hayao Miyazaki, to so many others taking a look at it in one way or another during their historic careers. It’s just one of those thought provoking questions anyone who has ever owned a dog, cat, rodent, bird or any other creature has wondered about at some point during their tenure as a pet parent, animation a perfect platform to explore thoughts and ideas relating to it. 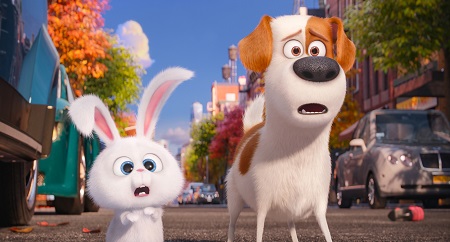 As such, the opening introduction to this particular film is just about perfect. It’s here we meet Max (voiced by Louis C.K.), a terrier who lives with his perky owner Katie (Ellie Kemper) in a gigantic apartment building deep in the heart of New York City. Things are perfect, the adorable canine spending the hours she’s away at work chatting with fellow pets living in the complex, including lazy, self-centered cat Chloe (Lake Bell) and perky white puffball Pomeranian Gidget (Jenny Slate) who can barely contain her romantic longings for her furry brown neighbor. But when Katie brings home gigantic mutt Duke (Eric Stonestreet) to live with them Max’s world is shattered, and the only thing he can think about now is the best way to get rid of the beast so things can go back to normal.

It’s all sounds very Toy Story, this opening not all that different in its way from how Sheriff Woody and Buzz Lightyear make one another’s acquaintance at the beginning of that 1995 Pixar classic. More to the point, this initial sequence of events is instantly endearing, piquing my interest while also capturing my heart. Writers Ken Daurio (Despicable Me 2), Brian Lynch (Minions) and Cinco Paul (The Lorax), director Chris Renaud (Despicable Me) and co-director Yarrow Cheney do a wonderful job setting things up, and for my part after the first ten minutes I was incredibly excited to discover where the lot of them were going to take things next.

I shouldn’t have gotten my hopes up. The group, I imagine emboldened by the success of Minions, take things in increasingly outlandish and annoyingly violent directions, allowing the film to descend into madness and chaos seemingly because they all collectively believe that’s what kids will find entertaining. What they appear to be going for is some sort of crazy, over the top reworking of ideas present in animated efforts as diverse as The Aristocats, All Dogs Go to Heaven, Oliver & Company and A Bug’s Life. Problem is, there is no story cohesion, no semblance of structure holding one strand of the narrative together with the one strung alongside next to it. Worse, it all grows increasingly off-putting as things progress, the distasteful central twists and turns getting uglier and more noxious with each passing minute. 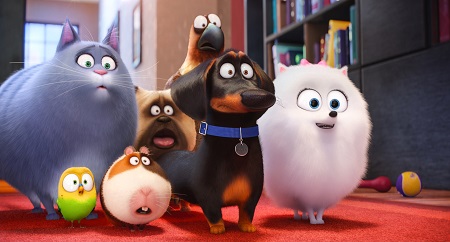 The central twist here involves Max and Duke getting lost in the wilds of the Big Apple, literary forced into the sewers as they come across a gigantic gaggle of displaced critters intent on showing their former human masters they’re not as all-powerful as they think they are. Their leader is an angry bunny named Snowball (Kevin Hart), and to call him one of the more annoying animated characters to grace the screen in quite some time is a giant understatement. Hart tries his best, his rat-a-tat-tat delivery not without its humorous charms. But Snowball is a vapid, insipidly composed character whose loathsome qualities are never tempered to the point they could ever be redeemed, tolerating him or his antics pretty much impossible.

Like Minions, and to a lesser extent the two Despicable Me adventures that first introduced the yellow pill-shaped nincompoops, the filmmakers turn The Secret Life of Pets into a series of vignettes, short little bursts of adrenaline that barely relate one to the other. It’s a lot of crazy lunacy that includes massive depictions of rampant destruction, acts of ghoulish carnage and a lot of shrill moralizing that’s moderately offensive. But the worst thing the filmmakers do is waste their premise, turning it into a random circus of chase and escape that barely relates to the ideas present in the opening act and promised right there in the title. The movie isn’t good, the fact that it could have been, arguably should have been, is maybe the most dispiriting aspect of all this nonsense, and it’s likely my disappointment makes me despise it even more than I potentially would have otherwise.