Elisa Esposito (Sally Hawkins) works in a top-secret government research facility as part of the cleaning staff. As she is mute, she lets good friend and coworker Zelda Fuller (Octavia Spencer) do much of the speaking for her, even though Elisa is hardly shy about letting her true feelings be known if she feels it is imperative she does so. The young woman lives alone in a somewhat spacious apartment above an old movie theatre, her next door neighbor Giles (Richard Jenkins) a kindly artist currently working on a project he hopes will allow him to regain his job at a prestigious advertising agency. All-in-all, it’s a good life, and although Elisa oftentimes longs for more, especially as it pertains to romantic companionship, she honestly doesn’t have a lot to complain about. 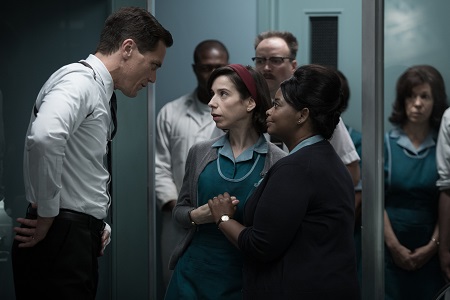 Then U.S. military enforcer Richard Strickland (Michael Shannon) arrives at the research facility with his strange, unbelievable cargo. Turns out, he’s come with a team of new scientists led by Dr. Robert Hoffstetler (Michael Stuhlbarg) to study a miraculous find, a strange Amphibian Man (Doug Jones), a gigantic creature who lives in the depths of the oceans but can still walk upon dry land on two legs for a limited period of time. While understandably scared to the point he can become dangerously ferocious when poked and prodded, Elisa still finds a way to communicate with the creature, the two developing a mutual understanding that is heartfelt, genuine and pure. But when she, along with assistance from Zelda and Giles, helps this human animal escape from the facility, Strickland is enraged beyond the point of no return, the line between man and monster blurring to the point of invisibility.

This is the world conjured up by writer/director Guillermo del Toro (Crimson Peak, Hellboy) and co-writer Vanessa Taylor (Divergent, Hope Springs) in their 1960’s-set supernatural romance The Shape of Water. Touching on topics ranging from gender relations in the workplace, sexual orientation, race, identity and the very concept of what makes an individual a human being, the film is a masterful love story that moves at its own pace, never caring if the audience is offended by any of the various twists and turns that might ultimately transpire. It is an ethereal bit of escapism that, much like the director’s best works, specifically Pan’s Labyrinth and The Devil’s Backbone, has far more on its mind than one might initially surmise, all of it looked at with a wide-eyed innocence that’s emotionally haunting.

It’s always been evident that del Toro loves his characters no matter how despicable or abhorrent some of them might end up becoming. This is especially true this time out. Giles isn’t perfect. He makes bad decisions, lets his own wants and desires sometimes get the better of him. But he loves Elisa dearly, his fatherly affection for her allowing him to reach past his own faults and attempt to do something selfless even though his own life isn’t anywhere near what he wants it to be. Zelda, too, doesn’t always say the right thing. But she’s direct, to the point and refuses to back down in anyway whatsoever when those she cares about most are in need, giving them the love and assistance they need whenever she can.

Then there is Strickland. In some ways he is the film’s most tragic figure. This shadowy figure wants to be a good man, longs to do right by his family, yet his own personal demons make being the traditional white picket fence stereotype practically impossible. On top of that, the pressure he is under to deliver results as it pertains to the hows and the whys behind this Amphibian Man’s existence are slowly crushing him into pieces, destroying his humanity as the homicidal creature lurking beneath his skin is uncomfortably revealed. It’s obvious del Toro pities Strickland even as he refuses to apologize for him, redemption hard to come by for a man who refuses to comprehend just how fully he’s murdering his own soul in an overzealous pursuit even he doesn’t fully understand. But the center revolves around Elisa and how she views the world. She is a character who has always felt like she was an outcast, like something about her just wasn’t right. Her friendship with Giles gives her insight into joys she’d never pondered beforehand, but even those do not compare to what happens when she discovers she can communicate with the creature hidden in the most secure recesses of the research facility in which she works. They immediately bond, and it is that relationship that gives del Toro’s movie its magnetic vitality. It helps crystallize what is being said about race, gender and humanity in ways that are startlingly effective, the metaphors being explored as intimate as they are sincere. 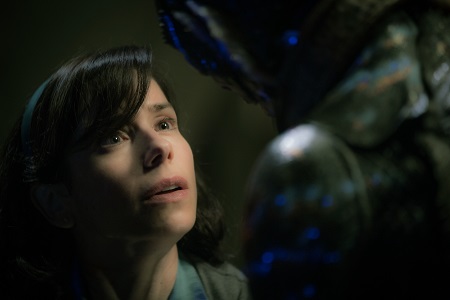 As superb as Hawkins is, and she is sublime as Elisa, it should be noted the character doesn’t actually evolve near as much as the characters around her do. She is pretty much the same person at the end of the movie as she was at its beginning, and while it’s wonderful to see where the woman ends her journey I cannot say I was as emotionally connected to her as I kept hoping I would be. Even so, Hawkins delivers a wonderfully complicated performance that is free of artifice or melodramatic excess, and while I might have preferred her turn in her other 2017 release Maudie, that does not mean I feel the actress is still anything less than excellent.

As for the movie, this is one of those adventurous pieces of cinematic imagination I find I like more and more as time goes by. From Alexandre Desplat’s (Godzilla, The Imitation Game) devastatingly evocative score, to Dan Laustsen’s (John Wick: Chapter 2) hypnotically elegant cinematography, to Doug Jones’s stunningly unforgettable performance as the creature and to the magnificent makeup effects required to help him give the Amphibian Man life, everything combines together to produce a motion picture that’s unlike any other released this past year. But it is the eloquent emotional dynamism of del Toro’s handling of the material that carries the day, The Shape of Water not just a love letter to classic monster movies of old, but also an important addition to the dialogue concerning social responsibility, gender dynamics and the human condition we all need to be having right this very second. 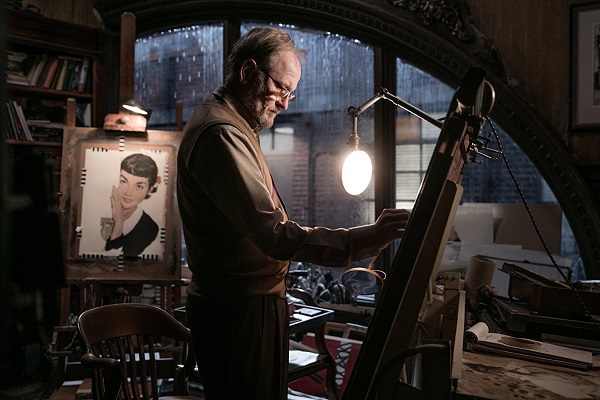