“You have been transformed to your full potential, Billy Batson. With your heart, unlock your greatest power.”

Here’s what I wrote about Shazam! back in my original theatrical review: 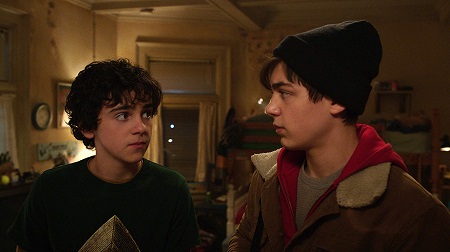 “Shazam! is a difficult movie to dislike. It’s the most consistently entertaining entry in Warner Bros and DC Comics superhero universe to date even if it isn’t as inventively insane as James Wan’s Aquaman turned out to be or if it doesn’t feature as many emotionally euphoric highs and intense sequences of action heroics as Patty Jenkins’ Wonder Woman offered up. Director David F. Sandberg’s (Lights Out, Annabelle: Creation) bubbly effervescent blend of kid-friendly comical antics and adult-centered moralistic conundrums is a solidly ebullient rollercoaster ride of comic book pyrotechnics that’s a heck of a lot of fun. I had a grand time watching it. Something tells me the majority of general audience members are going to end up feeling the same.

Shazam! is sort of like some strange, beguilingly euphoric amalgam of Big, Superman, Adventures in Babysitting and Freaky Friday. It is a movie built around the growing friendship that blossoms between Billy and Freddie, the two forming a strong brotherly bond as they try to figure out what Shazam’s powers are as well as what the best way for him to utilize them might turn out to be. It is a star-making showcase for young Grazer (last seen stealing scenes as the fast-talking Eddie in 2017’s It) as well as a terrific vehicle for ‘Chuck’ star Levi, the two sporting a rollicking give-and-take chemistry that’s something special. Screenwriter Henry Gayden (Earth to Echo) does a grand job of making this connection between the two feel authentically three-dimensional, Sandberg allowing both actors the freedom to craft these characters even when the inherent necessities of a superhero origin story threaten to derail the film’s momentum and place things on an all-too-familiar track I’ve ridden upon any number of times before. 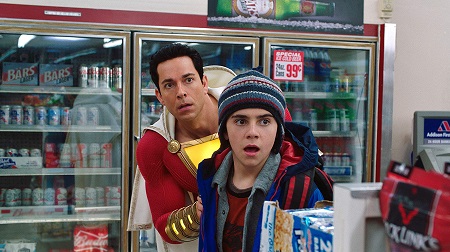 For my part I didn’t mind any of that. While a little leisurely paced, I still can’t say there was any time watching Shazam! where I felt DC’s latest superhero was failing to deliver the goods. The whole movie builds to a pleasing climax where a hero finds his true calling and a family makes the decision to stand together as one against all the ills of the world no matter what the cost might be. This is a story where the children literally lead the way, teaching all of us to look inside our hearts for the potential hero within whether we think they reside there or not.”

I’ll reiterate what I already said in that review: Shazam! is incredibly difficult to dislike. It’s just so good-natured and affable, making the movie an awful lot of fun to watch even if some of the stuff with the Seven Deadly Sins does get a tad violent and gruesome and might moderately scare younger viewers. But that’s not a complaint, and I maybe had a better time watching this one again at home than I did when I first watched it theatrically. It’s just flat-out entertaining, this effervescent burst of superhero fluff a bubble good time that couldn’t help but put a smile on my face.

Shazam! is the most consistently entertaining film Warner Bros has released as part of their DC Extended Universe tales. It’s an enjoyable lark that taps into some pretty sensational giddy juvenile wonders, it’s massive heart overflowing in themes about kindness, responsibility, friendship and family that are nothing short of timeless. Warner’s 4K presentation is immaculate, and as such this release comes highly recommended.