After a midnight theft of a shipment of cocaine goes wrong and leaves two men dead, Las Vegas Detective Vincent Downs (Jamie Foxx) and his partner Sean Cass (Tip “T.I.” Harris) take charge of the investigation over the vociferous objections of dogged internal affairs officer Detective Jennifer Bryant (Michelle Monaghan). She believes the two are dirty, while Downs and Cass want to be handling things in order to make sure fingers don’t get pointed back at them. It’s going to be a battle of wills, Bryant certain hers will be the one to win the day as she attempts to learn the truth about what it is her prey is going to extremes to hide. 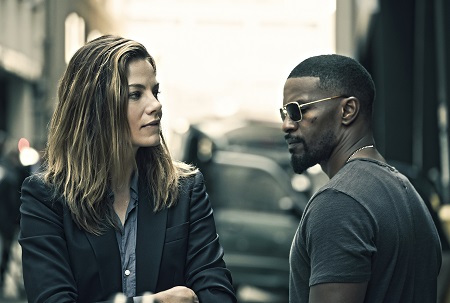 But there’s a wild card butting its way into this law enforcement main event. Casino magnate Stanley Rubino (Dermot Mulroney) was the guy scheduled to receive the lost cocaine. He in turn was selling it to Rob Novak (Scoot McNairy), the merciless enforcer for his feared mob family and not the type of guy you promise product to only to not deliver at the negotiated time. Understandably, Rubino wants his drugs back, and he’s kidnapped Downs’ 16-year-old son Thomas (Octavius J. Johnson) in order to force the detective to get the shipment back for him.

Little is as it appears in Sleepless, director Baran bo Odar (The Silence) and screenwriter Andrea Berloff’s (Blood Father) violent remake of French filmmaker Frédéric Jardin’s well thought of 2011 action spectacular Sleepless Night. Downs isn’t who is supposed to be, but neither is almost anyone else save the detective’s son and his emergency room nurse ex-wife Dena (Gabrielle Union), the pair of them likely the only truly honest characters existing inside this nihilistic maelstrom of a thriller’s labyrinthine crevices. It’s an examination of how living in the aberrant extremes of society’s underbelly can darken even the purest heart, the line between hero and villain practically nonexistent by the time push meets shove and the excrement runs smack-dab into the fan.

All of which would be fine if the movie’s plot wasn’t so boneheaded, shooting itself in the foot every few second before finally emptying the entire clip into regions of the body that are far more lethal during the insanely flabbergasting, depressingly brain-dead excuse of a climax. This story just gets dumber and dumber as it goes along, and for all of bo Odar’s talents nothing he or his gifted cast can do can disguise just how dim the last act of his Hollywood debut ends up proving to be. By the time the double-cross turns into a triple-cross before morphing one more time into a quadruple-cross (or, at the very least, some meandering semblance of one), I wanted to throw my arms in the air and scream, a potentially fine remake destroyed seemingly because no one in charge of its making cared if the main narrative components made any sense or had any basis in actual everyday reality.

I was initially intrigued. The early scenes, while owing a major debt of gratitude to Michael Mann’s Heat, crackle with electricity and passion. Foxx plays Downs with world-weary intensity, his dead-eyed stare sending chills down my spine, especially as he grows more and more afraid of what will happen to his son if he can’t recover the drugs and return them to Rubino. Monaghan is equally appealing, her Mutt and Jeff rapport with David Harbour, playing Bryant’s laidback partner Doug Dennison, is lived-in and genuine, the duo sporting a somnolent camaraderie that’s easy to emotionally relate to and grasp. Finally, McNairy is an exceptional villain, the venom spewing from his mouth hinting at dangerous terrors even the Devil would likely blush at if they ever made the transition from threatened fiction to blood-splattered truth. 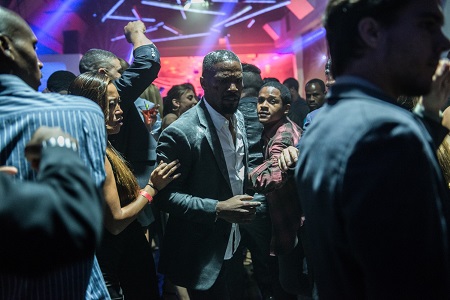 But a sense of time in this darn thing is entirely out of whack, spurious deadlines coming and going, and it’s never entirely clear how many hours it is all of this is happening in. Also, the metaphorical duality between Downs and Bryant is obvious and silly, so heavy-handed it almost becomes laughable by the time things reach their circus act of a clown car conclusion. Yet none of it compares to the actual lunacy of the climax itself, certain characters appearing for no practical reasons, while other supposedly intelligent individuals suddenly act if their skulls are filled with nothing more substantive than fluffy bits of cotton candy.

Even though I’ve heard a number of positives about Jardin’s Sleepless Night, sadly I’ve never found the time to give it a look for myself. With that being so, I cannot say how closely Berloff’s script mirrors the source material or how much she has changed in order to Americanize the setting and the characters. Not that it matters. This is dumb stuff, there’s just no other way to say it, and even if I liked the initial setup and felt the scenario was solid for a visceral B-grade thriller, the avalanche of stupidity that’s ultimately unleashed is just too massive to ignore. There’s a reason Sleepless has been dumped into theatres by its studio with precious little fanfare, its level of ludicrous mediocrity almost impressive if it weren’t so gosh darn disastrous.