Sonderkommando. Noun. In WWII Concentration Camps, a group of Jewish prisoners assigned to collect belongings and dispose of the bodies of other prisoners who had died or been killed. 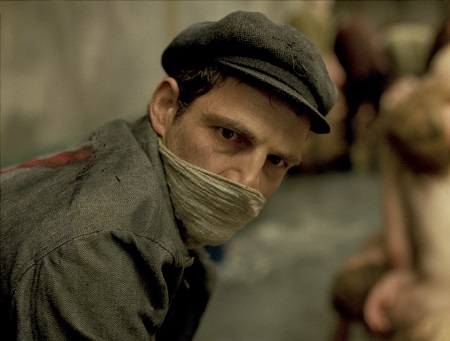 It is 1944, and Saul Ausländer (Géza Röhrig) is a Sonderkommando trying to hold on to his humanity amidst the unimaginable daily horror going on inside the Auschwitz-Birkenau Concentration Camp. While preparing the lifeless bodies of fellow Jews for cremation, he comes upon a young boy who somehow survived the gas chamber and is now lying in front of him gasping for life. This miracle is quickly snuffed out by a Nazi doctor more interested in the child for study than he is in saving his life, Saul more devastated than normal by what it is he has been forced to witness.

Something snaps. While many of his fellow Sonderkommando prepare for an uprising that will hopefully lead to their escape, Saul begins to believe the now dead boy is, in fact, his own son, a child he was separated from and in his mind failed as a father. Now, in death, he will provide the sort of love, care and understanding the Germans never allowed him to give him in life. Saul will save this boy from cremation, he will bury him, he will find a rabbi to recite the mourner’s Kaddish, and he will do all of this with Nazi soldiers watching his every step.

This is Son of Saul, a powerfully emotional masterpiece that ended up on my own top ten list as one of the best motion pictures of 2015 and was recently honored with an Academy Award nomination for Best Foreign Language Film. It is the narrative feature debut for Hungarian director László Nemes, the filmmaker forcing the viewer to see the Holocaust and life inside of a Concentration Camp in a way they likely never have before.

It is an intimate, claustrophobic descent into madness and death that can’t help but make one uncomfortable. At the same time, Nemes, who co-wrote the script with Clara Royer, manages to find hope residing inside all of this unimaginable horror, allowing for moments of familial reconciliation and redemption that are eloquent in their delicate, mournful fragility. While this story is smothered in tragedy, there is something poignant and cathartic about what Saul is attempting to achieve, all of it speaking to a form of spirituality and faith that crosses religious barriers to become something universal and timeless. 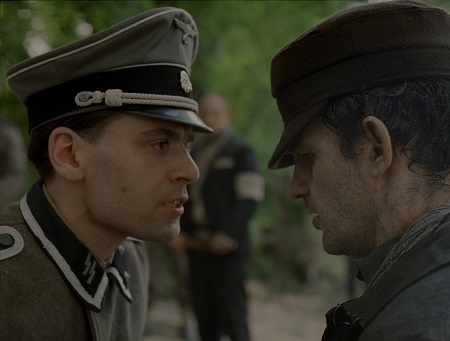 I’m not going to lie. Son of Saul is hardly an easy sit. Nemes has his cinematographer Mátyás Erdély (The Quiet Ones) shoot things in a never-ending series of boxy, handheld close-ups that only add to the sense of misery and despair that permeates every second of the motion picture. It is as if the director was forcing me to stand right next to Saul and his fellow Sonderkommando, was making me be subjected to every slight, every slap and every bullet right along next to them. It’s an immersive, clinically upsetting foray into this world that goes beyond documentary-like realism to become something else entirely, the collective madness assaulting these men in various ways and in differentiating forms doing the same to me as events progressed.

Röhrig is superb. His performance is raw, stripped naked to its marrow, the actor revealing things about the character and who he is as he doggedly does all he can to succeed in the task he has set in front of himself, consequences be damned. It’s an emotional tour-de-force that captivated me completely, all of it leading to a final moment between Saul and a mysterious second young boy that is as haunting as it is magical, tragedy and salvation weaving one inside the other in a way that caught me entirely by surprise.

In the end, the only thing I can compare Son of Saul to is Claude Lanzmann’s epic, groundbreaking 1985 documentary Shoah, the level of introspective objectivity eerily, and intimately, similar, even with Nemes’s debut being an entirely fictional enterprise. But it feels real, start to finish, and by the time it came to an end I found myself shaking and shivering in ways I seldom ever have. Important as it is essential, the movie is a remarkable achievement deserving of every honor and ounce of acclaim it has so far achieved, watching it a catastrophically profound experience I’m not soon to forget.