I cannot say I’ve ever understood the cult of Harmony Korine. I was young enough to be the target audience when his first scripted effort Kids (directed by Larry Clark) came out in 1995. Thanks to the fact we’re not too far apart in age I’ve felt compelled to follow the entirety of his career from that point forward, watching his 1997 directorial debut Gummo hoping for the best, walking into screenings of Julien Donkey-Boy to Mister Lonely to Trash Humpers the exact same way. 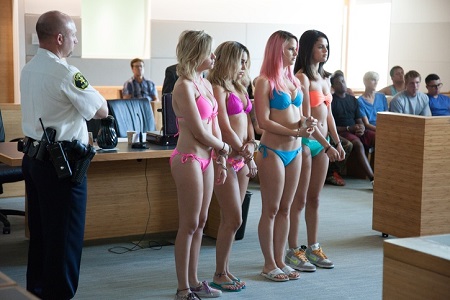 Be that as it may, I’ve never connected to a single one of his cinematic attempts, never felt a kinship with any of the characters or cared about what was taking place inside the narrative. I’ve respected his filmmaking acumen, his ability to channel his inner Cassavetes, Godard or Julien Donkey-Boy, but overall I just can’t quite get what all the fuss is about. For me, he’s always been a filmmaker who desires style, carnal, gut-busting, eye-popping, squirm-inducing style, over anything substantive, the points he tries to make about youth culture, growing up or revolting on the status quo continually lost on me.

With that in mind, it almost goes without saying that, for me at least, Korine’s latest hallucinogenic young adult frolic Spring Breakers is the first of the director’s works I’ve responded to in any sort of moderately positive fashion. Arguably his most accessible film (at least as far as mass audiences are concerned), my reasons for this reaction have nothing, well, mostly nothing, to do with the fact he’s cast established actors in the film or presented a scenario just about anyone over the age of 15 or so can probably relate to. No, my reasons for liking, and I use that word gingerly, the movie have more to do with the kinetic, emotionally schizophrenic vibrations it puts out, the devil-may-care attitudes present crafting an ethereal spell I’m having trouble letting go of.

On the surface the plot is nothing more than another excuse for Korine to indulge in his fascination with adolescent Sapphic excess, diving headfirst into the dirty and the deprived more because he can than because doing so will reveal anything concrete about the human condition or, more importantly, his characters. But when you go deeper, when you let the hip hop electronica vibe of it all take control, when the overlapping dialogue and the dreamlike non-linear crisscrossed visuals download into the brain, it becomes evident the director might in fact have something to say this time around, even if the themes he’s espousing aren’t necessarily the ones the supposed target audience might want to hear.

Three of our heroines, bored college co-ed ingénues Brit (Ashley Benson), Candy (Vanessa Hudgens) and Cotty (Rachel Korine), revel in their own debased debauchery, their overeager enthusiasm to leave their colorless confines to enjoy a Floridian Spring Break holiday leading them down a path overflowing with obliterating landmines. The fourth member of this sprightly quartet, the aptly named girly-girl Faith (Selena Gomez), thinks she wants to be bad and follow in her childhood friends’ footsteps only to discover some fantasies are best left unexplored, learning all too fast growing up quickly and laying waste to the big city isn’t everything she dreamt it would be.

In many ways, Korine’s enterprise is like an electronic music video set to the latest dance tracks only helmed by some weird amalgam of Terrence Malick, Steven Soderbergh and Quentin Tarantino. Scenes repeat themselves, dialogue is uttered in voiceover in hushed, almost whispered tones while the visuals appearing on the screen don’t always match the actions being described by one of the characters. It’s a fevered dreamscape of sex, lies, violence, videotape and cell phones, all of it lit in neon hues so unearthly they could only exist in a rabidly virile candy land as depicted here.

Into this fray comes James Franco, portraying a rapper slash drug dealer slash arms merchant slash all around sleaze aptly named Alien who spies the girls in a courtroom and immediately becomes infatuated with the lot of them. From there, the rabbit hole descends even further into depravity, each girl learning one way or the other that playing fast and loose doesn’t always lead to fame and oftentimes can leave happiness drowning in a pool of its own blood. Franco dominates this second half of the picture, delivering a hyperbolic one-of-a-kind love-it-or-hate-it performance than simply must be seen to be believed. He’s an energetic time bomb slowly ticking towards oblivion, and how the differing ways in which the girls react to this countdown is the moralistic driving force around which everything comes to revolve.

Does it all work? No, not entirely, and I’m not certain all of Korine’s points come through in quite the manner he wants them to. But his decision to cast to Disney darlings (Gomez and Hudgens) and one tween television soap favorite (Benson) is borderline brilliant, while adding Franco to the mix and allowing him to cut lose like he does borders on sublime. The hedonistic mixture is both mind-blowing and mind-numbing, usually both at the very same time, everything coming together to create an expressionistic cocktail of youthful rebellion unlike anything I’ve maybe ever seen. 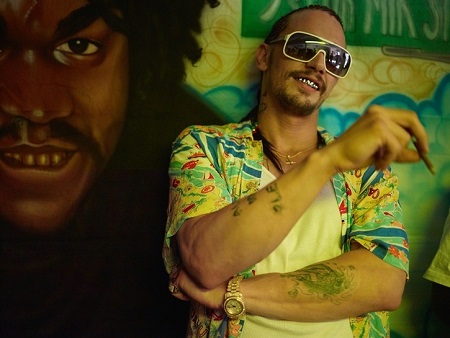 It should be noted that, on a technical front, Korine has outdone himself. Composer Cliff Martinez (Traffic, Drive) and electronic dance musician Skrillex join forces to craft a uniquely compelling score that pulses through the motion picture like robotically modulating heartbeat, while editor Douglas Crise (Arbitrage) keeps the momentum propelling ever forward even when the visuals themselves on the surface appear to run haphazardly in circles. Best of all is Benoît Debie’s (Enter the Void) startling, sometimes awe-inspiring cinematography. His use of light, location, color and shadow is extraordinary, everything bleeding one into the other forcing Faith, Brit, Candy and Cotty to reveal what’s underneath the skin and not just what’s behind those skimpy primary colored bikinis.

I’m still not sure I get why Korine has developed such a passionate fan base and following over the years, and I still think he’s far more interested in shock and awe than he is in putting forth any sort of cohesive vision or point. But in the case of Spring Breakers I think this esthetic works for both him and for the movie he’s directing, allowing his ideas about youth in revolt to come across with far more frank bits of stark honesty than they would have otherwise. Far from perfect, the film still remains unforgettable, and while I’m not going to say this is a Spring Break I’d want to last forever that doesn’t mean I’d want to see my continuing to ponder its mysteries end anytime soon.