From the moment Paramount Pictures and then director J.J. Abrams brought their new iteration of Gene Roddenberry’s Star Trek to the screen in 2009, there has been the thought the building blocks were decidedly in place to craft a motion picture that might equal or surpass Star Trek II: The Wrath of Khan or Star Trek IV: The Voyage Home. Without a doubt, 2013’s disastrous Star Trek Into Darkness, a moribund, unfocused reinterpretation of the Khan Noonien Singh tale, was not it. More, it made some of us question if this reset timeline featuring the classic characters like Captain James T. Kirk, the Vulcan Spock and Dr. Leonard “Bones” McCoy was nothing short of a complete waste of time, and as such the prospect of further adventures of the Starship Enterprise and her crew weren’t nearly as exciting as they otherwise should have been. 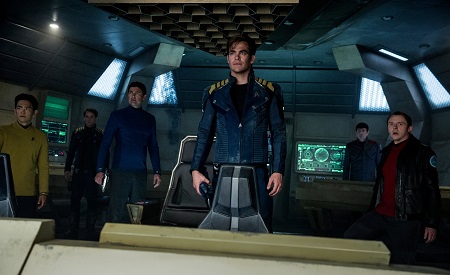 I guess I shouldn’t have been so worried. Star Trek Beyond isn’t just the best of this most recent trilogy, it’s also one of the best films in the entire series, and if it doesn’t quite rank up there with Wrath of Khan or The Voyage Home it certainly deserves to be mentioned in the same breadth of Star Trek VI: The Undiscovered Country. Heck, it might even be better than that original cast finale, writers Simon Pegg (The World’s End) and Doug Jung (Confidence), along with director Justin Lin (Fast & Furious 6) infusing things with a sense of whimsy, togetherness, imagination and most of all fun that’s downright contagious. The team gets back to Roddenberry-like basics, and as such there is a charming, energetically invigorating warmth to this latest interstellar adventure of the U.S.S. Enterprise that held me happily in its soothing embrace for every second of this installment’s two-hour running time.

Just over two-thirds of the way through the five-year mission, Captain Kirk (Chris Pine) and the majority of his deep space Enterprise crew are beginning to feel the strains of living in the depths of deep space for such an extended period of time. After a brief stop at the massive, if remote, Federation outpost of Yorktown, the starship is tasked with aiding the surviving captain of a lost expedition investigating the mysteries lurking inside an adjacent nebula.

What they fly into isn’t the rescue mission they were led to believe, however, a bloodthirsty warmonger calling himself Krall (Idris Elba) laying siege to the Enterprise in pursuit of a device he believes will aid him in bringing the Federation to its knees. After crash landing on a remote planet ruled over with murderous ferocity by this strangely single-minded villain, Kirk, Spock (Zachary Quinto), McCoy (Karl Urban), Lieutenant Uhura (Zoe Saldana), Montgomery “Scotty” Scott (Pegg), Hikaru Sulu (John Cho), Pavel Andreievich Chekov (Anton Yelchin) and the surviving members of the Enterprise are aided by the resourceful Jaylah (Sofia Boutella). She escaped Krall’s prisons years prior, eking out an existence in seclusion waiting for help to arrive. Now, just as she’s ready to leave the planet for good, Kirk and company must ask her for additional assistance, all of them quickly coming to the conclusion that their lives are relatively insignificant when compared to the chaos and destruction that will be unleashed upon the universe if this madman’s plans are allowed to be enacted. 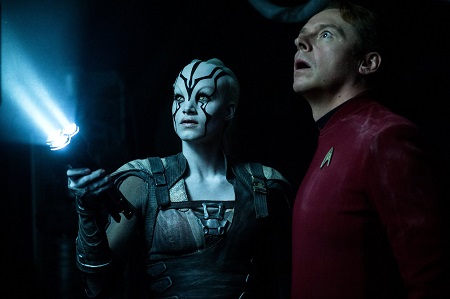 The best thing about Beyond is that it remembers that the core strength of Star Trek is the camaraderie and friendship of the Enterprise’s leadership unit. Kirk, Spock, McCoy, Uhura, Scotty, Sulu and Chekov are a team. No, they’re a family, each relying upon the person standing next to them to come up with ideas and fresh perspectives that could help them all work together to save the proverbial day. These are smart people, ones who are all willing to pay the ultimate sacrifice if it means those they serve with will live to see another dawn. More than that, they know that by working together, by helping one another come up with solutions to whatever problem might be vexing them, a solution can and will be found.

Abrams’ films hinted at developing this dynamic, the first one in particular doing a fine job of putting the building blocks in place for the Enterprise to become what it was in both the fondly remembered 1960’s television series as well as in the first six motion pictures that following it during the ‘80s and ‘90s. But they never delivered on it, Into Darkness for all intents and purposes devolving into a nonsensical action mishmash that did little to build the characters as a unit and everything to make the film somewhat standard and irredeemably stale sci-fi action fare. As perfectly as he cast it, I never got the feeling the director’s heart was entirely where it needed to be, forcing one to wonder why he felt the need to tackle the venerable property in the first place.

Thanks in large part to Pegg and Jung’s resourceful script, while this latest Star Trek rarely breaks any new ground, that doesn’t mean it still cannot help but soar. It gives the characters interesting, highly personal obstacles to overcome while also presenting a solidly fascinating puzzle for the Enterprise’s intrepid crew to work as one to put together. As for Krall, while not a villain for the ages, he’s still got just enough layers to remain a legitimate threat throughout, the revelation as to what is fueling his hatred of the Federation good enough to make him worthy of pity while at the same time not diluting one’s desire to see Kirk hand him walking papers when the time comes. Jaylah is also a terrific addition, her spunky, effervescent enthusiasm increasingly infectious as her story works its way through to its natural, and admittedly somewhat expected, climax. 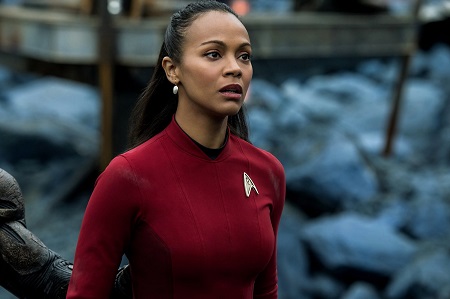 Lin almost can’t help but pull from his Fast & Furious bag of tricks every now and then, and a couple of the action set pieces go on much too long. There’s also a wee bit of over-editing during the more frenetic bits, and I did often wish things would settle down, if only for a passing second or two, so I could catch my breath and make sure I was keeping up with the various twists and turns Pegg and Jung were readying to unveil. As tight as it is, the film could actually be even more streamlined if it truly wanted to be, and I can think of multiple moments where exposition explaining what is going on and why isn’t particularly necessary.

Yet, make no mistake, Star Trek Beyond accelerates to warp speed and never looks back. Lin is more than capable of allowing the cast members room to breathe and evolve, while the actors themselves are all starting to fit into their respective roles as if they have been portraying them for all 50 years of Star Trek history. This is a good movie, possibly even a great one, proving without a shadow of a doubt that Roddenberry’s baby is going to continue to live long and prosper for many happy years to come.