Living in a bleak, barren netherworld residing between past and present, between pleasure and pain, between love and hate, sits director Luca Guadagnino’s (Call Me By Your Name, I Am Love) and screenwriter David Kajganich’s (A Bigger Splash) unrelentingly corrosive reimagining of Dario Argento’s 1977 horror masterwork Suspiria. Not so much a remake as a total reinvention, this is a movie dripping in crippling, almost assaultive atmosphere, detailing the levels of female torment, pain, grief and agony that exist within the confines of a world built on patriarchal artifice and that’s still reeling from the wounds of a war that destroyed virtually everything it came into contact with. This is not a movie interested in delivering comforting niceties to its viewing audience, and as such sitting through all 152 mesmerizing minutes of it without squirming is a practical impossibility. 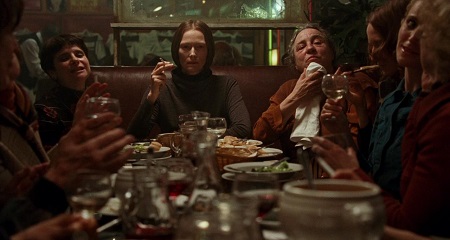 Pretentious? At times. Unfocused? I could see how some are going to think so. Exploitive? Insulting? Deranged? Mawkish? Disgusting? It won’t surprise me a lick if a few viewers walk out of the theatre thinking all of that and so much more. But the simple truth is that Guadagnino’s take on Suspiria is all of those things yet is also the exact opposite of every single one of those descriptive sentiments. It is a movie of opposite extremes, a polarizing descent into madness, art, imagination and self-sacrifice that only grows in power as events progress towards their shockingly carnal conclusion. In short, this is likely the love it-hate it event epic of 2018, and I can’t imagine we’ll see its like again soon at any point in the foreseeable future.

Only the bones resemble Argento’s masterpiece. Both films concern an American ballet student abroad. Both are set within a dance studio that is secretly controlled by witches. But in all honesty that is really where the similarities end. Guadagnino’s effort isn’t as interested in scaring the living daylights out of its audience so much as it is in leaving them in a constant state of unsettling shock, forcing them to ponder a plethora of themes and ideas that are both attractive and repellant in the very same breath. It also wants to analyze the aftereffects of trauma and oppression, especially as it pertains to women, all of which is inherently intriguing.

Whether it answers any questions or offers up new topics for discussion, however, is a different matter entirely. As masterfully composed as all of this mayhem and bloodshed is, there are times where I couldn’t help but wonder if Guadagnino and Kajganich were truly the right two people for this particular job. More specifically, I wondered if they were the right MEN to be undertaking this challenge. There is an observational timidity to the experience of watching their film that’s mildly distracting, and while their scenario is a fascinating one overflowing in topical ideas worth scrutinizing, it’s hard not to imagine what a female director might have made out of all of this if given the opportunity.

Yet, Guadagnino’s film still borders on incredible while also fitting in a box labeled “essential” as far as all 2018 theatrical releases are concerned. It explodes onto the screen with an intimately shocking gracefulness that’s hypnotizing, things having an immaculate devilish fluidity that grows in cantankerous viciousness until the point its rage-filled venom can no longer be contained. But when that moment comes, when this anger is unleashed, it comes from a place of mourning, a place of sacrifice and most of all a place of love, the selfless act of a simple caress or a comforting embrace enough to make the problems of a fractured soul melt away into blissful nothingness with surprising ease. 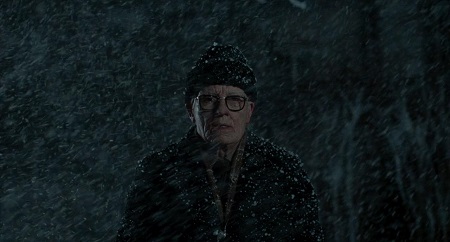 Split into six acts and one epilogue, the plot follows American Susie Bannion (Dakota Johnson), an unknown dance prodigy who has journeyed to Berlin in the winter of 1977 to study with the renowned Helena Markos Dance Company. She makes instant friends with fellow dancer Sara (Mia Goth) while also catching the eye of revered choreographer and instructor Madame Blanc (Tilda Swinton). But the dance company hides a terrifying secret. It is a coven for witches, all of the instructors a devoted disciple of the mysterious and secretive Markos. She claims to be the fabled Mater Suspiriorum, the Mother of Sighs, one of three ancient sorceresses who reportedly leave death and destruction in their wake. In Susie, practically the entire coven believes they have found the perfect human instrument to bring their beloved Mother Markos back to full strength, Madame Blanc the only one who isn’t certain the American dancer is a suitable candidate for the magical procedure they’re all hoping to successfully perform.

There are other narrative strands at work, too, including Sara’s search to find her missing best friend Patricia (Chloë Grace Moretz) and an elongated subplot involving an elderly Jewish psychologist, Dr. Josef Klemperer, who begins to suspect the goings on inside the Helena Markos Dance Company are lethally supernatural. These pieces of the puzzle add additional insights as to what is going on while also planting hints as to where things are likely going to end up at. Kajganich’s script layers these additional pieces in with cunning precision, Sara’s story in particular an emotional whirligig that left me bruised, broken and shattered by the time it came to conclusion.

As magnificent as she is, and she’s pretty stunning, I’m not entirely certain why exactly Swinton is playing three different characters, including Klemperer under layer upon layer of old age makeup and via the pseudonym Lutz Ebersdorf. But this doesn’t make her anything short of spectacular, and there’s a final scene between the actress and Johnson during the epilogue that filled my eyes with so many natural tears I worried for a moment that I wouldn’t have enough tissue to sop them all up. There’s also a magnificent sequence right before all hell literally breaks loose and drowns the dance studio in rivers of blood that I was positively floored by, Swinton giving herself over so completely to the material she practically disappears inside the celluloid never to reemerge. 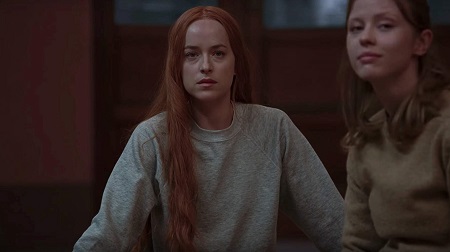 Then there is Johnson. Susie is not an easy character to portray and yet the Fifty Shades of Grey actress is up to the challenge. The dancer’s initial passivity is only a façade, the young woman analyzing all that is happening down to the most benign detail. Johnson couples this with the athletically vile physicality of the dance numbers, tossing herself to and fro with dreadful abandon, bringing the abhorrent darkness lurking at the center of the choreography into the cold light of day with cocksure conviction. It all builds to scenes during the sixth act and in the epilogue that I don’t want to talk about in any detail other than to say the actress is magnificent. Johnson takes command of the character and of the film, her ability to take what was once unseen and ephemeral and suddenly make it visibly concrete extraordinary.

I can’t say I understood all of what Guadagnino and Kajganich were attempting. I also won’t claim that I liked every choice they made for the material, most notably musician Thom Yorke’s adventurous score, which sounds just incredible on its own outside of the film but is disconcerting and ill-fitting when utilized within it. But none of this changes just how monumentally transfixing this new Suspiria ends up being. Guadagnino doesn’t so much improve upon Argento’s original (which isn’t possible) so much as he makes his interpretation exist as its own, ingeniously idiosyncratic entity outside of the original source material. Watching it cast its bloody, violently unhinged spell is a thing of poetical majesty, ultimately making it a viewing experience I’m not soon to forget.