Exhilarating Tangerine a Gender-Bending Odyssey to Self

For a go-for-broke ribald low budget independent comedy revolving around two transgender prostitutes traipsing around the streets of Los Angeles on Christmas Eve, it’s a little surprising just how tender, sensitive and dare I say sweet the heart beating at the center of writer/director Sean Baker’s (Starlet) latest Tangerine ends up being. Shot on the fly using an iPhone 5S, featuring a pair of loose, energetically bouncy performances from newcomers Kitana Kiki Rodriguez and Mya Taylor, the movie is an exuberantly original shot of comedic adrenaline, building to a cathartically touching coda that’s as distinctive as it is genuine. 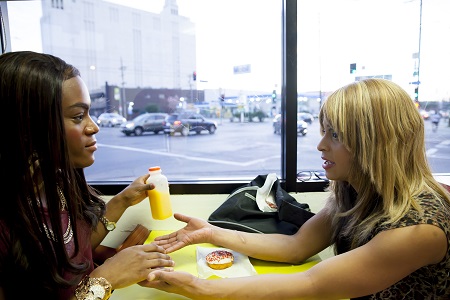 On the morning she gets out of jail, Sin-dee (Rodriguez) meets up with best friend – and fellow streetwalker – Alexandra (Taylor) to catch up over a donut, the latter revealing between bites that the former’s boyfriend Chester (James Ransone), also her pimp, has been cheating on her with a rival, Dinah (Mickey O’Hagan). Furious, Sin-dee sets out to find Dinah to give her a piece of her mind while also eager to figure out where Chester has gone to so she can let him have it. Alexandra, meanwhile, has to get to work, the pair promising to meet up throughout the day in order to chart one another’s progress and recount various adventures.

That’s really it, not much going on as far as broad, all-encompassing narratives are concerned. There are some minor subplots here and there, most notably one revolving around an Armenian cab driver, Razmik (Karren Karagulian), who’s friendly with the two girls, but while the stuff involving him and his various exploits is amusing it’s also not entirely essential. No, this is all about Sin-dee, Alexandra and what they go through on a day-to-day basis, doing their best to stay true to themselves and their respective personal journeys as they also attempt to survive in a dingy, dangerous world that constantly seems to be titled against them.

Baker’s film is so confident, so honest, so gosh darn friendly, of all things, that the tatty seediness of the underlying facets of the subject matter are never as off-putting or as uncomfortable as they potentially could have been. He never belittles his two heroines, never pokes fun at their respective situations. Instead, he celebrates their fearlessness while recognizing with gut-wrenching honesty the lengths they feel as if they must go to in order to be true to themselves and what it is they want out of life. It’s a pretty thin tightrope he’s walking upon yet he does it beautifully, and while there are a handful of slips and balance checks never once did I feel as if the director was going to lose his footing and fall, his film staying spellbindingly aloft first minute to last.

Taylor is divine, achieving a hard-scrabble elegance that belies her quiet, sensitively haunting beauty. There is a depth to her performance that’s not always easy to see yet is just as radiantly continually there, and more often than not I found I couldn’t take my eyes off of her. As for Rodriguez, she’s a fire-breathing, flamboyant force of nature, her sashaying down the streets of L.A. as if it were her personal catwalk as glorious a sight as any I’ll see in all of the 2015. She’s a magnetic agitator bordering on unstoppable, her meet-up with fellow motor-mouth O’Hagan side-splittingly fabulous.

Not a lot ends up happening in Tangerine, yet Baker’s opus, co-written with frequent collaborator Chris Bergoch, manages to manufacture a passionately original ebullience that’s all-encompassing. By embracing Sin-dee and Alexandra for who they are, by never making fun of them, by refusing to see their circumstances as something to be pitied or disparaged, he makes their day-long journey all the more universal, allowing a window into a world most refuse believe exists let alone would normally take the time to see.