“Always believe in yourself. Do this and no matter where you are, you will have nothing to fear.” 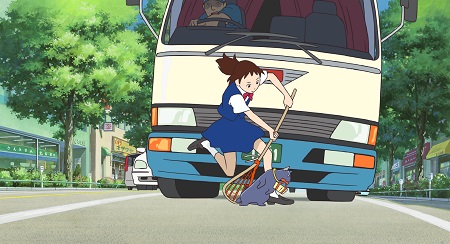 I get why The Cat Returns is considered in some corners as “lesser Studio Ghibli.” The animation isn’t quite up to the exceedingly high standards of the studio’s usual endeavors. It’s in many ways a pseudo sequel to Yoshifumi Kondô’s superb Whisper of the Heart, a very different motion picture in both look and feel that rarely – if ever – ends up in the realm of the fantastical as this one does. It’s frustratingly short, wrapping itself up so quickly some of the more engaging ideas and concepts aren’t given as much room to breathe and grow as is otherwise par for the course for Ghibli productions.

All the same, the movie has amazing heart, and it’s filled with a whole series of engaging and captivating characters who are difficult, if not downright impossible, to become infatuated with to the point of adoration. It wears its weirdness and creative silliness on its sleeve like a badge of honor, while the young schoolgirl, Haru (voiced by Chizuru Ikewaki for the Japanese language release, while Anne Hathaway gives it her endearing all in the English language version), at the center of the tale is an absolute pleasure to be around. It’s lively and energetic in all the ways that matter while also presenting a heartfelt, emotionally complex central scenario around which everything revolves, building to a spellbinding bit of whimsical ingenuity that can’t help but bring a smile to my face just at the very thought of it.

The plot is decidedly on the surreal side, with Haru saving the life of a peculiar cat only to have The Cat King (Tetsurō Tanba / Tim Curry) think he is giving her this amazing gift when he ordains she’ll marry his son Prince Lune (Takayuki Yamada / Andrew Bevis). She ends up in the Kingdom of Cats, making a bushel of new friends during her journey, having to find an inner strength and an unknown amount of confidence if she’s ever going to return to anything close to her normal life. 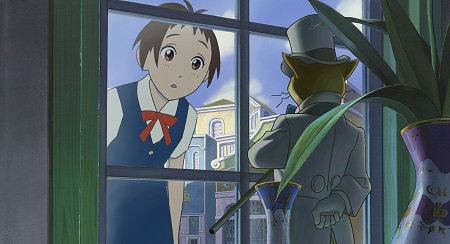 The initial trip inside the Kingdom of Cats is a mesmerizing one, Haru’s attempts to navigate its intricacies sublime. While events accelerate and spiral rather too quickly at times, there’s never a doubt as to what is going and why. More than that, it all build with an intelligent ebullience that’s wonderful, never betraying its characters for a shot of cheap sentiment or kid-friendly sensationalism a lesser motion picture would make a point of wallowing in.

In the end, everything works out pretty much as you expect it to, doing so with a creatively imaginative if not even slightly surprising flourish that’s comfortably heartwarming if not entirely satisfactory. Yet, while this does potentially make The Cat Returns a “lesser” effort for Studio Ghibli, that doesn’t make it bad. In point of fact, it’s downright wonderful, this joyous jaunt an all-ages delight worthy of multiple viewings.

The Making of The Cat Returns

No shocker here, but the feature-length storyboard presentation is once again a highpoint for this Disney release of the Studio Ghibli treasure. Much like their previous efforts for the studio, this is a fascinating way to watch the film, the viewer gaining a whole new insight into the creative process they otherwise never would have been granted. The making-of featurette is also excellent, while the brief interviews with the English-language cast are pretty much exactly what you would expect them to be.

The Cat Returns might not be Studio Ghibli at its absolute best but that still makes it one of the better animated efforts young, old and everyone in-between alike are likely ever to see. Disney’s presentation is stellar, and as such fans are urged to snatch this Blu-ray up the very second it goes on sale.