In the middle of the expansive nothingness of the Nebraska Territories, three frontierswomen – Arabella Sours (Grace Gummer), Theoline Belknap (Miranda Otto) and Gro Svendsen (Sonja Richter) – have gone insane. Not knowing what to do with them it is decided the trio will be sent back east to a waiting Methodist minister and his pious wife (Meryl Streep) in hopes their health can be restored. 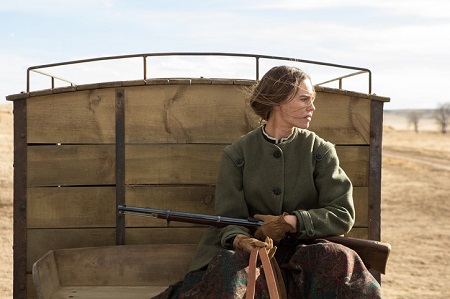 With none of the men stepping up to take on the task, assertive, strong-willed Mary Bee Cuddy (Hilary Swank) has volunteered to do it herself. Realizing the monumental nature of the undertaking, she hires mysterious, bottom-feeding drifter George Briggs (Tommy Lee Jones) to assist her, relying upon him to help make the perilous journey in hopes they will make it to their destination alive.

Based on the award-winning 1988 novel by Glendon Swarthout, Jones’ fourth directorial effort The Homesman makes a wrenching, emotionally shattering companion piece to previous efforts like The Three Burials of Melquiades Estrada and The Sunset Limited. A dour, hardscrabble elegiac Western filled with grit, grime and grotesquerie, it embraces the contradictions inherent to both the tale and to the characters inhabiting it, achieving a level of shattering intimacy that refuses to provide easy answers and leaves the viewer in a state of uncomforting uncertainty that fits the narrative perfectly.

Swathout’s source material showcases the hardships pioneer women faced and the brutish, unforgiving attitudes of the men who fail them, never taking prisoners and refusing to blunt the edges as it presents things in as starkly barren a manner as possible. Jones does not do anything to change this, an almost misogynistic élan smothering things that feels painfully authentic and sadly essential. This is a world were women and their sacrifices are either misunderstood, unappreciated or undervalued, making the journey all of them are being required to make all the more heartbreaking in the process.

The genius, then, is to have made Mary Bee Cuddy the central character around which everything revolves. A headstrong, fiercely intelligent creature she nonetheless masks deep insecurities and wounded bits of pride brought on by the condescending nature of the men she is forced to surround herself with. Determined to make something of her life even though she is entirely on her own, with seemingly no one willing to share their time, let alone their bed, with her, Cuddy has managed to eke out a place in this dusty wilderness most would be proud to call their own.

Swank is incredible, delivering her best performance since her Oscar-winning turn in Million Dollar Baby, crafting a complex, deeply flawed human figure whose emotional and social inadequacies are masked by her intelligent demeanor and can-do attitude. But the journey slowly takes its toll, opening up wounds she’d thought were forever suppressed as she realizes the full extent of the damage done to the three women she’s taken it upon herself to transport and protect. Conversations with Briggs muddy the waters even more, leading to a series of emotionally crippling choices and actions that almost can’t help but end in tragedy. 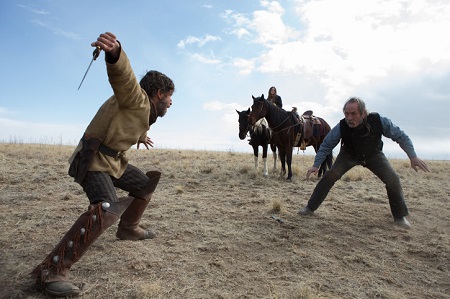 There’s some odd loss of focus from time to time, Jones allowing a seemingly never-ending series of veteran character actors to chew the scenery for a variety of reasons only some of which help propel the film forward. He also plays with chronology a bit too theatrically, flashing back every so often to examine the reasons for each mad woman’s descent into insanity that, while important, oftentimes feel as if they’ve been inelegantly inserted into the motion picture for reasons that are never as clear as they need to be.

At the same time, Jones doesn’t bow to convention, allowing right and wrong, good and evil, to crash one into the other. At one moment Briggs exacts bloody retribution against those he feels have slighted both him and the women he is protecting based on superficial assertions about their class and social standing, at others he allows himself to be belittled and made fun of for the exact same reasons. He’s not a hero, not a villain, nothing more than a flawed man forever making decisions he will have to find a way to live with no matter what the outcome might ultimately prove to be. The Homesman is a great, assertively austere Western that breaks the heart into multiple pieces, leaving the viewer to decide how best to put them back together again all on their lonesome.