The line between corny, kitsch and inspirational is a thin one. It’s very easy for the latter to transform into either of the former, sometimes both at once, lapsing into frustrating melodramatic excess at the drop of a hat. There’s a reason the term “Capra-corn” came into being, after all, It’s a Wonderful Life, Meet John Doe, Mr. Smith Goes to Washington and It Happened One Night director Frank Capra one of the few that could walk that line and do it with an expert form of precision that made him a legend.

In the same breath, what’s inspiring and fuels the imagination for a youngster on the verge of entering their teenage years, thinking of those between 10 and 12, is entirely different than it is for adults, especially film critics. We’re conditioned to be rather cynical animals, narratives revolving almost entirely around the power of positive thinking and traversing in hope above all else not ones that typically float our collective boats. But when we were kids? When we were young? Could we honestly say the same? My guess would be that, for the majority, that answer would undoubtedly be no.

For my part, as a kid I thrilled to Flight of the Navigator, adored The Last Unicorn. I will loudly proclaim the virtues of Ridley Scott’s Legend even though many will talk about it as if it were the director’s biggest failure. While the greatness of fantasy endeavors like Excalibur, Dragonslayer, The Secret of NIMH and Ladyhawke are rarely in dispute, I’ll happily cheer for the likes of Flash Gordon, The Last Starfighter and even Krull on any given day, all of them engaging my intellect and fueling my imagination in ways I continue to hold dear all these years later.

While all of the above might initially appear superfluous as far as my reaction to Brad Bird’s Tomorrowland is concerned, trust me when I say it is not. Co-written with Prometheus and World War Z scribe Damon Lindelof, working from a story the two came up with alongside Jeff Jensen, even with a sprawling, wide-ranging life and death scenario featuring a world on the brink of destruction, what this 130-minute opus ends up being all about is hardly surprising. In the end it is nothing more than a story of hope and love conquering all things evil and nefarious, the power of positive thinking the one thing the Earth needs to put itself back on the right track.

It’s pretty thin stuff, never doing anything more than what’s obvious, building to a climax that’s foregone the moment our heroine, whip-smart teenager Casey Newton (Britt Robertson), figures out what’s going on and why. At the same time, Bird does something here that I find impossible to dismiss and, more than that, even harder to resist. Much like he did with his animated classic The Iron Giant, the filmmaker gets me to try and reconnect with a 12-year-old self I honestly wasn’t sure still existed, reminding me in many ways of the emotions I felt after watching Flight of the Navigator or Flash Gordon for the very first time. 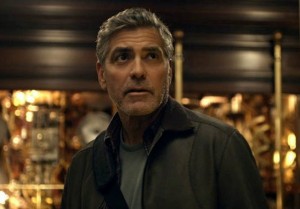 Is it simplistic? Does this childlike, Spielberg-esque look at the world and its ills amount to anything substantive? Are the flaws hiding inside the storytelling masked by Bird’s filmmaking expertise? While the first question offers up a rather obvious affirmative, the pair of no’s involving the latter pair of questions isn’t quite as cut and dried. I can’t disagree with either statement, the script rather sophomoric as far as its themes and its ideas are concerned. Yet the film still taps into a sense of wonderment, a feeling of awe, that I found compelling, and even with all the rambling excess there wasn’t a single second where I felt bored or upset by anything taking place up there on the screen.

The plot is an ecological fable revolving around Casey coming into contact with a bizarre lapel pin, which allows her to see visions of a futuristic city where science, exploration, art, creation, togetherness and community are treasured above everything else. Determined to find this place, she’s led by a mysterious British child, Athena (Raffey Cassidy), to the doorstep of reclusive genius Frank Walker (George Clooney), an inventor with intimate insight into this fantastical city as well as potentially the means to go there.

The threat hiding inside of all of this concerns the actual end of the world, a seemingly never-ending horde of smiley-happy murderous robots and a downtrodden scientist, Nix (Hugh Laurie), who seems more than content to let the Earth die than attempt to come up with a solution to solve the problems fueling its destruction. Climate Change, religious fanaticism, nuclear proliferation, all of this and more help turn the dial towards crisis, and as far as Athena and Frank can surmise it’s only a problem solver like Casey who can stave off Armageddon.

Michael Giacchino’s (Up, The Incredibles) score hits all the requisite John Williams-like grace notes, while Claudio Miranda’s (Life of Pi) incandescent, sumptuously glossy cinematography achieves a 1980s-like luminescence that fits events perfectly. Bird is in control no matter how disjointed or nonsensical the script might become, his passion allowing for the film to achieve a starry-eyed eloquence that’s sublime. If anything, the director has managed to make an ‘80s-style Disney fantasy traversing in many of the same ideas and concerns Christopher Nolan’s Interstellar did just last year, only doing so in a way that’s more kid-friendly than that sci-fi epic proved to be.

I’m not sure how Tomorrowland will age. I have no idea if the 10-year-olds, the 12-year-olds of today will connect and become lost within its imaginative embraces the same way I did when I first viewed Flight of the Navigator or The Last Starfighter when they were first released and I was just beginning to realize the power cinema had upon a captivated audience. What I do know is that Bird’s effort, for all its frustrating faults and creatively inspired ambitions, brought that child back out of me as I sat there watching it, and for that reason, and maybe that reason alone, I’m excited to find out what the target audience ends up thinking a decade or so down the line.