On September 9, 2004 CBS News aired a story on “60 Minutes II” that President George W. Bush, currently running against Senator John Kerry for a second term, did not do his duty in the Texas Air National Guard during the Vietnam War. The story was produced by Mary Mapes (Cate Blanchett), who broke the Abu Ghraib prison scandal and was held in high regard by her compatriots and peers, and was reported by veteran Dan Rather (Robert Redford), an industry icon who had been on-air at CBS for over 40 years. The broadcast was a huge success for the network and for those who researched it, nailing down a story many journalists had been circling around and trying to confirm since G. W. Bush’s initial run for the Presidency back in 2000. 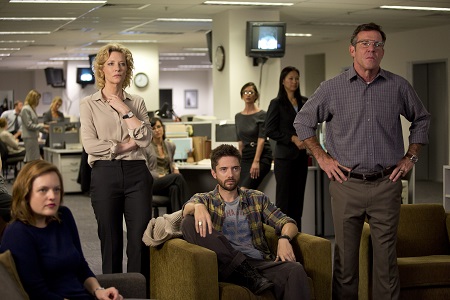 Then the unthinkable happened. The key component of the story, a series of official military papers nicknamed “The Killian Documents” after Lt. Col. Jerry B. Killian, the deceased former commanding officer of the 111th Fighter Intercept Squadron in which the President served, were not obtained as originally stated. Turns out, former Texas Army National Guard lieutenant colonel Bill Burkett (Stacey Keach) received these copies from an unnamed whistleblower, his convoluted tale as to how they came to him different than what he stated to Mapes months prior. Next thing the reporters know they’re the ones under the microscope, CBS News president Andrew Heyward (Bruce Greenwood) forcing Rather to apologize for the story on-air while also convening an independent investigative panel to figure out what went wrong with the story and why.

It’s hard to know exactly where to stand as far as Truth is concerned. Adapted by writer/director James Vanderbilt (Zodiac) from Mary Mapes’ best-selling memoir Truth and Duty: The Press, the President, and the Privilege of Power, the basic thesis that the movie puts forth, that a story was deconstructed not because it was wrong but because it wasn’t vetted as thoroughly as it should have been, that corporate interests trumped journalist ones, that the Forth Estate was left out in the cold to fend for itself, is hard to disagree with. But it’s just as reasonable to state that Mapes and her team did make a huge mistake, that in their push to get the story out there (that urgency, it should also be noted, was also fueled by corporate interests) they did not confirm their sources like they should have. They screwed up, and even if the core of what they’re saying was correct there was so much doubt as to the validity of the supposed ‘proof’ truth seem like a lie and fact suddenly had the appearance of fiction, a thing supporters of G.W. Bush jumped on moments after the broadcast first aired.

I get it. Mapes, Rather and the rest were unjustly pilloried and smeared. Same time, they did make mistakes and they didn’t get everything right. As such, they do deserve to take some accountability for what happened. Had they dotted the I’s and crossed the T’s the story would have stayed on Bush’s National Guard tenure and not faded into obscurity thanks to arguments about typefaces, superscripts and text margins. Vanderbilt is more concerned with exonerating Mapes and her team than he is in engaging in a discussion as to the rights, wrongs and the multifarious in-betweens this story brought out into the light, as such ‘truth’ seems to be the last thing on his film’s mind.

Yet Blanchett is glorious, giving another sensational performance ranking up there with some of the best of her Oscar-winning career. There is a complexity to her depiction of Mapes, the actress mining territories and going places Vanderbilt’s script barely only hints at let alone chooses to examine in exacting detail. Her reactions to Burkett’s duplicity, the way her story is twisted into insignificance, how she is attacked for doing her job as if she was some hack with an axe to grand and not a journalist who’s proven herself on stories running the liberal/conservative spectrum, Blanchett balances all of this with magnificent refinement.

Most of all, though, the film solidifies the friendship between Mapes and Rather with delicate perspicacity. The way they communicate one to the other so often with a glance and without the need for words, it’s all rather wonderful. There’s a great scene, one that’s sadly been utilized far too much in promos for the motion picture, of the two of them talking together one late night after the story has blown up in their faces and CBS has decided to wash their hands of it. Not only are Blanchett and Redford superb, the scene goes for a complex dexterity in regards to the overarching themes, adding a maturity to the proceedings I felt was sadly lacking the majority of the time. 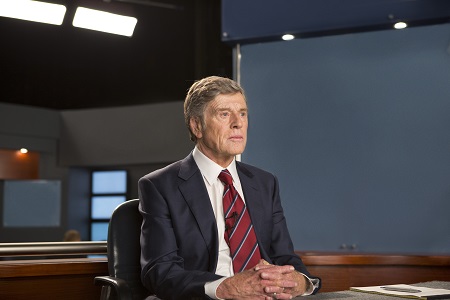 I don’t disagree with what Vanderbilt wants to say. His points about the corporatization of network news, the reticence on the part of national media outlets to push things too far so as not to displease stockholders and put in jeopardy the bottom line, that all comes through loud and clear. As valid and as potent as this observation might be, it is also far from a new. Vanderbilt turns the volume up to 11 yet doesn’t say much that’s revelatory, a facet made even more annoying now that we’re in the middle of a new presidential contest and deserve to hear arguments far more nuanced than this.

Vanderbilt seems so willing to give the reporters a pass for not digging as deeply as they should have that any discussion that mistakes were made is so quickly glossed over it’s almost a wonder it’s even dealt with at all. Journalism isn’t above its own sort of reproach when stories are not vetted as they should be, and even if the core is correct and the conclusions are factual few are going to care if they can pick apart the puzzle pieces that supposedly lead there. Truth, as much as I agree with many of its contentions, fails to hold itself to the same level of scrutiny as it does those going after Mapes and Rather, and as such never feels as authentic as it should have.