Truth or Dare an Irredeemable Game of Horror Nonsense

While in Mexico celebrating Spring Break, best friends and roommates Olivia (Lucy Hale) and Markie (Violett Beane), along with the rest of their friend group Lucas (Tyler Posey), Brad (Hayden Szeto), Penelope (Sophia Taylor Ali) and Tyson (Nolan Gerard Funk), are persuaded to play an impromptu late night game of drunken Truth or Dare with sexy fellow American Carter (Landon Liboiron). They are joined by obnoxious misogynist Ronnie (Sam Lerner), all of them long past the point of thinking how strange it is some stranger they’d just met would want to play a high school drinking game in the middle of nowhere inside the ruins of a dilapidated Spanish mission. 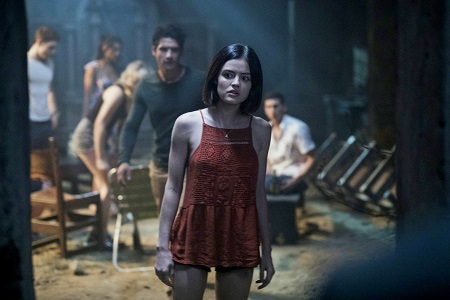 Apparently they should have. Once they get back to school, it turns out some demonic force keen on them to keep playing the game. When asked, “Truth or dare?” by anyone, at any time, they must make an immediate choice. They must answer every “truth” honestly, no matter how personally damaging or ruinous do so might be. They must complete each “dare” no matter how crazy or potentially lethal it could become. Fail to do either? Then they die. Horribly, and preferably in front of as many witnesses as possible. It’s a horrifying situation, and as their circle of friends grows smaller and smaller after each round of the game, Olivia is increasingly determined to find Carter and discover what is going on and how to stop it before it’s too late to save herself, Markie and anyone else who happens to still be breathing.

That synopsis is far more interesting than the actual reality of watching Truth or Dare proves to be. Wasting a somewhat decent idea and squandering any sort of potential this supernatural mishmash of Final Destination, Jumanji and It Follows might have had, director Jeff Wadlow (Kick-Ass 2, Cry_Wolf) and his trio of fellow screenwriters instead have come up with an absolutely worthless piece of horror idiocy that grows increasingly tiresome as it goes along. Other than a couple of amusing deaths, one of which has its shocking impact severely dampened thanks to the film’s PG-13 rating, there’s just nothing here to hold even the most obsessive genre fanatic’s attention for anything longer than a handful of minutes. This movie is a waste of time, and there’s little more to add as that statement speaks for itself.

It doesn’t help that Olivia is one of the worst “best friends” in recent horror history. It feels like every five minutes she’s worrying about Markie finding out one terrible thing after another. For two young women who have supposedly spent their lives sharing secrets since childhood Olivia has somehow managed to stockpile a heck of a lot of skeletons in her closet she’d rather her beloved BFF would never unearth. It almost becomes a running gag, and each time she started going crazy Markie would find out something dreadful I couldn’t help but start giggling under my breath at the sheer inanity of it all.

Granted, stupidity almost becomes this film’s chief asset. There’s a stupendous sequence where one member of the friend group is dared to walk outside along a neighborhood house’s rooftop while drinking an entire bottle of vodka, Olivia and two others scurrying about down below thinking they’ll be able to catch her if she were to fall utilizing a ratty futon mattress. It’s not that this set piece is terrific because it’s so well thought out or overflowing in well-constructed suspense. No. Just the opposite. It’s amazing for just how unintentionally hilarious it ends up proving to be, and for a good five minutes or so I was positively delighted by all the lunacy and nonsense that was being thrown upon the screen for me to enjoy.

But other than that I can’t say much here made a positive impression upon me. I do appreciate that the film calls itself out for its own shoddy CGI (there’s a pretty good Snapchat joke), and the pre-credits stinger of a young woman forced to do whatever the game asks of her is suitably unsettling. It’s the rest of the movie that’s something of an irredeemably baffling genre disaster, Truth or Dare one supernatural game of horror nonsense I’d honestly rather not have played.