“This house needs a family.” 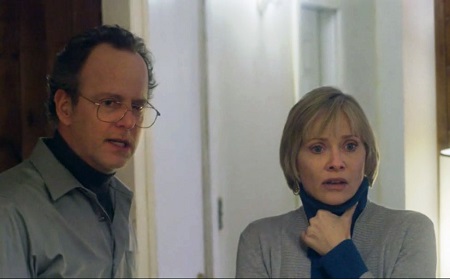 “Anne (Barbara Crampton) and Paul Sacchetti (Andrew Sensenig) have come to the small secluded New England township of Aylesbury to get away from the city and the memories of their dearly departed college-aged son Bobby. When things get a little odd, Anne becomes convinced their son’s spirit is inside the house, so certain she asks friends – and paranormal psychiatrists – May (Lisa Marie) and Jacob Lewis (Larry Fessenden) to come and visit. They in turn invite their own son Harry (Michael Patrick), Bobby’s former roommate, and his current girlfriend Daniella (Kelsea Dakota) to join them, May positive the energy they’ll supply will help ascertain the intentions of the spirit residing in the house with the Sacchettis.

We Are Still Here is terrifically unsettling, moving at a brisk clip and building to a suitably blood-soaked conclusion filled with uncomforting delights. Writer/director Ted Geoghegan, working from a concept conceived by Richard Griffin, has delivered a sensational horror treat, this B-grade shocker crafting tension slowly but surely before unleashing a smorgasbord of mayhem and violence that’s extraordinary. Along with It Follows, this is one of the best genre efforts of the year, and fans of this kind of thing owe it to themselves to give it a look at their earliest possible convenience. 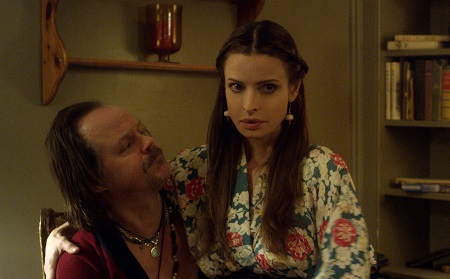 And that’s key. The secret to the film’s success is that it remains true to a line of dialogue Dave utters more than a couple of times throughout, the nuances found within crucial as to what will transpire and why. It also allows for a final scene that’s oddly heartbreaking and, in some strange, surreal way kind of way, uplifting, a fade to black focused on Sensenig beautiful in its own, disquieting way. We Are Still Here is just great filmmaking, plain and simple, and as horror gems go this is one house I can’t wait to revisit again.”

We Are Still Here is terrific. Freakishly well made, filled with a number of signature moments, director Ted Geoghegan’s film is both delectable homage to past horror greats as well as a new genre entry that delightfully stands on its own merits. I love this movie. Watch it at once. 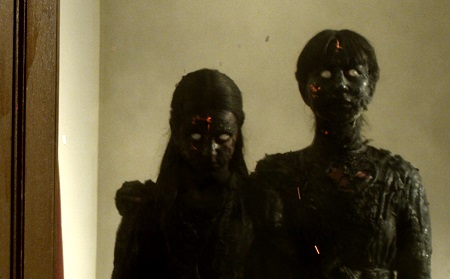 Audio Commentary with writer/director Ted Geoghegan and producer Travis Stevens – Superb commentary track with Geoghegan offering a number of colorful insights into the film’s production, especially as it concerns the town the house was located in as well as the story’s ties to Lucio Fulci’s The House by the Cemetery. Best of all might be a brief discussion about how many ways one can look at the film’s borderline classic climactic image.

Behind the Scenes (7:04) – Fairly common making-of featurette, Geoghegan and Stevens repeating a great deal of the information they discuss in far greater detail inside the audio commentary.

I would actually urge one to skip watching the trailer for this one until after they’ve viewed We Are Still Here for themselves. Additionally, make sure you take a look at the fantastically creepy (and informative!) end credits, they’re terrifically inspired. As for the movie itself, it’s just wonderful, MPI Media Group’s Blu-ray presentation just about perfect and a truly delectable – if suitably gruesome – treat for fans.