Six crazy tales of happenstance, revenge, retribution and catharsis that are as bleak and as dark as they are imaginative, surprising and, in a very odd way, kind of inspiring. In other words, you’ve never seen anything quite like it.

“A group of individuals, including a beautiful woman (María Marull), a talkative busybody (Dario Grandinetti) and a learned professor (Mónica Villa), find themselves on a plane filled with strangers all of whom have far more in common than they initially know. A lovely waitress (Rita Cortese) comes face-to-face with the mobster (Julieta Zylberberg) who helped ruin her life even though he doesn’t know he’s responsible. Two men (Leonardo Sbaraglia, Walter Donado) meet on a desolate highway and let their anger get the better of them. A demolition expert (Ricardo Darin) takes issue with a parking ticket and the subsequent towing of his car. An influential businessman (Oscar Martínez) colludes with a shady lawyer (Osmar Núñez) to keep his son out of prison only to discover doing so might be more trouble than it’s worth. On her wedding day, a newlywed wife (Érica Rivas) discovers her new husband (Diego Gentile) has been keeping secrets that jeopardize their chances of future happiness together.

These are the six tales showcased in writer/director Damián Szifron’s gleefully energetic, dazzlingly anarchic Argentinian anthology Wild Tales. A Best Foreign Language Film Oscar nominee, this deliriously entertaining, confidently composed satire of cultural, gender and class politics and mores is astonishing, deftly moving from one story to the next with freewheeling enthusiasm. While each segment is unconnected from those surrounding it, they all manage to convey common themes eviscerating the status quo, showing while catharsis and vengeance can go hand-in-hand, the price extracted for revenge is almost always worse than the cost of turning the other cheek.

Think of the film like a ribald, no-holds-barred homage to the anachronistic works of Pedro Almodóvar (who produces), Quentin Tarantino and the Roger Corman-directed, Vincent Price-starring Edgar Allan Poe-based anthology films of the 1960s. It’s a lovingly nasty bit of mockery, unafraid to shed blood or blow things up while just as equally willing to dive into the heart of melodramatically emotional excess. Szifron is in control every step of the way, nothing happening that he doesn’t intend, each little vignette resonating with the impact of a Road Runner cartoon crossed with a Mad Magazine parody infused with the intelligence and insight of a Paddy Chayefsky satire.

All six shorts border on genius, but, for me at least, three stand clearly above the rest. Exhibit A is the opening pre-credits segment featuring a planeload of passengers who end up knowing more about one another than they initially realize. It starts with a cute, borderline saccharine buoyancy, initially tricking one into thinking they’re about to see some dimwitted, if still pleasingly clever, romantic trifle and not a coal black comedy of revenge and liberation. But then things explode into chaos, spinning on a dime in ways that are impossible to see coming, building to a climactic moment that catapulted me to the edge of my seat in rapt, dumbfounded jubilation. 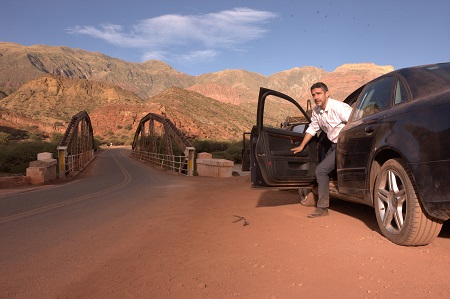 I also loved the road rage evisceration The Strongest, otherwise known as part three of this sextet, the two warring parties careening far out of control yet doing so in a way that still feels oddly believable and unforced no matter how far out on a very extreme ledge things ultimately end up on. But the belle of the ball is the climactic chapter entitled To Death Do Us Part, and the less you know about this particular wedding party before watching the better. Safe to say, even knowing what’s happened in the previous five shorts, nothing prepared me for where this was headed, all of it anchored by a performance from the devastatingly beautiful Rivas that is as magnetic as it is complex.

It’s safe to say 2014 was a terrific year for foreign language imports. Of the five films that battled it out for Oscar glory, the four I saw – this, Russia’s Leviathan, Mauritania’s Timbuktu and Poland’s Ida (which won) – all were magnificent, each arguably deserving of the Academy Award. Without a doubt, Wild Tales was the most bizarre, the least typical of the group, riding along in its own idiosyncratic way and not caring a bit if some viewers were put off by that fact. Make no mistake, however, this cements Szifron as a major directorial talent, his anthology epic a beautifully disturbing calling card sure to be debated and discussed for years to come.”

Wild Tales is a stunner, a joyfully anarchic piece of cinematic chaos that just gets better and better with each viewing. Watch it at once.

Wild Shooting: Creating the Film (24:58) – Superb, if all too brief, featurette chronicling the film’s creation.

Of the five films nominated for last year’s Best Foreign Language Film Academy Award Wild Tales has slowly but surely become my favorite of the bunch. Sony’s Blu-ray presentation is superb, and interested viewers are urged to pick this disc up as soon as they can.