On the eve of her 18th birthday, Clare Shannon’s (Joey King) dumpster-diving scrounger of a father Jonathan (Ryan Phillippe) gives his high school outcast daughter a gorgeous Chinese music box that’s in surprisingly excellent condition considering where he found it. Fooling around, she is able to piece together a few of the Chinese characters, deciphering that the box promises seven wishes to its owner. With her life in something of a shambles and in a fit of angry desperation, Clare figures she’ll give it a shot, and while her ask is unquestionably selfish in nature, as this is all fantasy it’s not like anything she requests will ever come to pass. 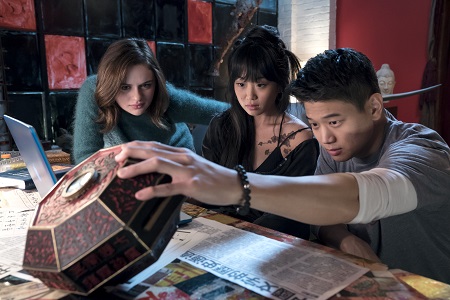 But the unthinkable does happen. Clare’s wish is answered, and suddenly the girl who was at the bottom of the teenage social totem pole, and much to the amazement of best friends June (Shannon Purser) and Meredith (Sydney Park), is on her way to being the most popular girl in school. But these requests come with a staggering price tag, and with the help of classmate Ryan (Ki Hong Lee) the youngster begins to realize just how terrifying the power residing within the music box truly is. With her eternal soul at stake, Clare must figure out a way to right the wrongs her wishes have wrought, knowing that if she is unable to do so she’ll join her dearly departed mother Johanna (Elisabeth Rohm), who committed suicide while she was still a child, in a tragically early grave.

Wish Upon has a killer ending. Barbara Marshall’s (Viral) screenplay doesn’t pull any punches as things catapult their way to a climax, justifiably taking Clare to task for her actions while also refusing to ask the audience to forgive any of her more shallow or self-centered decisions. It’s very reminiscent of Sam Raimi’s more down and dirty horror opuses, the “Twilight Zone” mechanics of it all delivering on its admittedly unoriginal themes of being careful of what wishes for because they’ll very likely end up getting it rather nicely.

If only the movie as a whole lived up to its ending. Make no mistake, Wish Upon is a pretty bad horror yarn, filled with characters who are almost impossible to care about and plot progressions that are too silly to be believed. While some of Marshall’s dialogue is sharply delivered, having a Mean Girls meets The Edge of Seventeen vitality that’s impressive, none of that matters as far as the bigger picture is concerned. Clare’s actions, especially once she realizes what the box is capable of, are inexcusable, while the reactions of her friends June and Meredith to their BFF’s out of nowhere largess is equally abhorrent.

As a treatise analyzing the selfishness of youth, I fully get what the film hopes to achieve. But if we’re not given a reason to care, if all of the emotions pushing characters to do what they do is born from maudlin melodramatic excess and nothing authentic, the chances these ideas are going to resonate in any manner whatsoever is perilously slim. The narrative is stripped to its barest minimum in every way, each character a one-dimensional cipher whose only reason to exist is to either wag their finger in Clare’s direction, laugh at her stupidity or die in some Final Destination Rube Goldberg-like manner that’s as preposterous as it is asinine. 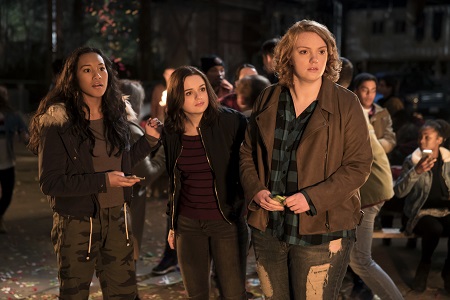 Veteran cinematographer John R. Leonetti, known for crafting subtly creepy visuals for features like The Conjuring and Insidious, steps into the director’s chair for the first time since 2014’s Annabelle, and while things look terrific, it also never feels like he cares about anything that’s happening story-wise until the very end. Other than King and Lee, both of whom do a fine job of making the most of the material as best they can, few members of the cast are given any room to breathe, and as such they all do a poor job of making an impression. Phillippe is particularly left out to dry, almost as if Leonetti was in a rush to get him off the set, the former heartthrob so laughingly awful one hopes he was paid well enough to make the embarrassment of being a part of this debacle worthwhile.

I do like the last scene. It’s quick, cutthroat and, considering the relative timidity of the horror throughout the majority of the picture, suitably shocking. It’s the other 95-percent that isn’t good, the film a silly genre mishmash of ideas, concepts and themes that never coalesce into anything that feels original or fresh. Filled with unlikable characters, most of whom are deserving of their bloody just deserts, Wish Upon is hard to sit through, and if I had a wish of my own to toss its way it likely would be the desire that it not have been made in the first place.