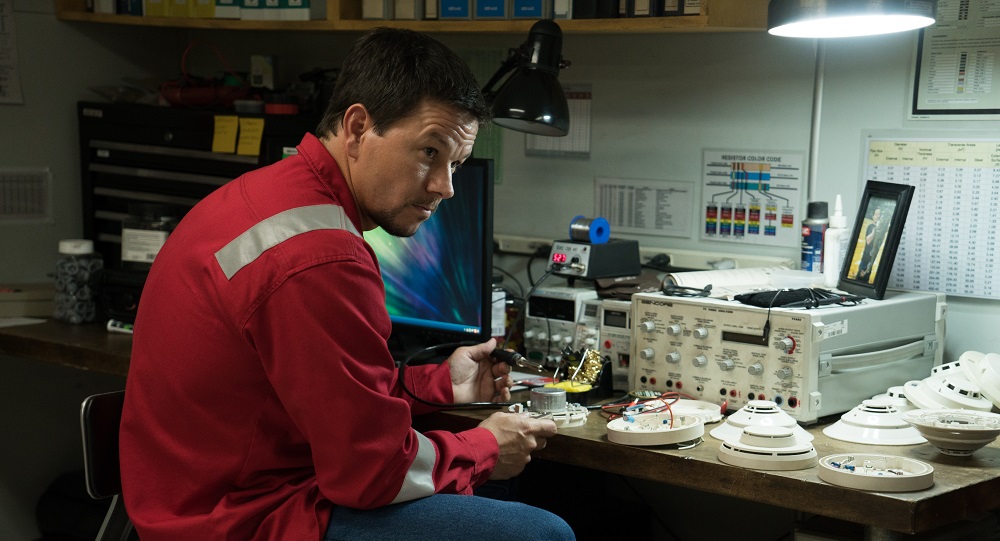 A thrilling recreation of an event that’s still fresh in the public mind, Deepwater Horizon is a superbly staged action-drama that uses the tragedy of that April 2010 event as a springboard to tell a story about the triumph of the human spirit and selfless courage under the most unimaginable of circumstances. Much like Clint Eastwood’s Sully, director Peter Berg’s (Friday Night Lights, The Kingdom) latest effort showcases a singularity of focus, intent on showcasing the central event itself and little else. It analyzes the moments before the catastrophe and lingers on the hours after the rescue, presenting both aspects as bookends to a saga of trauma and fire that shows just how far a person is willing to go to see that others might live to see another dawn. 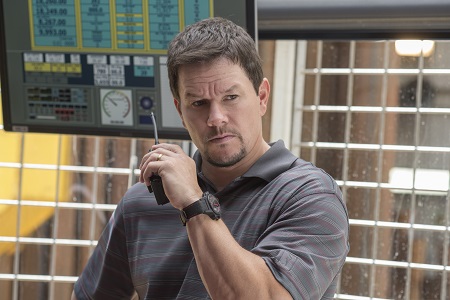 The story centers on family man Mike Williams (Mark Wahlberg), a Transocean chief electronics technician who works aboard the Deepwater Horizon in the Gulf of Mexico and reports directly to offshore installation manager Jim “Mr. Jimmy” Harrell (Kurt Russell). He’s the one the script focuses the majority of its attentions on, utilizing him as the hardscrabble everyman audiences should hopefully be able to relate to. As such, when the station’s blowout preventer malfunctions and things literally begin to explode, Mike is the guy Berg and his writers choose to run alongside, the story shifting between his attempts at survival on the oil rig and his deathly worried wife Felicia (Kate Hudson) back at home for the majority of its volatile midsection.

There’s not a lot more to say. Matthew Michael Carnahan (World War Z) and Matthew Sand’s (Ninja Assassin) script, based on the New York Times article by David Barstow, David Rohde and Stephanie Saul, is brutally efficient, cutting to the chase with a fair amount of speed after it places all its various pieces upon the chessboard. It does a fine job setting up the various characters at the heart of things, most notably Williams, Mr. Jimmy and Deputy Dynamic Positioning Officer – essentially the rig’s pilot, responsible for maintaining the floating rig’s position directly over the well using propellers and thrusters – Andrea Fleytas (Gina Rodriguez), while also explaining the reasons behind the blowout preventer’s malfunction in a way even the layest laymen should be able to comprehend.

What it does not do is offer up a lot in the way of nuance or subtly. The script presents the British Petroleum (BP) executives, most notably site manager Donald Vidrine (John Malkovich), as mustache-twirling company men whose hunger for profits leaves them blind to the inherent dangers of deep sea oil drilling. They are, to the one, ignorant idiots, so one dimensional they barely exist, turning out to be nothing more than mud-covered nincompoops when things finally begin to fall apart and the men of the Deepwater Horizon are looking for someone to blame. Also, much like Sully, the frequent sojourns back to Williams’ frantic wife Felicia are tiresome, and as good as Hudson is in the role, and she’s excellent, every time her character appears things grind to a sudden, saccharine stop that dilutes the inherent intense emotional electricity the story on the rig effortlessly is able to generate. 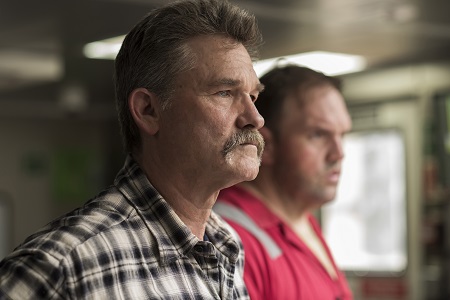 Even so, the movie makes a lot of solid points in regards to BP’s negligence in this tragedy, not exactly glossing over the fact it was there callous cavalier pursuit of profits above safety that helped lead the Deepwater Horizon to its doom. As for Berg, he once again shows that he can handle stories like this one with effortless virtuosity, and while this story doesn’t display the same sort of depth as his last collaboration with Wahlberg, the Afghan War survival thriller Lone Survivor, his skill generating tension and suspense hasn’t diminished one single bit.

Ultimately, Deepwater Horizon, as terrific as Wahlberg, Russell and Rodriguez all might be, is more a technical marvel than it is anything else, the film’s sound design, special effects, editing, production design and cinematography top notch across the board. Steve Jablonsky’s (Keanu) combatively effective score is also worthy of mention, the veteran composer’s themes helping augment the growing situational terror of the experience of being on the oil rig just about perfectly. While not a great movie, this is still a mightily entertaining one, and if audiences think a little bit more about how corporations callously treat the planet as their own personal playground to exploit and make money off of, then that’s pretty good, too. 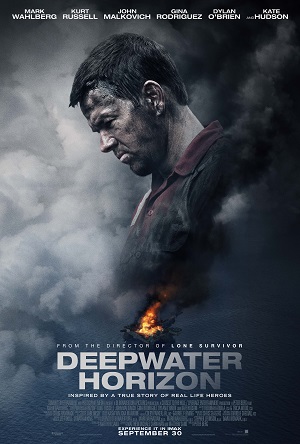