Cisco (Jorge Lendeborg, Jr.) is a year away from graduating from a Cleveland trade school. He’s not particularly excited about that, the young man more interested in becoming a competitive skateboarder alongside friends Junior (Moises Arias), Patty Cake (Rafi Gavron) and Boobie (Ezri Walker). Without the means to pay for the entry fees to these events, the quartet boost cars to come up with the cash, keeping things as simple and as safe as they can considering the danger of arrest and incarceration inherent to what it is that they are doing. 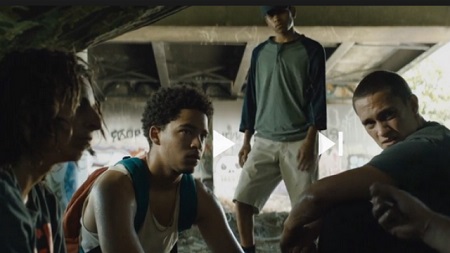 Things change the moment they run across a vehicle with a giant stash of “molly” hidden in the trunk. Seeing this as their way to make enough money to participate in events that could make careers as professional skateboards a real possibility, Cisco urges his crew to understand that selling these drugs is the best course of action available to them. But in doing so, the draw the ire of local drug kingpin and food truck maven Momma (Linda Emond), and she doesn’t take lightly anyone, not even a group of entrepreneurial kids, moving in on her territory uninvited.

There is precious little original as it pertains to writer/director Steven Caple, Jr.’s Sundance Film Festival favorite The Land. His feature-length narrative debut, the scenario at play is hardly revelatory, and for the most part there are precious few surprises to be found as Cisco and company attempt to extricate themselves from their potentially catastrophic situation. But the movie is visually dynamic, moves with electric urgency and treats all four of its young protagonists with intelligence and respect. More than that, Caple offers up a conclusion that satisfactorily strays extremely far from the status quo, giving things an aura of originality all other facets of the narrative and the scenario undeniably lack.

It also helps that the supporting players are, to a one, incredible. Michael K. Williams is positively brilliant in his few scenes as a struggling, if still caring, father who understands more about what it is these kids are going through than he can easily say. Equaling him is Erykah Badu, delivering a raw, unvarnished portrait of regret and resilience as a neighborhood prostitute romancing Cisco’s main father figure Uncle Steve, played with passionately understated ferocity by the great Kim Coates. Best of all is Emond, transforming Mamma from a one-dimensional cliché into a complex creature of menace, motherly concern and lethal vindictiveness. She’s asked to do a lot of the emotional heavy lifting mainly because she is the one these kids have to figure out how to deal with or else their lives will be over before they have even barely begun, the Tony-nominated veteran of the stage and screen capturing my attention every time she wandered into the frame.

Additionally, the film is stunningly shot by relative newcomer Steven Holleran, the cinematographer doing a glorious job creating an inner city dreamscape that feels oftentimes like some glorious combination of a Terrence Malick drama and a Steve James documentary. Holleran and Caple paint Cleveland in ways that are imaginative and unusual, allowing the streets Cisco and company navigate to come alive as if they were the sixth member of youngsters’ crew. Combined with Saira Haider’s electrifying editing there’s just something special about the picture I likely couldn’t have resisted had I tried, and there was nary a point during the film’s rapid-fire 104 minutes where I found myself wanting to.

There are some melodramatic moments, especially as they pertain to a couple members of Cisco’s cadre of friends. It also doesn’t help that the lack of originality as it pertains to the central narrative is continually noticeable, and as lived-in, honest and alive as the movie might be the lack of surprises, save for how Caple wraps things up, is a constant annoyance, the feeling that I’d seen a number of these beats before (most recently in last year’s somewhat similar Dope) difficult to shake.

But overall I liked The Land a great deal. Not only do the young actors show they have talent worthy of keeping a keen eye on, the supporting players turn in performances worth of end-of-year accolades. More than that, though, Caple is a visual wunderkind with a keen eye for detail and a mesmerizing ability to make even the most tired of stories feel as if they were something close to brand new. His movie has an exigency to it that is irrefutably gripping, and personally I cannot wait to see what this talented filmmaker has up his sleeve next. 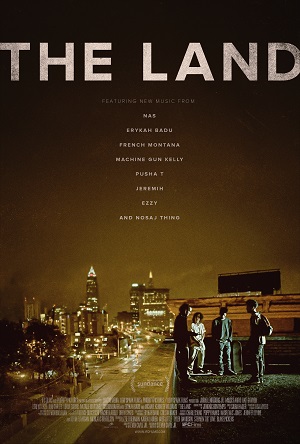