Sacha (voiced by Chloé Dunn) is the 15-year-old aristocratic granddaughter of famed Saint Petersburg explorer Oloukine (Geoffrey Greenhill). On his last expedition, an attempt to reach the North Pole, he, his crew and his specially designed ship the Davai mysteriously vanished, search and rescue missions all coming up empty. But with her parents about to push her into an arranged marriage against her will, Sacha is all but certain she’s discovered her grandfather’s secret route into the heart of the Arctic, certain if someone, anyone, would give her a chance she’ll be able to lead a crew to Oloukine and the remains of the Davai.

No one believes her, of course, so the strong-willed Russian does the only thing she feels she can, and that’s run away to the coast and attempt to hire a ship all on her own. After overcoming a handful of unexpected obstacles, not the least of which is being waylaid at a local inn and forced to work as a maid and server for a month in order to secure room and board, Sacha ultimately is able to convince grizzled veteran of the sea Captain Lund (Peter Hudson) her plan has merit. Although his crew, most notably his selfish little brother Larson (Anthony Hickling), aren’t all in agreement that this expedition is a good idea, Lund feels compelled to follow in the footsteps of the Davai, gambling this teenage girl knows what she is talking about and her plan is a good one.

Simple, delicately straightforward and refreshingly honest, French animated import Long Way North is a courageously emotional piece of imaginative art that held me spellbound for every second of its 81 minutes. Set at the tail end of the 19th century, this saga of resilience, belief, friendship and family is extraordinary, all of it seen through the eyes of a driven youngster whose resilience is an inspiration to all she comes into contact with. It is a movie filled with a number of delicately effective moments, the filmmakers never rushing things as they let their story play itself out at its own naturalistic pace and not some amplified hyperactive one in what would have been a misbegotten desire to satiate those with short attention spans.

A veteran animator most known for working on The Secret of the Kells and The Painting, Rémi Chayé makes his directorial debut here, and his command of the story and the characters is noticeable right from the start. The early scenes showcasing Sacha’s assertive refusal to acquiesce to her parent’s wishes doesn’t sugarcoat her somewhat bratty selfishness even as it allows early insight into her rebelliously clever tenacity. How these facets of her personality evolve is explored in greater detail during the short sequence where she’s forced to work at the inn waiting for Lund to arrive, in the process discovering hard work and perseverance do pay off if one commits to the both of them.

This transformation gets paid off during the film’s exquisite second half. From the journey to a sea overflowing in ice and snow, to unspeakable tragedy, to unimaginable bravery, Sacha’s indomitable nature isn’t superhuman, which is exactly what makes it so wonderful. She’s coming into her own, discovering what she is capable of, the transition from needy teenager to competent young woman arguably more heroic than the potential discovery of the Davai’s last resting place ends up being.

Beautifully animated in its own, eye-popping, stylistically colorful way, the film is like some blissful combination of early Studio Ghibli crossed with the writings of Jack London. It is a timeless tale, one universal in scope and in resonance, building to a heartfelt conclusion that had me wiping away tears while at the same longing to rise to my feet in lively ovation. Long Way North is a small-scale gem deserving of being seen be as many as possible, the lessons learned mixed with the visually resplendent delights combining to make the film an emotionally optimistic sensation I unabashedly adored. 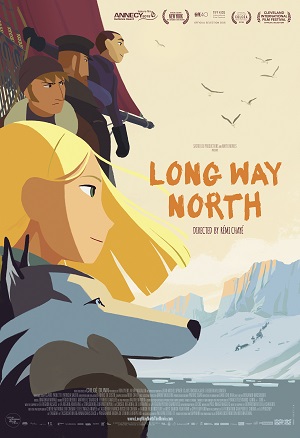