On January 15, 2009, Captain Chesley “Sully” Sullenberger accomplished the impossible. With both engines of his Airbus A320 damaged due to a freak bird strike, quickly determining there was no possible way to return to New York’s LaGuardia Airport without crashing, he decides on the only course of action available: he will land his plane in the Hudson River. In what was immediately dubbed “The Miracle on the Hudson,” all 155 passengers and crew aboard the plane survived, New York first responders, ferry boats and commuters pulling each and every one out to safety within minutes of the aircraft hitting the water. 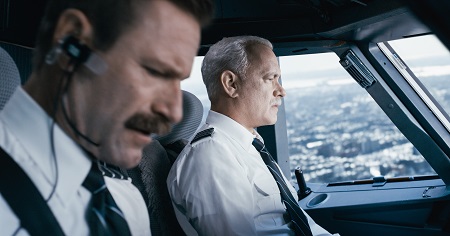 Clint Eastwood’s latest outing is easily the most streamlined and economical motion picture of the acclaimed actor-turned-director’s Oscar-winning career. With a deft, viscerally charged script by Todd Komarnicki (Perfect Stranger), itself born from Sullenberger’s memoir Highest Duty co-written with Jeffrey Zaslow, Sully is a confidently self-contained procedural that concerns itself with the incident, its aftermath, and how it affected the two men in the A320’s cockpit and little else. The director rarely allows his attentions to be maneuvered away from Sully and the emotions he finds himself dealing with immediately after his so-called heroics, and as such the movie ends up being one of the more thrillingly absorbing in all of Eastwood’s long and distinguished career.

Tom Hanks commands the screen as Sullenberger, while veteran character actor Aaron Eckhart is equally strong as his trusted co-pilot and friend Jeff Skiles. Also along for the ride is Laura Linney as Sully’s devoted wife Lorraine, while Mike O’Malley, Jamey Sheridan and Ana Gunn are three of the more vocal members of the National Transportation Safety Board (NTSB) who are suspicious events needed to play themselves out as they did. Other side characters filter in and out, little asides focusing on a few of the passengers aboard the plane, the crew members trying to maintain order, or those up in the flight tower attempting to come up with a solution to the plane’s miseries. But, by and large, this is a story about Sully, Skiles and what it took by all involved to accomplish what they dubbed a “forced water landing,” everything else incidental asides that have little bearing on the central emotional components being analyzed.

At barely 90 minutes, the movie plays as if it were shot out of a cannon. It zeroes in on Sullenberger’s mental state immediately, a terrifying nightmare of what could have happened in the skies above New York playing out within the first few minutes. The landing of the A320 on the Hudson is depicted three times, each from a different angle, the details coming to light with every replay startlingly intimate in its emotive strength. The second iteration, the one showcasing how the city of New York itself played a vital role in this January miracle is arguably the most effective, the way everyone from the Coast Guard, to Port Authority workers, to ferry boats filled with commuters jumped into action seconds after the plane hit the water simply extraordinary. 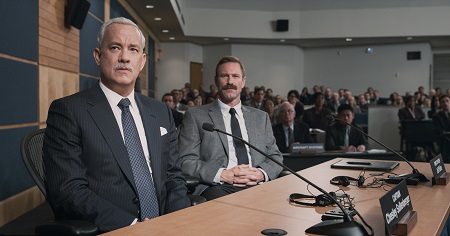 But even for a movie so gosh-darn efficient in its storytelling Eastwood still can’t help himself at times. Linney’s role is little more than a throwaway; Lorraine stranded, speaking to her husband over the telephone, yelping out melodramatic platitudes in order to ease his worried state of mind. It’s easy to understand why these scenes are here; they help showcase Sully’s insecurity over whether or not he made the right decision in landing the plane in the Hudson; they just aren’t particularly effective, the final confrontation between the two a particularly risible groaner that feels annoyingly out of place. Other hiccups include a series of subplots involving a trio of passengers heading out on a golfing holiday, while an appearance by Michael Rapaport as a boisterously talkative New York barkeep is so stereotypically on-the-nose it’s close to laughable.

Even so, the rest of the movie is so gosh-darn terrific these missteps feel relatively minor. When sticking to its procedural elements, Komarnicki’s script is smart, crisp and dynamic, while depictions of the A320’s water landing, as well as Sullenberger and Skiles’ interactions with the NTSB, are absolutely superb. While no Unforgiven or Bird, or really even a White Hunter, Black Heart or The Bridges of Madison County, Sully still shows that, when fully engaged, Eastwood is as great a director as any still working today, his rousing depiction of selfless heroism and unimaginable courage making my day and then some. 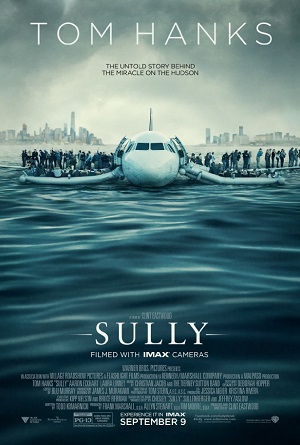