Jesus (Héctor Medina) never knew his father Angel (Jorge Perugorría). All he knows about him is that he was a boxer, a proud, viciously masculine hulk of a man who pounded his opponents into submission, and if not for drink, women and brushes with the law might have become a major Havana sports figure worthy of admiration. Angel is a ghost living in Jesus’ small, sparsely furnished apartment as nothing more than a monochromatic picture hanging on a random wall, the young man utterly content if that’s how things remain far into the foreseeable future.

Not that one would ever imagine that this is the son of a pugilistic heavyweight. Jesus is tall, lithe and decidedly effeminate. He makes his living as a hairstylist for his neighborhood’s elderly women while also designing the wigs for Havana Drag Queen and club owner Mama (Luis Alberto García), turning the random trick as a gay escort when things unfortunately get a little too financially uncomfortable. When an opening for a new performer comes available in Mama’s club Jesus eagerly applies, certain the extra income will allow him to stop prostituting himself in the local park. Just when things look brightest who walks back into the youngster’s life but none other than Angel, the drunken former boxer fresh out of prison and looking to reconnect with a son he holds little, if anything, in common with other than blood.

Viva is sensational. On one hand a deft, authentically intimate coming of age story of a young man trying to figure out who he is and what he wants to be while at the same time trying to understand a father he never wanted to know; on the other a gloriously subtle observational travelogue looking at Cuba in ways most have never seen before; this is an astounding marvel of a melodrama that captured my attention completely. This is somewhat surprising considering all of this is born from the minds of director Paddy Breathnach (Shrooms, Blow Dry) and actor-turned-screenwriter Mark O’Halloran, two Irishmen with not a lot in the way of Cuban blood between them.

Yet the pair have done something extraordinary here, allowing the simple, straightforward nature of the story to blossom with little in the way of excess pushing on either of their respective parts. As familiar as some of the interior dramatic elements might be, as close to cliché as they sometimes might come, Breathnach and O’Halloran allow Jesus’ journey towards self-actualization to resonate on a universal level while still keeping the character grounded in Cuban culture. It’s an astonishing tightrope act, the film feeling as fresh and as inspiring as a brisk breeze wafting across an empty grassy plain on a sunny Spring day.

Medina is a revelation. The relative newcomer (familiar to Cuban audiences but more or less a total unknown everywhere else in the world) delivers a staggering performance as Jesus, one that is bold, complex and raw. The pools of emotion wafting over his face at any given time are astonishing, the realization that the strange man who just belted him in the jaw for performing for him in a drag club heartbreakingly pure. Medina builds this character bit by bit, step by step, allowing his emotional changes to happen with captivating elasticity. It’s an unforgettable performance, everything building to a point of redemptive grace between father and son that mirrors their initial meeting and speaks to the story’s numerous familial themes with glorious simplicity.

I love how Breathnach, in a film with decidedly male protagonists, delicately allows the feminine to permeate through the proceedings. Not just because the younger of the duo is exploring his gender and sexual identity, but also because of the influence on both of their lives that is no longer there. Jesus’ mother might be dead but her presence lingers on, affecting both of these men in ways they are almost barely cognizant of. It is through her albums, a collection featuring a number of Cuban ballads performed by singers like Maggie Carles and Rosita Fornes, that we hear her voice, the way it brings these two to a place of understanding and acceptance downright lovely.

There aren’t a ton of surprises. It’s not like I didn’t know where things for Jesus and Angel were going to end up. Be that as it may, getting there was such a tremendous joy, such a monumental pleasure, it didn’t matter that the interior melodramatic tricks inherent to O’Halloran’s script weren’t exactly new and felt more than a little indebted to the films of Douglas Sirk. I loved this movie. I was blown away by Medina’s performance, shell-shocked by the level of intimacy that Breathnach is able to create as things work their way towards their redemptive conclusion. A story of self, gender, identity and family, Viva is an absolute gem worthy of raucous celebration. 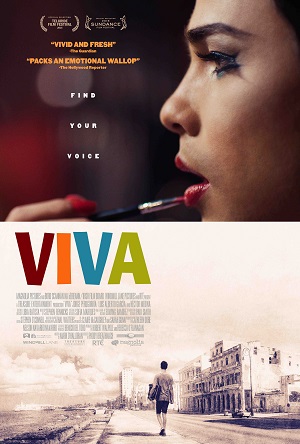