“Life’s a little bit messy. We all make mistakes. No matter what type of animal you are, change starts with you.”

“Judy Hopps (voiced by Ginnifer Goodwin) has a dream. She’s going to become the first bunny police officer in Zootopia, and nothing is going to stop her from seeing these law enforcement aspirations come to pass. Her new boss, the massive cape buffalo Chief Bogo (Idris Elba) wants nothing to do with the pint-sized rookie, but with Mayor Lionheart (J.K. Simmons) roaring down his neck he’s at least got to give the eager bunny a chance to prove herself. He allows Judy to tackle a difficult missing animals case, this a golden opportunity to prove she’s got no business carrying a badge, and if she can’t solve the mystery he’s going to see her sent back to Bunnyburrow where he feels she belongs.

But the young, intelligent bunny is undaunted. Even when she’s forced to team up with unscrupulous con artist, and a fox, Nick Wilde (Jason Bateman), Judy is going to put the pieces of this puzzle together no matter how high up the political food chain things might climb. She’s going to prove herself to all of the doubters, especially Chief Bogo, forging an unexpected friendship with the streetwise Nick in the process.

On the animated front, Disney’s Zootopia is reminiscent of hand-drawn studio classics like Robin Hood, The Aristocats or The Rescuers. As far as the narrative side of the equation is concerned, the film plays both like a 1980’s-style buddy comedy like Midnight Run or 48 Hrs. as well as film noir classics like The Big Sleep or Chinatown. It is a deft, hugely enjoyable frolic through a what-if world the likes of which I cannot say I’ve ever seen before, the level of imagination continually on display impressive to say the least.

Judy Hopps is a terrific character, and Goodwin voices her beautifully. This is a vibrant, energetically alive performance that’s a consistent treat, watching her force her way inside this world just plain wonderful. Goodwin’s chemistry with Bateman is off the charts, the development of their friendship happening with a carefree innocence that’s continually charming. They have a Mutt and Jeff rapport that’s splendid, and even when Judy and Nick appear to be working at cross purposes there’s never a doubt the two are going to find a way to overcome their differences and make their burgeoning partnership all the stronger in the process.

The central mystery involving the missing animals, all predators, all apparently giving into the baser, primordial instincts before they vanished, is both too convoluted for its own good and also exceedingly easy to figure out. Thing is, that’s okay, because there are so many terrific little touches sprinkled throughout that the fact the actual case the heroes are trying to solve is such utter nonsense is in and of itself just another element helping fuel the fun. While echoes of L.A. Confidential and The Manchurian Candidate will undoubtedly bring a knowing smile to the face of many of the adults in the audience, kids will be blown away by all the mammal-crazy weirdness. It’s a cornucopia of crazy sight gags, witty one-liners and heartfelt emotional growth, the general life lessons being imparted ones young and old alike should embrace with equal enthusiasm.

If Zootopia isn’t the same sort of sensation that Tangled or Frozen were, that doesn’t make it any less wonderful. Reminiscent of Wreck-It Ralph, the film is another winner for Disney proper (i.e. non-Pixar related) and shows the studio is still a force to be reckoned with where it comes to their animated offerings. It’s a total hoot, and as such I expect it to become a massive hit kids will be watching over and over and over again for many years to come.”

Disney’s Zootopia just gets better and better with each viewing. I still don’t think it’s outstanding, but that doesn’t make the film any less wonderful, and I can’t help but think viewers of all ages will want to snatch it up for their respective Blu-ray libraries as quickly as they can.

Research: A True-Life Adventure (9:58) – Filmmakers draw from the animal kingdom itself as they attempt to give Zootopia its life.

The Origin of an Animal Tale (9:15) – Filmmakers discuss what drew and inspired them to make the movies, as well as the various themes they hoped audiences would draw inspiration from.

Zoology: The Roundtable
Characters (5:47) – A look at each of the primary characters and how they were created.
Environments (5:44) – A delightful look at the various landscapes and locales Judy and Nick travel through as they put the pieces of this mysterious puzzle together.
Animation (6:52) – A detailed look at the animation process and what the animators went through to get every facet of Zootopia right.

Scoretopia (4:59) – A terrific, if a little too short, piece looking at veteran composer Michael Giacchino’s unique and energetic score.

Z.P.D. Forensic Files (3:23) – Disney fanatics need to watch this short little featurette right away, and that is all I’m going to say about it.

Zootopia is really good. Imaginative, full of life and filled with a number of sublime themes viewers of every age could use to learn from, Disney’s latest animated effort is a true joy from start to finish. This Blu-ray release is as marvelous as it is essential, and as such comes highly recommended. 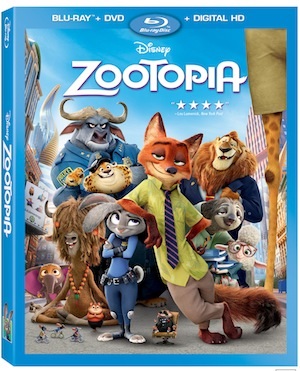