Heroic All is Lost a Survivalist Triumph

The survivalist adventure All is Lost is inevitably going to be compared to Gravity. Both films, at their core, are about a lone individual trapped within an unimaginable expanse, the former revolving around Robert Redford’s attempts to endure in the middle of the Indian Ocean while the latter box office hit stars Sandra Bullock as a newbie astronaut floating alone above the Earth. Differing settings aside, however, they are more or less the same sort of motion picture telling relatively similar stories, at their core each a saga of the human spirit prevailing in the most impossible of situations in spite of any and all obstacles thrown their respective protagonist’s way. 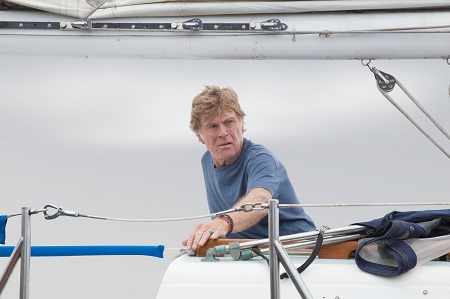 I’m not going to attempt to make a determination which film I think is better. I will say, as cinematically stunning as director Alfonso Cuarón’s sci-fi spectacle is, out of the two I do prefer writer/director J.C. Chandor’s effort a tiny bit more. Redford’s seventy-something everyman (the actor is 77, if you can believe it) could be anybody, male or female, and I could relate to him in ways I frequently found shocking. His plight I could grasp and understand in ways that were instinctual, intimate, making his quest to survive all the more gut-wrenching and thrilling.

It’s hard to believe that Chandor’s freshman effort was the excellent Wall Street financial meltdown procedural Margin Call. That movie was all about the dialogue, all about the rat-a-tat-tat rhythms of one actor working in tandem with the others sharing their scenes. It was a David Mamet-like examination of diverse individuals trying to find ways to transform unthinkable calamity to their own benefit, some unwilling to mortgage their souls in the process of doing so while others didn’t hold their moral centers nearly as sacrosanct.

All is Lost is a different animal in every way. Almost completely devoid of dialogue, featuring a nameless hero who we know literally nothing substantive about other than he has children he feels the need to at least write some sort of message to even if he knows it’s unlikely they’ll ever read it, the movie is almost experimental. It is an existential thriller reminding one in some ways of Australian classics like Walkabout and Picnic at Hanging Rock. But even those films had more characters, more dialogue and more of just about everything than this does, and at surface  glance one could reasonably assume this might not be the most audience-friendly picture screening at the local multiplex.

But those assumptions would be wrong. Chandor’s genius is that he’s manufactured a suspenseful adventure that is immediately relatable, a movie that is shockingly easy to slip into the shoes of its main character. More often than not I got the feeling the waves crashing against the side of our hero’s sinking ship were slapping me in the face as well, and as such the horrifying all-encompassing terror of the situation was intense in ways that had me clutching my armrests as if I were in danger of floating out into the middle of the sea.

The plot is pure simplicity. A lone sailor in the middle of the Indian Ocean awakens to discover his vessel has had an unforeseeable accident coming into contact with floating debris. Fixing things as best he can, his damaged ship suddenly finds itself in the middle of a massive storm weakening it even further. Sinking, with time running out, with edible supplies dwindling, he must use his strength, wit, intellect and courage to find a way to survive, hoping his efforts will not be in vain and he can somehow get into the shipping lanes and be saved by a passing boat. 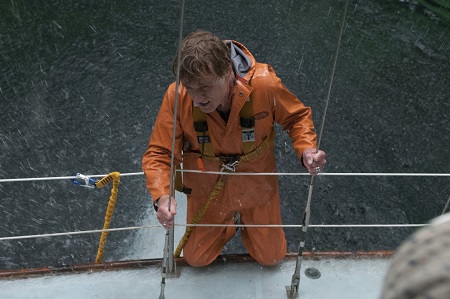 That’s it, that’s all Chandor’s sophomore effort is about, becoming in the process a universally accessible thriller of the first degree as it floats its way to its triumphant conclusion. It is anchored by a performance by Redford that might just be the best the legendary actor/director has ever given, mining internal territories that constantly amaze and surprise. He isn’t a superman, isn’t doing something we cannot comprehend or relate to, he’s just doing his best to survive and using all his faculties, both physical and mental, to do it. Redford’s transformation, the gamut of emotions he runs through, all of it relatable, the veteran Hollywood icon disappearing into the character completely.

As for the director, he’s in complete control crafting a hypnotic deluge of tragedy and triumph that’s dazzling. He allows his cinematographers Frank G. DeMarco (Margin Call) and Peter Zuccarini to achieve singular, one of kind visuals, editor Pete Beaudreau (XX/XY) seamlessly assembling sequences and images together that’s natural and unforced. Chandor captains this ship with confidence, no facet left to chance, all pieces working in tandem with the next allowing for the emotional majesty of the central thrust to grab hold and never let go. All is Lost is a triumph, no more, and certainly no less, and my gut feeling is that viewers who take up the challenge to see it in a theatre will likely feel the same.