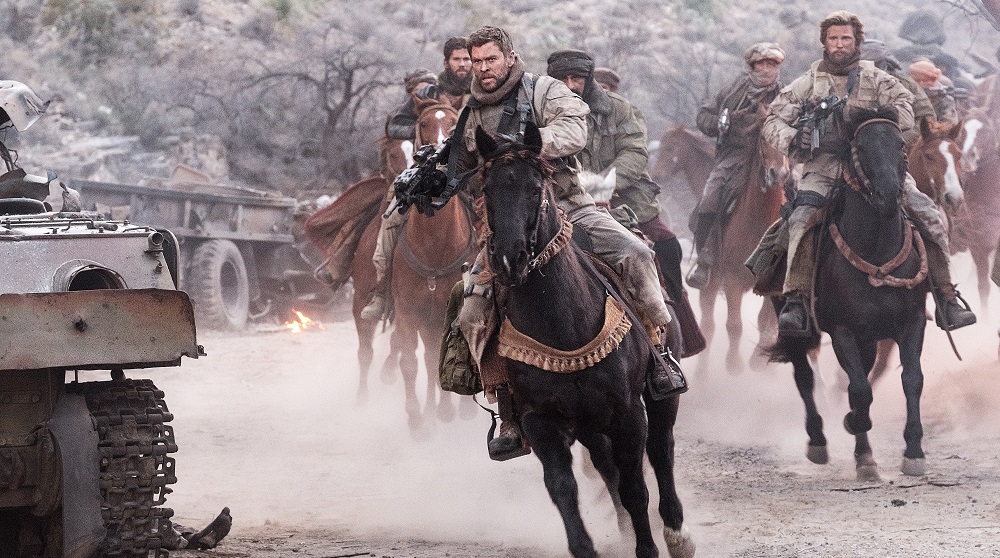 After the events of September 11, 2001, Army Special Forces Captain Mitch Nelson (Chris Hemsworth) leaves his desk job to rejoin his elite military unit knowing they’ll be sent out to retaliate against those that attacked New York the second the Pentagon and United States intelligence services determine who was responsible. Once it is ascertained that Al Qaeda hiding in Afghanistan played the primary role in this terrorist assault, Nelson and his team are immediately on their way to the country as the tip of the proverbial spear.

But historically Afghanistan has never been anything close to a picnic for invading armies. Brutal winters. Impenetrable mountainous terrain filled with caves enemies can hide in undetected for months at a time. Centuries of tribal anger that has led to warlords battling other warlords leaving the country in the hands of the Taliban, a collection of cutthroats perfectly content to let Al Qaeda do their own thing just as long as they continue to militarily support their own fundamentalist ambitions. Into this human minefield Nelson and his men are dropped, and with less than a month to do it they have to ease tensions between the tribes, make friends with respected Afghan General Abdul Rashid Dostum (Navid Negahban) and cut off all key support and supply routes for Al Qaeda and the Taliban before winter begins making doing so next to impossible.

Based on the declassified true story of the first 12 U.S. soldiers dropped into Afghanistan, all of whom are forced to fight on horseback like a wild west Cavalry unit circa 1890, 12 Strong is a well made, moderately overwrought military drama almost certain to play well with those who helped make efforts like Lone Survivor and American Sniper box office hits. With the likes of Hemsworth, Michael Shannon, Michael Peña, Trevante Rhodes, Austin Stowell, William Fichtner and Rob Riggle (the veteran comedian a retired Marine Corps Reserve Lieutenant Colonel who served in Liberia, Kosovo, and Afghanistan) filling primary roles, the film also proves to be remarkably easy to watch even for those who aren’t normally drawn to this sort of tale, director Nicolai Fuglsig utilizing his talented ensemble with captivating authority.

But the movie itself is a vexing narrative conundrum. Writers Ted Tally (The Silence of the Lambs) and Peter Craig (Blood Father) adapt Doug Stanton’s best-selling book Horse Soldiers in a way that feels oddly mannered yet also infuriatingly unfocused, almost as if they couldn’t figure out the best way to approach the story. It often plays like second-rate militaristic propaganda, the jingoistic heights some of the more melodramatically onerous elements rise to coming perilously close to being loathsome. At the same time, there are also some shockingly honest and nakedly raw insights looking at the early days of the Afghan War that are refreshingly genuine, forcing the audience to look at what is going on in the country in a way maybe they’d never thought to do so before.

What Fuglsig and his creative team get right is the dynamic between Nelson and his unit. The way these men bond together, what they are willing to do in order to see their mission accomplished, all of that rings true. I loved the way in which Nelson interacts with his confidant and friend Chief Warrant Officer Hal Spencer (Shannon). The pair share a camaraderie that’s explored in a way where what is unspoken says more than a single word uttered out loud does, and if Hemsworth and Shannon wanted to team up for an old school Western revolving around two longtime friends riding the range in search of their next shot of Whiskey I’d be first in line to see it I kid you not.

Fuglsig also shows a magnetic ability to stage rousing action sequences, the director working with cinematographer Rasmus Videbæk (The Dark Tower) to craft images bursting in tension and suspense while editor Lisa Lassek (Avengers: Age of Ultron) fits it all together in a way that’s satisfying in its crisp unfussiness. The sequence depicting Nelson and members of his team calling in their first airstrike against a Taliban stronghold is particularly noteworthy, the way it showcases the size and scope of what it is the U.S. military is up against while at the same time keeps things intimate and personal allows for a human element to develop between the Special Forces Captain and the Afghan General I hadn’t anticipated and wholly responded to. 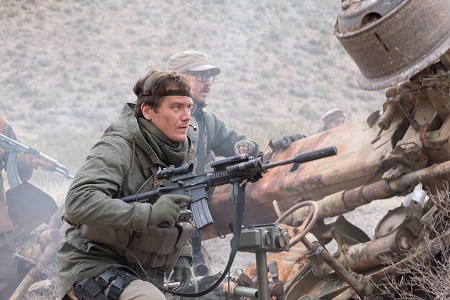 Yet other facets of the movie are so self-important, so belligerently didactic, my emotional investment in what was going on could sadly only last for so long. While not as outrageously xenophobic as Michael Bay’s 13 Hours might have been, there are still instances where Fuglsig goes out of his way to make Taliban leaders look like Rambo: First Blood Part II or Missing in Action villains, adding a level of cartoonish exploitation that honestly wasn’t necessary. It’s like the director couldn’t decide if he was making an honest examination of the Afghan conflict or instead some B-grade actioner where the bad guys can’t hit the broadside of the mountain and good guys never miss even when they’re firing automatic machine guns while riding a horse racing across the frigid tundra at a full gallop.

With the war in Afghanistan ongoing and no immediate end to the conflict in sight, the fact 12 Strong plays like nationalistic propaganda shouldn’t be surprising. There are too many complex layers to this story, too many uncomfortable truths that are difficult to stand in front of a mirror and look at with any sort of clarity at this moment in history. While the story of these dozen soldiers deserved to be told, while their actions were unquestionably selfless in their heroic resolve, that doesn’t mean the movie chronicling their deeds isn’t without its faults. There’s just as much to like here as there is to be frustrated with, the final product a mixed bag of good intentions, decent ideas and missed opportunities I honestly don’t know entirely what to make of. 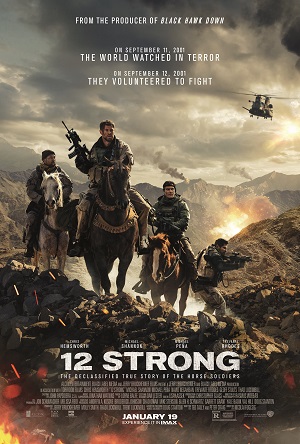