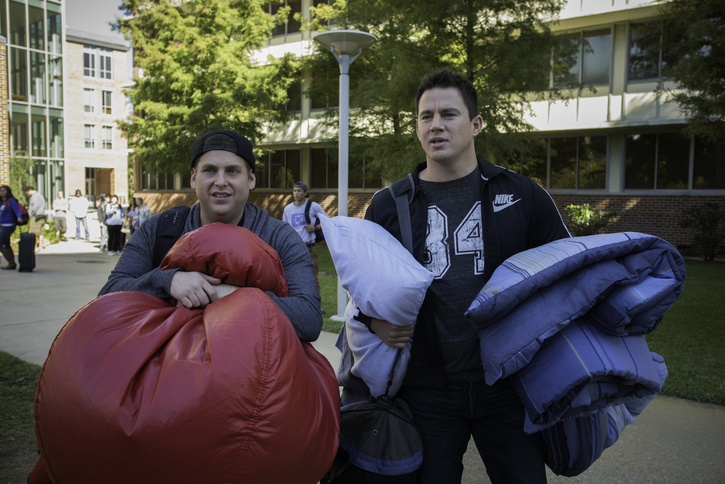 I find that I could probably write the same review for 22 Jump Street I did for its predecessor 21 Jump Street. Character development? Not important. Continuity? Shaky at best. Narrative structure? It’s comes close to being nonexistent. Plot? Unimportant in the extreme, almost as if it were an afterthought on the part of the returning team of filmmakers, notably directors Phil Lord and Chris Miller and stars Channing Tatum and Jonah Hill.

But is it funny? The answer to that question is a rousing, unequivocal yes, 22 Jump Street containing more laughs in its first 15 minutes than most features can manage for a full 90 (let alone the close to two hours this sequel runs). There are moments that had me wiping tears from my eyes, Tatum and Hill proving once again they are a comedy team for the ages showcasing the potential to be mentioned alongside the all-time greats. They are the reason this works nearly as well as it does, the heights it soars to in most rights due to them and them alone. 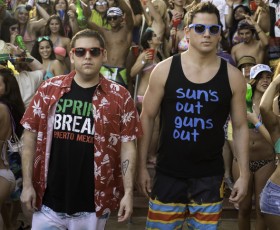 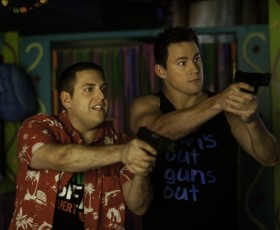 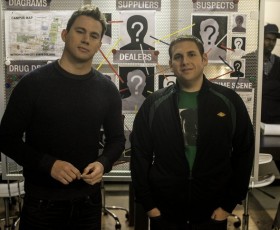 Be that as it may, I’m not completely certain it’s enough this time around. 22 Jump Street constantly comments on itself, making sure viewers understand in no uncertain terms that the comedy they are watching is a sequel to a popular hit many didn’t think was going to be so, let alone that it would also turn out to be, you know, good. It also is quite knowledgeable about the fact that, by and large, comedy sequels are never, ever successful, attempting to lower expectation just as it delivers a laugh-out-loud sucker punch almost impossible to see coming.

And it’s terrific those moments are there because I’m hard-pressed to believe I’d be willing to recommend 22 Jump Street, let alone to admit to having enjoyed it, if they hadn’t popped up with such effervescent frequency. The fact the plot is such a massive afterthought did weigh on me after a point, as did the reliance on tons of supposedly humorous situations revolving around the fact undercover officers Jenko (Tatum) and Schmidt (Hill) are ‘partners,’ and for the life of me I can’t quite figure out if that latter item makes the film homophobic or inspired.

Said plot, what there is of one, finds the two detectives sent to college to investigate the emergence of a brand new drug on the verge of expanding nationwide or, as their superior Captain Dickson (Ice Cube) likes to put it, the exact same thing they were asked to do when they were tasked with infiltrating a High School. Jenko infiltrates a popular fraternity, his prowess on the football field gaining them their trust after a single catch, while Schmidt becomes way more than friends with the ex-roommate, Maya (Amber Stevens), of the woman the pair are investigating. They bicker, they clash and they fall apart, all of that happening on their road to reconciliation as the twosome see their friendship solidified and their desire to close the case strengthened as things near their preordained end.

Lord and Miller orchestrate everything taking place with confident flair, keeping things zipping forward even if what’s taking place isn’t particularly noteworthy. They prove once again they might be the most exciting comedic filmmakers working today, knowing just which jokes to highlight and which ones to quickly move on from. They have an innate ability to make 112 minutes fly by in the blink of an eye, self-assuredly connecting dialogue and images together with whiplash precision that boldly breaks convention setting new standards future filmmakers will undoubtedly emulate sometime soon.

But even they can’t work outright miracles. The scattershot nature of the first Jump Street was mildly charming, working in direct tandem with the film itself most of the time and rarely – if ever – in direct opposition to it. This time around the seams are far more noticeable, and not just because the sequel blatantly calls attention to the fact. It’s herky-jerky storytelling in the extreme, the only thing missing commercial breaks separating each mini-vignette from the next, everything culminating exactly as I expected it to right from the start.

Still, the most important factor is whether or not all this is funny, and thankfully it is that in spades. There are plenty of moments that had me wanting to stand up and cheer, Tatum again showing a self-effacing glee in deconstructing his own masculine image the overall effect of which on the audience is blissfully mind-blowing. His chemistry with Hill remains off the charts, the pair having a Mutt and Jeff eloquence to their exchanges that’s superb.

I do wish they had a made a real movie, however, and not just an excuse to crack wise and play with conventions in a somewhat self-congratulatory tone. Miller and Lord are too talented to keep running in these sorts of circles too much longer, while Tatum and Hill deserve to turn their attentions towards something edgier, less obnoxiously dim.

Don’t misunderstand; 22 Jump Street is a heck of a lot of fun, full of numerous, ribald laughs worthy of celebration, but it’s just not as satisfying this time around, at least for me it wasn’t. As entertaining as it ultimately proves to be, if this ends up being the last ride for Jenko and Schmidt that wouldn’t bother me one single bit. 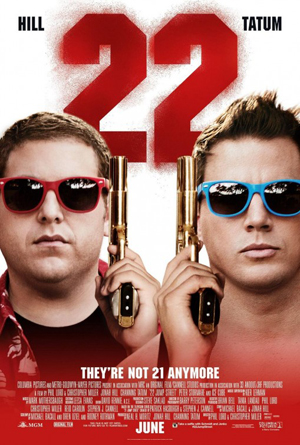