Good intention or interesting ideas do not necessarily make for a well-made, let alone entertaining, motion picture. Such is the case with Act of Valor, a terrorism-themed action movie starring real-life Navy SEALs in all of the principal roles. Using declassified missions as a jumping off point, the movie purports to show what it is really like out there in the murky waters of international terror. What it actually ends up being is a second-rate action flick straight out of the 1980s Golam-Globus playbook à la Chuck Norris ‘classics’ Missing in Action or Invasion U.S.A.

I’m not sure what else there is to say. Directors Mike ‘Mouse’ McCoy and Scott Waugh, a.k.a. the Bandito Brothers, are known for producing visually electric documentaries like Dust to Glory and Step Into Liquid, but as fiction-based filmmakers they leave a lot to be desired. There is no sense of time to their movie, no consistent pace or tone, and while I appreciate that they don’t edit at the metronomic rate of a jackhammer the line separating them from say someone like Michael Bay is still relatively thin.

But the big problem is the script. Kurt Johnstad (300) was put in the unenviable position of having to take actual Navy SEAL missions and then collate them into some sort of narrative cohesion. What he’s delivered is a second-rate hodgepodge of cliché and militaristic melodrama so ripe it wouldn’t have passed muster on a subpar episode of “24.” The dialogue is dreadful, the human aspects so saccharine they’re practically laughable and tension is virtually nonexistent. To call this monstrosity anything other than a mess would be a kindness, so guess I’ll just say Act of Valor is a bad film and then leave it at that.

I’m not mentioning the SEALs because I just don’t feel the need to toss scorn at soldiers tasked with doing something outside of their normal skillset. While they all look believable holding and firing their weapons or engaged in the minutia of their various mission parameters, actors they are not. Whenever they’re forced to speak Johnstad’s insipid lines of rah-rah didactic machismo I couldn’t help but roll my eyes, and by the time things come to their inevitably idiotic, tragically heroic conclusion it was all I could do to keep from vomiting into my empty popcorn bag.

The action scenes do look great, so that’s a positive I can crow about. Shane Hurlbut’s (Terminator Salvation) cinematography is crisp and clear, and whenever McCoy and Waugh let the image speak for itself and don’t edit things into unintelligible delirium there’s an eye-popping magnetism to some of the scenes that’s undeniably impressive. But there is no energy to what is happening, no heft to the situations as presented. The SEALs are so good at their job, so clinical in their execution, it all surprisingly flatlines just as the energy level should be rising to a fever pitch, making for an odd emotional disconnect I found more than a bit perplexing.

There is one notable exception, and it’s a biggie. After the team captures an international arms dealer (nicely underplayed by Alex Veadov) he’s interrogated by the group’s Senior Chief. This scene, apparently more or less improvised by the two men, one an actor, the other a guy who does this sort of thing for a living, is alive and vibrant to the point it leaps off the screen. The two verbally joust, the former struggling to keep up as the latter twists his words round and round like doughy pretzels ready for the fryer. This one, five-plus minute sequence is everything the rest of the movie is not, and for one brief, shimmering moment Act of Valor achieves the realistic verisimilitude the filmmakers were obviously hoping to achieve throughout.

I haven’t spent a lot of time diving into the plot because there really isn’t any need to. There’s a terrorist, he has a plan to unleash bloody havoc upon the United States and it’s up to an elite team of Navy SEALs to stop him. That’s it. It’s that simple. If the movie had been even remotely good I’d have been fine with that. As it isn’t? Sorry, but there just isn’t a heck of a lot more to say.

Act of Valor will get a lot of press for casting real soldiers as its heroes and for using actual declassified Navy SEAL operations as the foundation for its plot. As far as that authenticity goes, the way the SEALs enter into conflict and handle themselves under fire certainly feels a heck of a lot more realistic than say Charlie Sheen doing in baddies in Navy Seals or Chuck Norris and Lee Marvin riding shotgun in Delta Force. But the script for this isn’t any better than it was in those forgotten B-grade gems of ‘80s action chutzpah, and I hardly think anyone is going to be hoo-rahing this oddly forgettable effort at any point in the foreseeable future. 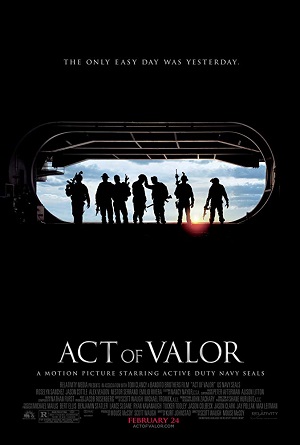