I disliked 2016’s The Angry Birds Movie so much I didn’t even both writing a review for it. As I had watched it on my own time I just didn’t have the energy to put my overall disgust of the animated comedy into words. There wasn’t a reason to do so, and as the film was only a moderate box office success (just barely clearing $100-million in domestic ticket sales) I never anticipated there would be a sequel, and as such worked at forgetting about it entirely because letting it take up valuable space in my memory felt rather pointless.

Yet here we are all the same, The Angry Birds Movie 2 releasing into theatres around the globe this very weekend. Happily, I did not loathe this sequel near as much as I did its predecessor. There’s some inventively funny stuff along with a couple of ingenious visual flourishes this time around, and I can’t say this endeavor taxed my patience as I sat there through all 96 minutes of it in any noticeable way. None of which means I liked the film. None of which means I’m going to be recommending anyone take the time to go and see it for themselves. I’m just saying I didn’t want to burn my eyes out of their sockets after watching it like I did when I finished with the first one, and as positives go that’s pretty much the best I’ve got.

After helping save Bird Island and all of its eggs from Piggy Island’s monarch Leonard (voiced by Bill Hader), perpetually angry Red (Jason Sudeikis) and his pals Chuck (Josh Gad) and Bomb (Danny McBride) are considered community heroes. Now all they have to deal with are the series of crazy pranks the two islands catapult back and forth between one another, Red and Leonard playing a continual game of one-upmanship that’s as silly as it is pointless. But after both communities are struck with giant balls of ice it becomes apparent there is a new threat Bird and Piggy way of life. Eagle Island has awoken from its long dormancy, its ruler Zeta (Leslie Jones) intent on taking over control of Bird Island and Piggy Island for reasons entirely her own.

To save Bird and Piggy kind alike, Red and Leonard join forces to stop Zeta from going through with her dastardly plan at island domination. They’ve formed a super-team made up Chuck, his whip-smart sister Silver (Rachel Bloom), Bomb, Mighty Eagle (Peter Dinklage), Leonard’s assistant Courtney (Awkwafina) and pig scientist Gary (Sterling K. Brown), and together they’ll secretly head to Eagle Island and destroy their ice canon superweapon. Through it all they’ll battle various internal demons, Red in particular, everyone learning something new about themselves as their infiltration mission progresses towards an explosive conclusion.

As much plot as that sounds like, that still doesn’t mean this sequel spends a lot of time focusing too intently upon it. There are frequent interludes involving the inhabitants of Bird Island or Eagle Island where all sorts of peculiarities happen, while there’s also a key subplot focusing entirely upon a trio of bird chicks trying to recover some eggs they’ve inadvertently allowed to float away into the center of the ocean. It all ends up playing like a series of vaguely and whimsically interconnected comedic vignettes, each of them so absurdly strange and eccentric it’s practically impossible not to find at least some of them worthy of a chuckle or two.

Other than that, I guess I should mention how, once again, the filmmakers have assembled one of the more impressive vocal casts that’s ever been involved with an animated motion picture. In addition to those already mentioned, the actors appearing here who have at least one line of dialogue include Tiffany Haddish, Eugenio Derbez, Pete Davidson, Tony Hale, Dove Cameron, Brooklynn Prince, Nicki Minaj, Lil Rel Howery and Maya Rudolph. I can’t say all of them make an impression, but that they are all part of this sure does make sitting through the end credits interesting, discovering who voiced which minor character admittedly a wee bit of fun.

I can easily see how younger kids are going to love this sequel. I can also see how most parents who watch it with them will chortle just enough to feel like their time sitting in the theatre hasn’t been ill-spent. For me, though, while The Angry Birds Movie 2 is a vast improvement over its predecessor, and while I did laugh on more than one occasion, this is still one franchise that still has a long way to go if it is ever going to win me over. This sequel doesn’t lay an egg but it’s still plenty scrambled, and as such ends up being one goofy comedic venture I have no intention of wasting any more of my time talking about. 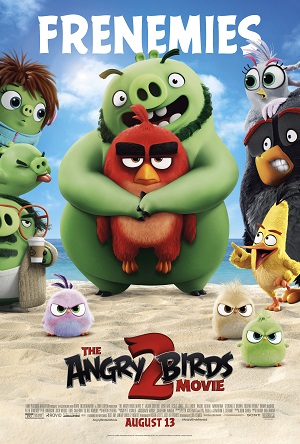