Michael Stone (voiced by David Thewlis) is the best-selling author of a service industry manual entitled “How May I Help You Help Them?” currently on a business trip in Cincinnati to deliver a speech at a gathering of customer service representatives. He is going through some form of psychological disrepair, unable to figure out what is wrong other than he’s feeling depressingly distant from his wife and child back home in California. He calls an old flame, offering to buy her a drink at his hotel, but the meeting hardly goes as well as he wanted it to, so when the reunion unceremoniously comes to an end he tromps back up to his room to call it a night.

But in the hallway he runs into two young women attending the next day’s conference. Each is a big fan of his book and proclaim to be eagerly anticipating his keynote address. Michael offers to buy them a drink in the hotel bar, and while he finds himself drawn to both women, there is something about the quiet, demure Lisa Hesselman (Jennifer Jason Leigh) that captures his attention in a way he hasn’t known in quite some time. When the two retire back to his room, sparks soon fly both emotionally and psychologically, the author learning more about himself, as well as why it is he’s become so withdrawn and sullen, than he was by all accounts prepared to know.

The stop-motion animated drama Anomalisa is the latest oddity born from the mind of celebrated screenwriter and director Charlie Kaufman (Being John Malkovich, Adaptation). Co-directing with celebrated animator Duke Johnson, the man behind Adult Swim’s “Moral Orel” and “Mary Shelley’s Frankenhole,” as well as the Abed’s “Uncontrollable Christmas” episode of NBC’s “Community,” the movie is every bit as idiosyncratic and imaginative as one would naturally assume it was going to be. Safe to say, family-friendly this animated melodrama is not, the narrative diving headfirst into murky sub-textual psychological waters that are as dense as they are complex.

Yet, while Anomalisa is certainly good, I honestly don’t have the first clue if it’s anything remotely close to the masterpiece so many who saw it during last year’s Venice Film Festival – where it won the prestigious Grand Jury Prize – instantly proclaimed it to be. Maybe I just didn’t get it. Maybe aspects of it were just too far beyond me. Maybe Kaufman is just too esoteric for my own personal comfort because, goodness knows, I felt very much similar after watching his first directorial endeavor, the Philip Seymour Hoffman-starring Synecdoche, New York back in 2008.

This movie, as weird and as unusual as it might become, is many ways fairly cut and dry, following a tired, rundown man as he learns through trial and error that his life isn’t as devoid of love and light as he for some reason believes it to be. All of which is fine, but once one strips away the visual veneer, gets past the eye-popping animation and the more surrealistic narrative beats, there’s not all that much actually going on. Or, at least, not much that I could see. As such I kept trying to find more layers hiding within the cracks, elements of depth and nuance I frustratingly, for whatever reason, was never quite able to find.

The thing is, as thin as I found the central story itself to be, the combination of the superlative performances and the astonishing animation ends up making Kaufman and Johnson’s opus something somewhat special all the same. Visually, I can’t think of any other motion picture, even other stop-motion ones, which Anomalisa can be compared to. The way director of photography Joe Passarelli’s camera glides through the environs that have been created, the exquisite way in which editor Garret Elkins has assembled things together, there is a hypnotic quality developing throughout that’s impossible to dismiss and even more difficult to resist.

As for the actors, both Thewlis and Leigh are superb, adding dimensionality and nuance to Michael and Lisa that’s wondrous. But the real star of the show is veteran character actor Tom Noonan. He doesn’t just portray every other character in the film, young and old, male and female, he also manages to craft individualistic personas for every one of them no matter who they are, what their backgrounds or what part it is they are playing – big, small or in-between – inside the story itself. It’s a masterful, close to brilliant piece of vocal acting, deserving of recognition and acclaim, Noonan adding just the right component that allows the surrealistic energy fueling the drama to resonate far more intriguingly than it otherwise would have.

Anomalisa is fascinating, and I cannot say I was ever bored by anything that Kaufman and Johnson were choosing to show me. Same time, I do admit to wishing I found more of substance to latch on to; and while I freely admit that possibly some of the cryptic intellectual arguments the filmmakers were attempting to navigate might have flown a little over my head, I’m fairly certain this was not the case. Still, this is as distinctive and as one-of-a-kind an endeavor as anything there is currently in theatres, and as such I do hope intrigued potential viewers seek the film out and give it a long, hard look. 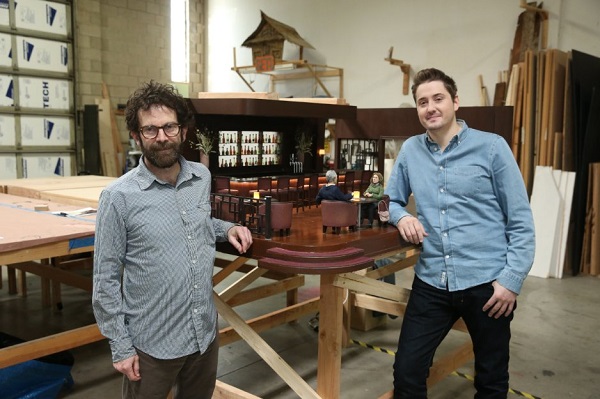 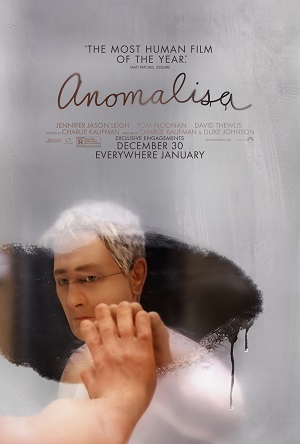