In the town of Salem, high school seniors Lily (Odessa Young), Bex (Hari Nef), Em (Abra) and Sarah (Suki Waterhouse) have somehow become the most hated quartet of teenagers in all of America. Their small, conservatively close-knit community is in the middle of a total meltdown, a mysterious hacker disclosing over half of the population’s secrets on the internet for the world to see. For a variety of reasons, these four young women have become the focal point for all of Salem’s fear, hysteria and anger. When the rule of law breaks down, the four friends are forced to take violent action in order to defend themselves, choosing to fight back against the violent delusions of members of their community who are for some reason psychotically determined to wipe the very existence of these teenagers off the face of the earth.

Audiences sitting down to watch writer/director Sam Levinson’s (Another Happy Day) sophomore outing can’t say the film doesn’t give them fair notice in regards to what it is they are about to watch. An opening montage highlights all of the movie’s aggressively satirical ambitions, going through a long list of “Trigger Warnings” including hot-button topics like bullying, classism, toxic masculinity, homophobia, transphobia, nationalism, racism, the male gaze, sexism, torture, violence, gore and the fragile male ego. This is a movie that is going to dive deep into the raging societal hypocrisies lurking right at the center of modern Americana, doing so in a way that will be decidedly uncomfortable for viewers who decide to give it a look, especially men.

In particular, conservative-leaning white men. Levinson’s drama is unapologetically feminist, looking at male privilege through a liberal-leaning lens that’s obvious throughout. Most of the guys who play a major part of this story cannot handle having their fragile egos attacked, and even though it’s their own actions that have been put under the microscope they’re still unwilling to take responsibility for anything they’ve done. Instead, they find ways to blame others for their missteps, most notably by putting Lily, Bex, Em and Sarah in the condemnatory crosshairs the citizens of Salem find more palatable than being forced to deal with unpleasant truths. They deflect and come up with excuses for their actions, embracing a holier-than-though sanctimony that’s transparently insincere.

Not that Levinson lets his heroes off the hook. These ladies aren’t perfect angels. They’re navigating the complicated waters of high school dealing with a world so reliant upon social media that each Twitter tweet, Facebook post or image uploaded to Instagram could have a wide variety of unforeseen repercussions that might change the course of a person’s life forever. They can be selfish. They can be vain. They can let their own personal self-interests influence their actions in ways that impact others negatively. They drink, cuss and experiment with sex and drugs with enthusiastic gusto, never thinking any of their actions could come back and haunt them later on.

But here’s the thing. They’re not doing anything that their fellow male classmates aren’t also out there attempting, things that they all get celebrated for trying while female teens like Lily, Bex, Em and Sarah are labeled as sluts, bimbos and whores when they do the same. More importantly, Levinson does a fine job of showcasing just how strong the friendship for this quartet is, their bond authentically naturalistic. They’re all there for one another, and as surrealistic and fantastically unhinged as things become that facet of the film emotionally grounds the story in a way that’s continually surprising.

It should be noted that none of the points being made here are in anyway subtle. They’re also blatantly obvious. But that doesn’t make what Levinson is saying any less vital or important. His observations on what’s happening in the United States culturally right now is fairly spot-on, and as extreme and as exploitive as things get all one has to do is watch a Presidential rally or turn on the nightly news and realize it wouldn’t take all that many steps for civilization to dehumanize itself in a somewhat similar fashion. Levinson takes “boys will be boys” and asserts that all of us, women in particular, should just shut up and be okay with takimg that cliché to its logical conclusion, the fact these four women won’t do just that the reason they end up being put right into the middle of the violently hypochondriacal crosshairs.

Not all of it works, and Levinson takes his sweet time letting things in Salem completely devolve into pandemonium. But I loved the performances coaxes out of Nef, Abra, Waterhouse and especially Young, all four actresses traversing into unexpected emotive terrain that frequently caught me unprepared. There’s a marvelous moment from Nef that had me choking back tears, Bex desperately trying to keep her composure after a classmate she’s been crushing on makes his move and she willingly gives herself to him body and soul only to have the boy slink out of the room afterward terrified his friends will discover he’s had sex with his school’s lone transgender student. Later on, Young has a pair of stunning scenes where Lily witnesses unspeakable carnage coupled with a selfless sacrifice that allows her to flee to safety only to discover she’s inadvertently found solace in the arms of the person who’s been secretly leading the charge to string up her and her friends for crimes they did not commit.

Moments like these are what give the movie its punch. Levinson allows his heroines to be real people. They make mistakes. They don’t always do the right thing. But they’re honest with one another when it counts, ready to do whatever it takes to ensure they all have at least a fair shot at happiness. So even when things turn into a Russ Meyer Faster, Pussycat! Kill! Kill! fantasyland where scantily clad women strike back at those who have wronged them with a lethal viciousness that seems more than a little fantastical, because Levinson has grounded Lily, Bex, Em and Sarah in an honestly emotional foundation I was much more willing to accept the implausible craziness of the situation far more readily than I’d otherwise would have been able to.

There’s plenty I’ve managed to avoid talking about in regards to the film, stuff like a brief supporting turn from Bill Skarsgård that might be more terrifying than his work as Pennywise in last year’s It or how editor Ron Patane (A Most Violent Year) dynamically cuts the picture with a stylistic precision that’s invigorating. I also couldn’t help but love the way the director stages a signature sequence straight out of the Sergio Leone playbook where all four women clad in stylish red trench coats take up arms and defiantly stand up against the two-faced lynch mob looking murder them. But it’s how all these various pieces fit together that makes Assassination Nation work as well as it does, and while Levinson doesn’t hit every target he aims at, the ones that strike the target end up right at the very center of the sadistically satirical bulls-eye. 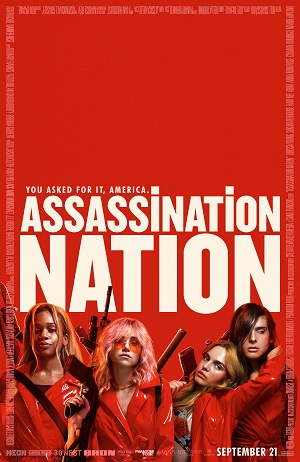