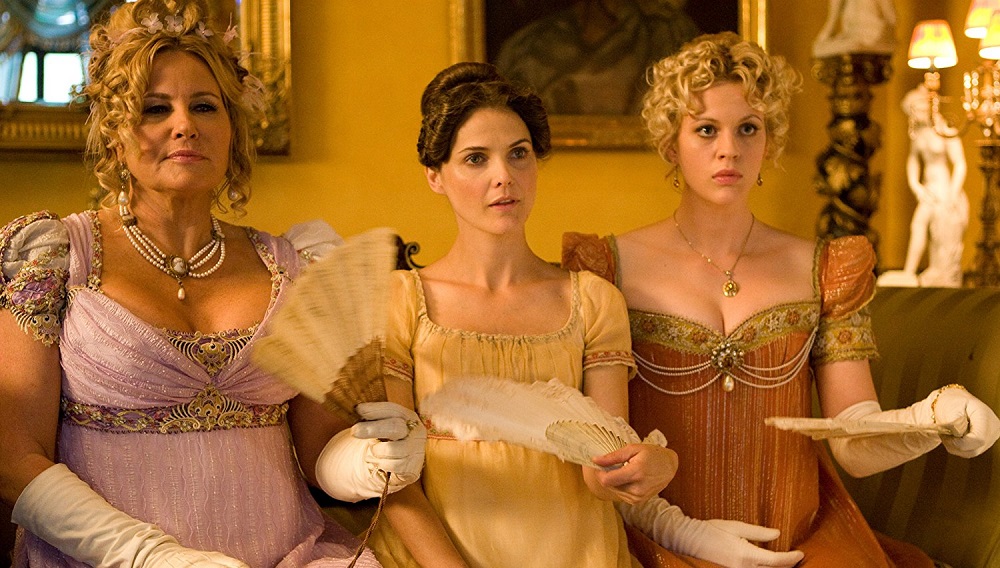 Jane Hayes (Keri Russell) is obsessed with Jane Austen. The thirty-something administrative drone is positive the world we be a better place if things happened more like they did in one of the author’s novels, this by all accounts driven, opinionated, intelligent and still relatively young woman not at all embarrassed about having Mr. Darcy fantasies she’s never outgrown. 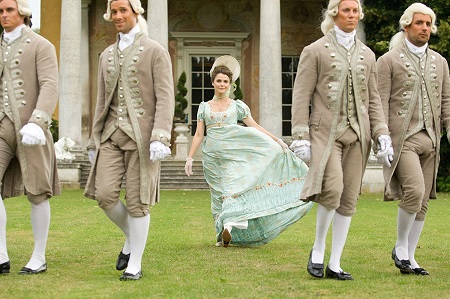 From that starting point blooms Austenland. Based on the book by Shannon Hale, featuring a script co-written by the author and director Jerusha Hess (the Napoleon Dynamite writer making her debut behind the camera), the movie is an odd fantasy creation, a romantic comedy born out of absurdity yet somehow based in an odd, somewhat surreal sensationalistic superficial reality that feels all-too real. It takes current manias with the likes of the Kardashians or any of the “Real Housewives” to an unfathomable location, commenting on celebrity obsession in a way I can’t really say I’ve seen attempted quite like this before.

Sadly, this does not make the movie good, it just makes it unique. Suffice it to say, this adaptation is as big a missed opportunity as anything I’ve seen this year, a handful of wonderful comedic performances undone by an unfocused, overly melodramatic script and muddled, ham-fisted directorial choices keeping things from resonating on any level other than the superficial. It drowns in treacle and pointless sentimentality, leaving a number of its secondary characters hanging in limbo while Jane never comes to life as fully as she deserves to.

Not that the film is a complete waste of time. Whoever had the brilliant idea to cast Jennifer Coolidge and then let her freelance her way through things with enchanting, invigorating inspiration deserves a raise. She’s known as Miss Elizabeth Charming, and she’s come to the Jane Austen wonderland for, well, I can’t really come up with a reason, but that’s perfectly okay. Why? Because she’s awesome, doing and saying things that feel born of the moment and as such she’s a joy, the actress giving the proceedings vital spark of inspiration it otherwise wouldn’t have enjoyed.

If only the rest was worthy of the same sorts of praise. Russell tries her best, and there are certainly moments where she charmed the pants right off of me. However, much of what Jane is forced to do is laughably idiotic. Her dual relationships with a sexy fake stable hand (Bret McKenzie) and a faux Mr. Darcy (JJ Feild), going by the nom de guerre Mr. Henry Nobley, aren’t nearly as enchanting as they should be, everything building in ways that are as facile as they are transparent. The film hangs its lead character out to dry and doesn’t do anything of merit with her, events building to a supposedly heartwarming conclusion that left me cold and disappointed, both emotions sharing the spotlight with equally frustrating relish. 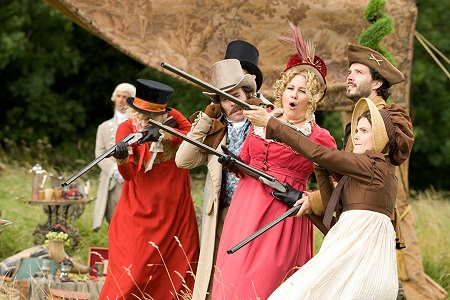 I wish I had better news. Jane Seymour has some nice moments as the woman behind the mirage, her haughty nastiness a delicious counterpoint to the mundane sterility of the prim and proper romantic world she’s constructed. Georgia King also has a few decent scenes as a selfish guest who for her own reasons has it out for Jane, but one gets the idea that Hess and Hale weren’t entirely sure what to do with her and as such don’t utilize the actress or her talents as well as they maybe could have.

Austenland isn’t terrible; I’d be remiss if I claimed otherwise. It just isn’t very good, the whole film a blandly sophomoric enterprise that never comes alive in a satisfying way. The movie is a sitcom masquerading as a feature, and while for some that will be just fine, I’m not one of those who typically finds such pieces of pop entertainment all that worthwhile. I simply don’t see the appeal, this love letter to Jane Austen an envelope better left unopened. 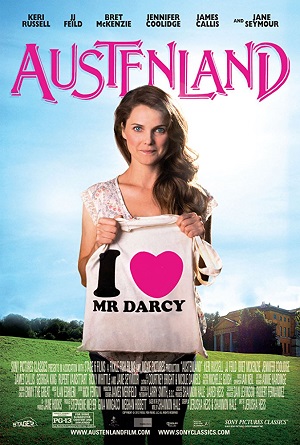