“He knows an old dog when he sees one…”

I remember when writer/director Eric Red’s Bad Moon came out in 1996. It felt like a movie right up my alley, and I wanted to make an effort to see it. But the theatre in Seattle it played at was quite the trek for a young college student on a fixed income, and, well, let’s just say the reviews weren’t exactly kind. Granted, not that I expected them to be, but the universal vitriol that seemed to meet this low budget werewolf thriller was particularly ruthless, and as such I I never put forth the effort to give it a look.

For whatever reason, Bad Moon just dropped off my radar. I never made the time to watch it when it hit VHS, and I honestly cannot recall if the title ever received anything more than a perfunctory DVD release (it came out via Warner Archive in 2014, but if it had been made available before that I haven’t the first clue). It wasn’t until I was speaking with Valley of the Sasquatch director John Portanova about underrated or little-seen werewolf movies that this title even reentered my sphere of interests, and if not for him it’s doubtful I’d have remembered it at all.

That’s not entirely true. The fact Scream! Factory took the time to add it to their vault obviously piqued my interest, especially with the announcement they were bringing the thriller to Blu-ray in both its theatrical incarnation as well as Red’s preferred director’s cut. So it goes without saying with all of those elements working in tandem I’d request a review copy, my own affinity for low budget gore-filled fright flicks no matter what their overall quality obviously helping fuel my desires to give it a once-over as well.

And am I ever glad I did. Bad Moon is much better than the rep unfairly gifted to it back in ’96. More, it offers up some truly excellent creature and makeup effects, a mid-movie kill featuring a con artist getting his gory comeuppance a gory giddy treat. It also moves with refreshing swiftness, Red keeping things at a wondrously exuberant clip, the picture’s niftily plotted 79 minutes flying by in the blink of an eye.

It’s stupid. And silly. And remarkably straightforward. But, in all honesty, that’s also part of the film’s charm. Red, working from the novel by Wayne Smith, brings to life characters and situations that are easy to relate to and understand. Same time, Michael Paré is initially a little too wooden as Ted, an adventurer and nature photographer who comes back from a South American trip with a few new scars and a serious affinity for walking into the woods late and night to howl at the moon. Yet his physicality is an asset, and the makeup effects transforming him into his hairy alter ego are outstanding. More importantly, he comes alive during the climactic sequence, reminding me how good an actor he can be when he puts forth the effort, and as such making me wonder how much better the movie could have been had he maintained this level of excellence throughout.

Mariel Hemingway is great as Ted’s worried sister Janet, and I really liked her emotional journey as she put the pieces together and comes to understand the affliction torturing her brother. Child actor Mason Gamble is solid as her son Brett, the look on his face when he realizes werewolves are real priceless in its genuine terror and intensity. Best of all is Primo, a talented German Sheppard tasked with portraying Janet and Brett’s protective pooch Thor, the dog really being put through the ringer as he solves the central mystery and uncovers the truth about Ted. He’s the movie’s star, if I’m being honest, the climactic fight between the canine and the werewolf frankly amazing.

So there you have it. Bad Moon worked for me, and I can’t quite grasp why it didn’t get better word of mouth or more support from the studio back during its initial theatrical release. While far from perfect, Red’s film is a solid little shocker with some seriously excellent makeup effects, and here’s hoping that with Scream! Factory’s excellent Blu-ray fans of this sort of genre fodder take the time to give it a look at their earliest convenience.

Director’s Cut (1:19:25) – One scene is different, and it’s an important one, and in all honesty makes watching this version of the film over the theatrical cut a no-brainer.

Audio Commentary with writer/director Eric Red – Chockfull of information, this track is really something of a tough slog at times, Red delivering a somewhat professorial commentary that isn’t particularly easy to listen to. That said, he’s not above criticizing himself, the studio and even his actors, his recounting of shooting the climactic transformation sequence with Hemingway amazingly, and brutally to the point of being borderline cruel, honest.

Nature of the Beat – The Making of “Bad Moon” (35:17) – Excellent retrospective doc that lives up to the Scream! Factory standard, filled with cast and crew remembrances that fans will likely find fascinating.

Unrated Opening Sequence (6:07) – Unrated version of the Borneo prologue pulled from an old VHS tape. Not that different than what appeared in the finished film; interesting nonetheless.

Bad Moon deserved better then the fate it met with back during its original 1996 release. Here’s hoping now with Scream! Factory’s magnificent Blu-ray release Eric Red’s lively little supernatural shocker gets the reevaluation it deserves because, most assuredly, this werewolf tale is a keeper, and is also a movie I’m certain I’ll revisit multiple times in the very near future. 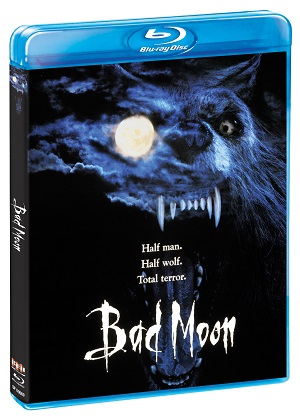