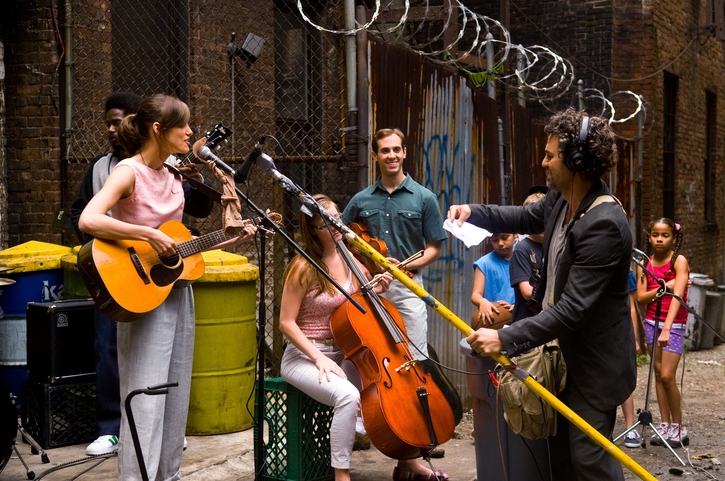 Dan (Mark Ruffalo) is a New York record executive whose unwillingness to change with the times has potentially cost him his job. Gretta (Keira Knightley) is a British songwriter whose longtime boyfriend Dave (Adam Levine) just hit it big and in the process of achieving stardom has suddenly embraced much of the excess that goes right along with it leaving her suddenly single and in the proverbial lurch.

On a night when all he wants to do is get drunk and all she’s hoping for is a peaceful few hours before boarding the plane back to London, the two find themselves in the same club at the same time, one making the other’s acquaintance while their lives are at a mutual crossroads. Dan knows greatness when he hears it, and Gretta has it in spades even if she’s not quite confident enough to know it. Taking a leap of faith, the two join forces to compose an album on the streets of New York, the sounds of the city itself an energizing catalyst that will hopefully bring the young woman success and the one-time hit-maker a music industry sensation one more time.

John Carney’s Begin Again is noticeably safer than his Oscar-winning debut Once. It’s more predictable. More melodramatic. More willing to play in the relatively safe waters of convention. At the same time, that doesn’t make it any less joyous, Begin Again having an innate hardscrabble authenticity to its layers making even the more tiredly cliché aspects feel more alive and genuine than they otherwise have any right to be. It is a film that made me smile, pretty much start to finish, leaving me to exit the theater with a song in my heart and a skip to my step I didn’t recall having before I entered.

The initial setup admittedly takes far too long. We watch Dan’s fall from grace leading to his arrival in the bar to see Gretta take the stage only to suddenly rewind backwards after the two meet to see her story and how her relationship with Dave devolved to the point where the young musician plans to retreat back to England. While important information, all of this takes forever, meaning the meat of the actual movie doesn’t even kick into gear until we’re almost 30 minutes in. That’s almost a third of the 104-minute running time, and I was definitely squirming in my seat a bit waiting for the important stuff to get going.

When it does, however, Carney’s latest doesn’t just take off it soars into the stratosphere. Knightley and Ruffalo make a winning team, each playing off the other with multifaceted specificity achieving a beauteous eloquence that’s hypnotizing. Their characters are fully formed, completely three-dimensional, each finding little facets and quirks making them distinct and unique in ways that are consistently enthralling. Knightley, in particular, is sublime, delivering one of her flirtiest, most easy-going performances in ages, her Gretta maybe the most likable the actress has been since stealing scenes and hearts in Bend It Like Beckhamway back in 2002.

The film works best in its quieter moments. There are sparkling little bon mots sprinkled throughout making the story’s inhabitants feel more genuine than they otherwise would have.  Little things, like the way Ruffalo and Catherine Keener (playing Dan’s rock journalist ex-wife) fall into intimately familiar patterns every time he shows up on the doorstep to discuss their teenage daughter Violet (a magnetic Hailee Steinfeld), give the movie a perceptive pizazz I responded to whole-heartedly, allowing for the more obnoxiously manufactured elements to feel less so as far as the overall mélange was ultimately concerned.

The music, while not as sensational as the songs Glen Hansard and Markéta Irglová composed for Once, is still outstanding, the opening piece sung by Knightley and a climactic number delivered with soulful flair by Levine each deserving of becoming an outright hit (or, at the very least, an Academy Award nominee). Better, each is organically interwoven into the story, every tune sung part of the fiber that gives the overall drama its vivacious kick.

Begin Again is far from perfect. It lacks the delicate sensibilities of Carney’s 2007 effort, some of the coincidental melodramatics a bit too easy, a bit too obvious for my taste. But the characters themselves are beautifully constructed, the way the two leads interact with one another as well as the world at large continually captivating. More than that, though, while happy endings are found everything doesn’t get tied up in a fancy bow, threads still left dangling in a way that hints at the hope, happenstance and healing with any luck still to come. 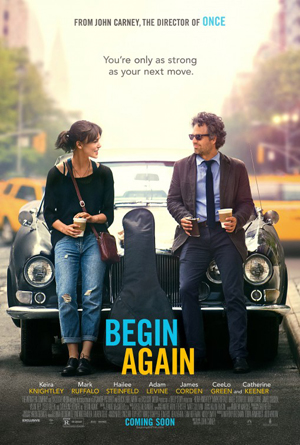