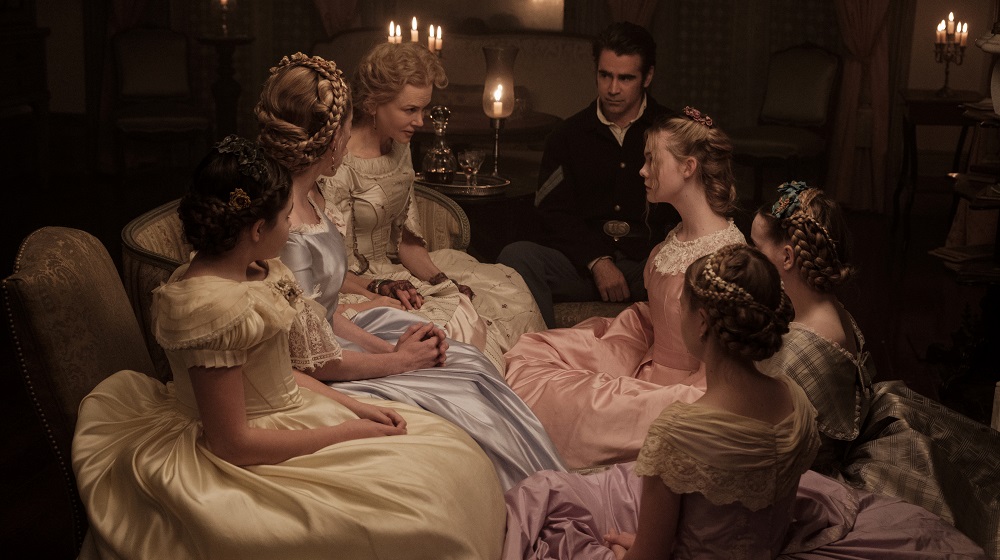 Inquisitive, mushroom-hunting youngster Amy (Oona Laurence) has found a wounded Union soldier hiding in the woods just outside the gates of her Virginia school for girls run by the commanding Miss Martha (Nicole Kidman). After learning his name is Corporal McBurney (Colin Farrell) and introducing herself in the manner a proper Southern lady should, she helps get the quickly deteriorating enemy combatant back to her school before he succumbs to his injuries. 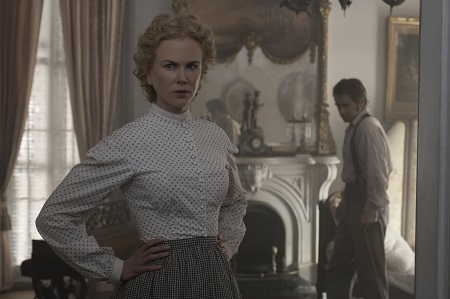 Although leery of having a Union soldier in their midst, Miss Martha and her trusted assistant teacher Miss Edwina (Kirsten Dunst) feel it is their Christian duty to nurse Corporal McBurney back to health before turning him over to the Confederate Army. But, in doing so, they have opened a door to the outside world that affects each woman and girl, no matter what their age, who live on the school’s grounds. Amy makes friends. Sexually blossoming Alicia (Elle Fanning) hopes to explore forbidden delights. Headstrong Jane (Angourie Rice) finds her distaste of all things Union starting to fade. As for the rest of this trio’s classmates, the perpetually curious Marie (Addison Riecke) and the eerily quiet Emily (Emma Howard), they’re also starting to succumb to Corporal McBurney’s charms, the wounded soldier quickly determining he’s got a good thing going for himself at this school and as such he’s determined to make the most of this unique situation.

Based on the novel by Thomas Cullinan and a remake of the Don Siegel directed, Clint Eastwood and Geraldine Page starring 1971 favorite, Sofia Coppola’s (Somewhere, Lost in Translation) take on The Beguiled is a decidedly feminist, unnervingly funny foray into Southern Gothic terrors that’s as exquisitely made as it is oddly problematic. It’s a movie I really, really liked, maybe even loved, exiting the theatre, but also one’s whose interior elements began to gnaw at me more and more as I pondered all the different places the hugely talented filmmaker chose to take her version of the story. Featuring mesmerizing performances from Farrell, Kidman, Laurence, Rice and especially Coppola’s go-to gal Dunst, hypnotically shot by ace cinematographer Philippe Le Sourd (The Grandmaster), the film nonetheless has me sitting in a weird grey area I’m not altogether comfortable with or even used to, and as such urging people to see it is an iffier proposition than I originally thought it was going to be.

The central conflict remains the same here as it did in Cullinan’s book and in Siegel’s adaptation: the sexually heightened battle of wills between Corporal McBurney and Miss Martha. She falls for the dashing Union soldier same as everyone else, yet she also just as clearly sees what it is he’s trying to do, especially as it pertains to the beautifully wilting flower that is Miss Edwina. McBurney comprehends the ground he stands on is it pertains to the school’s headmistress is under constant threat of melting underneath his feet. As such, he does everything he can to ingratiate himself with every adult, teenager and child at the school, hoping to make himself so indispensable that sending him away to a Confederate prison will be the last thing on anyone’s mind.

A lot of this stuff is terrific. The scenes between Farrell and Kidman are overflowing in amorous intensity, their back and forth conversations as they spin verbal webs around everything they want to say, almost as if they’re speaking in sexually ambiguous code, are as informative as they are sodden in humorous venom. Anytime Laurence and Farrell are on the screen together the film comes alive in childlike wonder, Amy’s continually inquisitive ability to see right to the heart of any matter giddily priceless until the point it suddenly becomes uncomfortably paralyzing. There’s also something just plain priceless about Rice’s transformation, her haughty rigidity slowly but surely disappearing as she begins to understand men, whether they be Union or Confederate, are often cut from the same ill-fitting, if oftentimes still enticing, cloth.

But it is the evolving dynamic that exists between the Corporal and the main object of his manipulations, the emotionally crippled Miss Edwina, that I found most fascinating, and that is almost entirely due to the breadth and depth of Dunst’s gripping performance. The pain she feels having been left to wither and potentially shrivel up and die as a spinster teaching a girl’s school is palpable from the second she walks onscreen, her mousy timidity starting to wither away bit by bit as the soldier attempts his complex emotional seduction. Dunst explodes with passionate vivacity as things move inevitably towards their ruinously horrific conclusion, the lengths she’ll go to achieve her independence tragically giving way to the practical realities of warfare and the feminine independence those around her are suddenly emboldened to achieve.

Yet, as laudable as much of these depictions are, while this female-centered spin on the material is both warranted as well as long overdue, there is a surface-level emotionalism to the story that, the longer I think about it, the more it annoys me. Unlike Siegel’s brutally uncompromising film, Coppola doesn’t appear to want to dig nearly as deeply inside any of her characters save for Miss Edwina. As such, the delights come from watching each actor work together in symphonic union and not due to the complexity of the characterizations themselves, making the emotional footprint of the aggressively cynical climax so light it’s practically nonexistent. 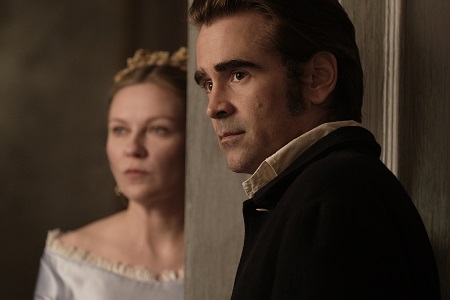 Then there is the absence of Hallie. Magnificently portrayed by Mae Mercer in Siegel’s version, she is the school’s lone slave and the only one who maintains her sense of self. She doesn’t lose her sanity once the Union soldier begins his seductions and when the rest of the women at the school plot how they are going to deal with him once he starts to threaten their collective safety. More, she is the window to all that is transpiring, the one clean soul who takes no side in the fight and as such becomes a clear, unambiguous symbol of what it was that was at stake during the Civil War. The fact Coppola’s adaptation avoids this discussion altogether simply does not make sense, and for the life of me her whitewashing of the story in this manner is more than worthy of far lengthier discussion than what is allowed for in a simple review.

Even so, this take on Cullinan’s source material drips in atmosphere, the sweltering Louisiana humidity squeezing the viewer in its sweaty embrace. There is also something remarkable in just how categorically Coppola makes her feminist statements, the bleakly comedic way in which she slowly allows her powerful southern beauties to take control and reconstitute Corporal McBurney into the form they desire, until they crave him no more, dazzling in its gleeful cruelty. I just wish the director had dug a little deeper, that she had not shied away from a number of additional issues outside of the ones relating to sex and gender that she so happily subverts. The Beguiled is well worth seeing but it’s also just as worthy of being taken to task for its shortcomings, Coppola’s film a mystifying stunner I don’t think I’ll have a final opinion on until the opportunity arises to watch it again. 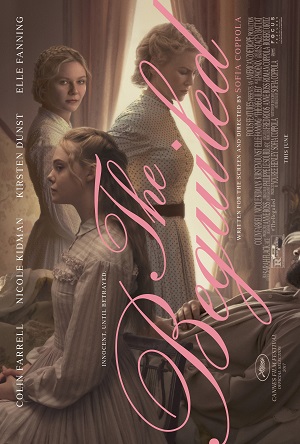