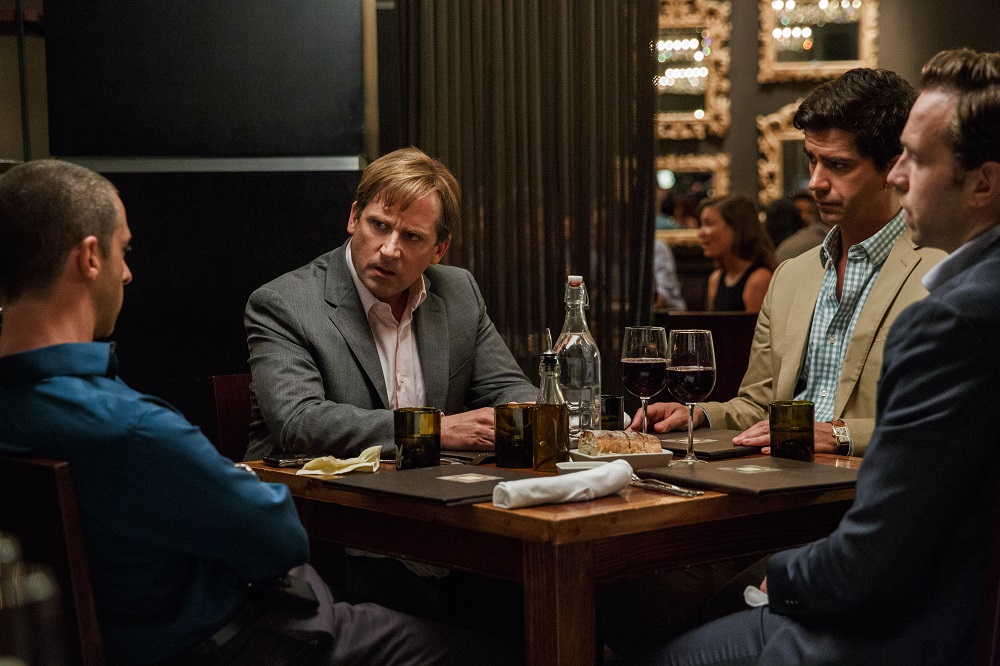 In 2005, oddball San Jose money manager Dr. Michael Bury (Christian Bale) discovers an anomaly in the housing market, quickly coming to the realization that the big banks have built themselves a house of cards that’s going to tumble down into pieces sooner rather than later. Much to the shock of his investors, he decides to bet the entire value of the hedge fund he runs against what at the moment is a booming market, “shorting” housing, as it were, doing something now financial analyst anywhere at any point in history would never recommend doing. 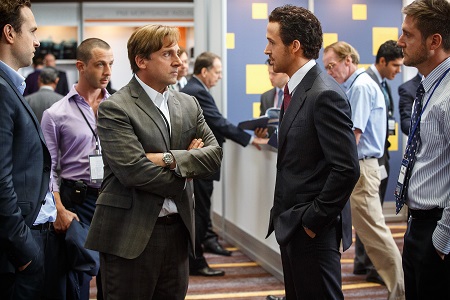 Over in New York City, Wall Street banker Jared Vennett (Ryan Gosling) discovers Bury’s plan, quickly realizing he’s only scratching the surface of what’s going on with the economy as well as just how much money could be made from knowing this information first. He in turn approaches angry hedge-fund manager Mark Baum (Steve Carell) and his crack team of analysts (Jeremy Strong, Hamish Linklater, Rafe Spall) to finance his play on the housing market, the group initially skeptical of what it is he’s telling them. But once they do their own inquiries, they learn things are far worse than anyone has imagined, the bubble that’s about to burst one that won’t just effect housing, but will likely tank the entire U.S. economy right along with it.

Based on the novel by Michael Lewis, the guy who found a way to make baseball, math and statistics fascinating with Moneyball, the satirical chronicling of the 2008 housing market collapse The Big Short isn’t exactly an inspirational riot, even if there are ample laughs to be found littered throughout the film. Director and co-writer Adam McKay (The Other Guys), working with screenwriter Charles Randolph (Love & Other Drugs), has crafted a star-studded, character-driven think piece that’s as funny as it is edifying. The film breaks down all that happened and took place but does so in ways that are easy to understand and simple to digest, bringing together a ragtag group of eccentrics who end up making off like bandits, even if they don’t exactly feel too good about doing so afterwards.

There are essentially three plots running on parallel courses here, the two fleshed out in that synopsis as well as a third revolving around two small town analysts (Finn Wittrock, John Magaro) and a banker-turned-paranoid-environmentalist (Brad Pitt) who make the biggest play against the housing market out of all of them. Each dissects the coming crisis with procedural-like exactitude, the trio of stories revealing different pieces of an interconnected puzzle one would guess the big banks, and likely the government agencies that were supposed to be keeping an eye on them, would rather not have the average layperson put together.

What’s most interesting is how McKay and Randolph tackle the most complicated aspects of the collapse, revealing how things work and what terms like CDO and mortgage-backed securities mean using a theatrical device Woody Allen would be proud of. Taking a cue from Annie Hall, the filmmakers enlist the help of celebrities like Margot Robbie, Selena Gomez, Anthony Bourdain and renowned behavioral economist Dr. Richard Thaler to shatter the fourth wall and talk to the audience directly, breaking things down in ways that are both funny as well as refreshingly insightful. It’s a great conceit, one the director pulls off brilliantly, and each time it happened I inched forward in my seat eager to learn more in regards to what these out-of-nowhere, seemingly random guests were about to tell me. 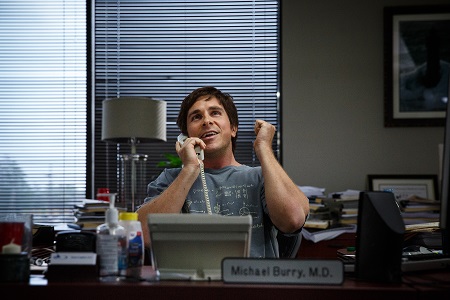 As for the rest of the movie, it’s pretty terrific, due in large part to McKay and Randolph’s dynamically intricate script. Same time, the director doesn’t always appear to have the best handle on things, some scenes going on much longer than necessary while others cut themselves off too quickly. There’s also some visual inorganic lumpiness that calls too much attention to the camerawork while not paying enough of it to the story being told within the confines of herky-jerky visuals. That third scenario, the one with Pitt, Wittrock and Magaro, also doesn’t play as well as the other two, and while it’s never bad, per se, it just doesn’t feel as refined, nor anywhere near as complete, as the other two major subplots do.

Even so, the acting is universally excellent, especially on the parts of Bale and Carell, the two of them commanding the screen every time they walk into the frame. This is also a major step up in vision and in quality for McKay, the longtime Will Ferrell compatriot branching out in a way that gets me understandably excited to see what he’s going to be up to next. While The Big Short is hardly uplifting, it still manages to tell a rambunctiously funny tale that’s as informative as it is entertaining, humor walking hand-in-hand with tragedy to ultimately craft a comedy that’s impossible to dismiss. 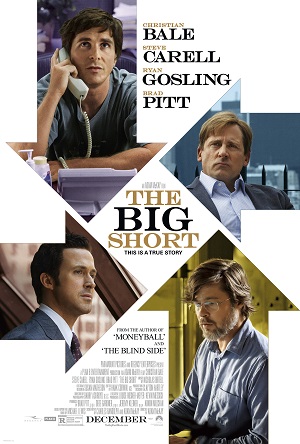