Feeney (James Frecheville) has come home to Ireland. It is 1847, the height of what will become known as “The Great Famine,” and the seasoned Irish Ranger has left the British Army, tired of fighting abroad for a government that is currently treating his own countrymen like servants and slaves, not human beings. Hoping to make amends with his mother and brother, he returns to find them dead, the former from the bitter winter cold coupled with the famine, the other hanged by the local magistrates for a relatively minor offense. After a third act of cruelty results in the death of another loved one, Feeney has had enough, exacting brutal, bloody revenge against all of those he holds responsible as well as those who assist them, his ultimate goal to bring to justice the indignant landowner, Lord Kilmichael (Jim Broadbent), who callously rules this portion of Ireland.

When word of the Ranger’s killing spree reaches the British military, not wanting word to leak out that a man they so expertly trained has turned against them the decision is made to send a small party to track Feeney down and, if capture proves to be too difficult, to execute him on the spot. The mission is led by Captain Pope (Freddie Fox), and he in turn enlists Hannah (Hugo Weaving), a former soldier and an expert tracker with a troubled past. More importantly, he’s Feeney’s former commanding officer, the thought being their prior relationship might give him additional insights into the Irishman’s plans. They’re accompanied by two others, the young idealist Hobson (Barry Keoghan), whom Pope wants as his aid, and the grizzled Irish writer Conneely (Stephen Rea), who agrees to go along as interpreter and guide as long as he is well paid and can document the manhunt for posterity.

The rugged, bleakly violent Black ’47 is an Irish revenge western set against a historical backdrop. Director Lance Daly (The Good Doctor), working with a collection of writers including P.J. Dillon (Rewind), Eugene O’Brien (Eden) and Pierce Ryan (Standby), hasn’t reinvented the wheel, relying upon classics like The Searchers and Unforgiven as his template for how this story is going to play itself out. Feeney is angry. He feels betrayed. He’s a stranger in his own homeland, his agreeing to serve with the British as a soldier estranging his from those who used to call him friend and compatriot. As such, he feels as if he has only one outlet left to him and that is to seek justice utilizing the very skills taught to him by the very people he is now standing up against. It’s a fairly traditional scenario, Feeney a 19th century Irish cross between John Rambo, Josey Wales and Paul Kersey, utilizing any and all means at his disposal to deliver his vengeance upon those he deems guilty of various wrongdoings.

That it all works as well as it does is as much a testament to the crackerjack cast as it is to Daly’s brooding, violently controlled direction. This desolate Irish landscape is magnificently brought to life, layers of frozen dirt and rotting bits of grime and feces frequently filling the screen. No one is clean inside this story, both figuratively and literally, and that tattered environment springs forth off of the screen with unsettling realism. Daly just presents this backdrop for what it is and nothing more, and while Declan Quinn’s (Ricki and the Flash) vibrant and alive cinematography refuses to wallow in the muck, it’s unsightly sheen still saturates all aspects of the production nonetheless.

As for the cast, the collective excellence of all involved is immediately apparent. While Frecheville, Weaving and Fox are the three actors we spend the most time with, the remainder of the supporting cast still make an indelible imprint. No matter how big or small their part, each gives themselves over to the material, allowing for a historical authenticity to set in that I found wonderful. An almost unrecognizable Rea is particularly outstanding, his performance a slippery observational balancing act that held me spellbound. He shares a quiet scene with Broadbent near the end that is one of the single most outstanding moments I’ve seen in any one motion picture in all of 2018, the way he twists his phrases this way and that as Conneely outlines his observant points to an enthralled Lord Kilmichael just about perfect.

But the core relationship at the heart of this affair remains the one that exists between Feeney and Hannah. Even though they share precious few scenes together, Frecheville and Weaving still exude a grizzled, well-worn intimacy that speaks to the shared history of their two characters that was forged in the crucible of the battlefield. The pair have a withered chemistry that’s genuinely affecting, making the fact they’re suddenly on opposite sides of the metaphorical fence all the more captivating. Weaving, in particular, is masterful as Hannah, the evocatively focused emptiness of his stare sending an almost constant shiver up my spine whenever his character entered the frame.

The film, while never losing focus on the massive inhuman travesty afflicting Ireland during this time period, doesn’t exactly make use of it in ways that expand the story beyond the obvious. While the famine is at the heart of the tale, once Hannah begins hunting Feeney things become more focused on both the chase itself as well as the former Ranger’s determined quest for revenge than it does on anything else. This historical event becomes more of a background element, and other than being an aspect of a couple of unexpected subplots involving Hobson and also Lord Kilmichael, once things progress beyond the halfway point it’s just part of the overall milieu and little else. Because of this, I do wonder if Daly originally intended this to be a slightly longer motion picture. There are a couple of instances that feel oddly undernourished, as if various story beats had been edited resulting in a disheveled choppiness that’s mildly disconcerting.

But only mildly. Overall, Black ’47 is a strong, blood-soaked thriller that builds to a crackerjack climax overrunning in violence and mayhem. Feeney proves to be a resourceful antihero who is easy to root for, while Hannah’s disquieting quest to capture him is haunting in its complicated moral ambiguity. Daly has made a very good picture, this moderately under the radar revenge-thriller one I hope interested viewers make the effort to seek out and watch. 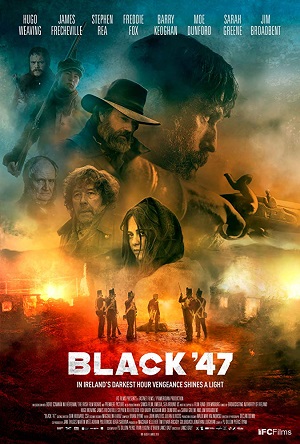