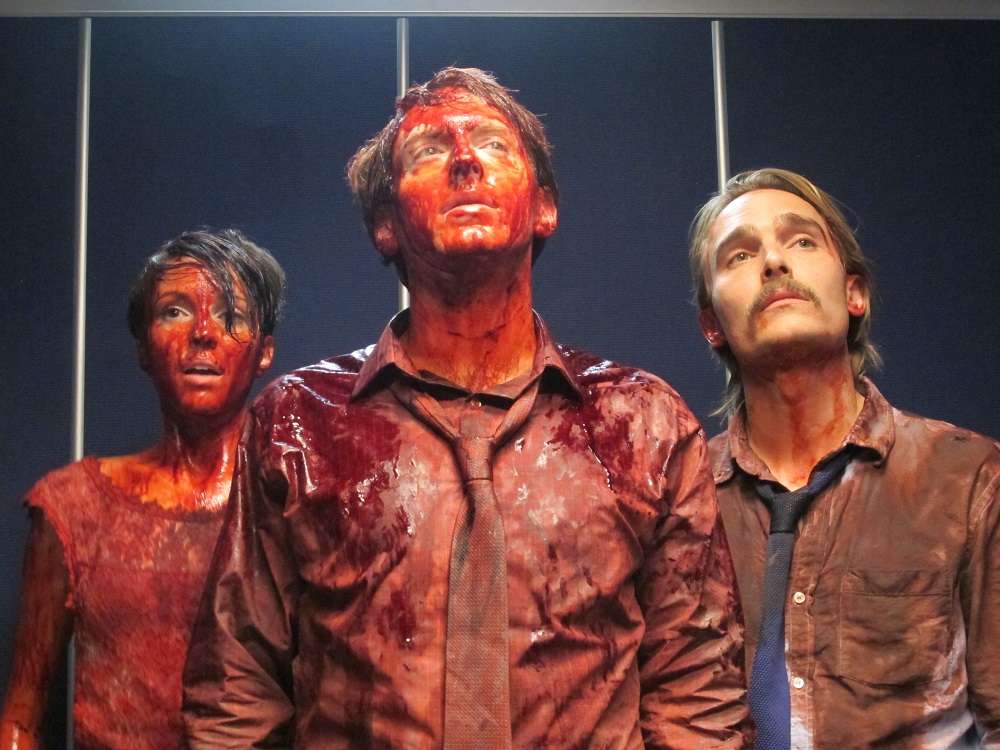 Evan (Fran Kranz) is a hardworking corporate drone bucking for a promotion. His day starts on a sour note when he discovers his best friend and eternal slacker Tim (Joey Kern) hasn’t done a thing to prepare for a big meeting with a potential new client. It doesn’t get any better when girlfriend, and head of HR, Amanda (Emma Fitzpatrick) appears to want nothing to do with him after a colossal romantic faux pas the night before. But things go off the cliff entirely when former college adversary Max (Pedro Pascal) appears out of nowhere and scoops Evan’s promotion right out from underneath him, almost as if some evil supernatural force was helping Max do it.

Evan’s not entirely wrong. Turns out, Max’s plans for corporate restructuring requires lots of late nights and plenty of sunblock, the new employee separating the staff into two different categories, one of which happens to reside squarely on the dinner menu. With head of security Frank (Marshall Givens) lending a helping hand, it’s up to Evan, Tim and Amanda to put a stake through the heart of the company vice president’s machinations, even if doing so means laying waste to the entire office and everyone who’s already joined Max’s undead team.

Bloodsucking Bastards is basically the odd, overlong, fitfully funny love child of Office Space and Fright Night. The story of a corporate office taken over by vampires looking to streamline the workforce and maximize profits while also stockpiling a cubicle full of human-sized foodstuffs, director Brian James O’Connell’s silly little undead B-grade supernatural frolic is happily a great deal of fun. While the observations found within Ryan Mitts and Dr. God’s (the semi-clever pseudonym for a Los Angeles comedy troupe, of which O’Connell is a member) screenplay aren’t entirely original, they are amusing, the deadpan, sarcastically mocking tone far more ghoulishly pleasant than I anticipated it would be before watching.

It helps that the film is perfectly cast. Joss Whedon stalwart Kranz – the scene-stealing veteran of both The Cabin in the Woods and “Dollhouse” – is terrific as the browbeaten yet unbowed lead, his eventual awakening to the vampiric menace wandering the halls of his office building delightful. Kern and Fitzpatrick are also winning, while the underutilized Givens steals scenes left and right as the security guard who’s far more prepared for a supernatural assault than by all practical considerations he should be. As for Pascal, he oozes smarmy menace as the supercilious cad looking to take over, his verbal jousts with Kranz having a nice little kick I giddily responded to. 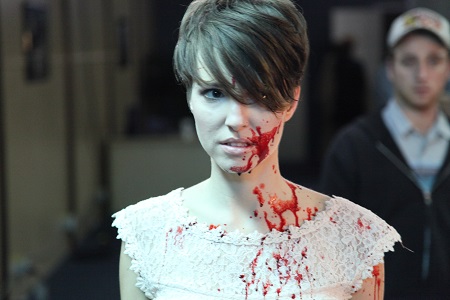 Same time, the movie is exceedingly slight, and even at a brisk 86 minutes O’Connell has trouble maintaining narrative momentum. Things get a bit padded towards the end, almost as if the writers ran out of ideas and didn’t quite know where they wanted to take things, deciding on a rather rudimentary and forgettable finale that’s nowhere near as satisfying as all that came before it.

Still, Bloodsucking Bastards isn’t without charm, and O’Connell shows enough directorial acumen to pique my curiosity as to what he and the rest of the Dr. God team have up their collective sleeves next. As vampire workplace comedies go, this might not go for the jugular, but that doesn’t mean it still can’t cut into the vein and draw enough blood to satisfy, the juxtaposition of laughs to scares just good enough to warrant a potential second look. 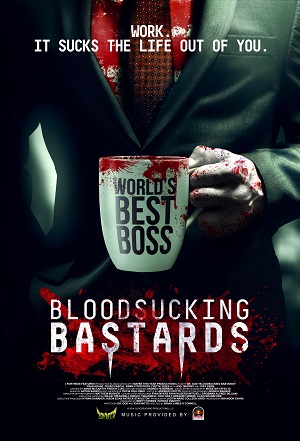