Imagination and Ingenuity Can’t Stop Baby from Being Awful

Unknown to all humanity, babies aren’t always what they appear to be. Some of them, like seven-year-old Tim’s (voiced by Miles Bakshi) brand new baby brother (Alec Baldwin), are actually employees of Baby Corp, working hard to make sure infants remain beloved and adored the world over no matter what cute obstacle may arise. Normally sticking to their heavenly corporate offices high up in the clouds, this Boss Baby has been sent to Earth to investigate the goings on at Puppy Co., the threat their furry four-legged product presents not to be underestimated.

The Boss Baby, loosely based on the best-selling picture book by Marla Frazee, boasts an admittedly wacky premise, the whole conceit a Tex Avery meets Chuck Jones flight of fancy that’s as silly as it is nonsensical. Directed by DreamWorks veteran Tom McGrath (Madagascar, Megamind) and with a script by Michael McCullers (Austin Powers: The Spy Who Shagged Me), there’s a little more crazed ingenuity here than I anticipated, some of the concepts and ideas, while still insane, sparkling with an upside down whimsical ingenuity that’s unexpected. The whole thing is a giddy, energetic throwback to cartoon showcases of the 1940s and ‘50s, all of it presented with an enthusiastic glee bordering on impressive.

Even so, this movie was not made for me. In fact, I’m fairly certain I hated it. Other than an inspired early sequence where Tim and his new sibling are waging kid-powered war, the latter figure assisted by a number of additional fellow Baby Corp employees also clandestinely hiding amongst the clueless suburban parental units, there wasn’t a lot that captured my attention. While the visual style of the film was impressively crafted, the majority of the jokes just kept falling continually flat. Worse, some of them were just plain out of touch with reality, the fact the filmmakers still think it’s humorous to make fun of little boys for having gender neutral, feminine-sounding names just plain idiotic. I couldn’t stand this stuff, and the more McGrath and McCullers crammed tone-deaf jokes and gags like this into their story the angrier I got, my growing fury making it increasingly difficult to enjoy the creative sequences they did manage to come up with, the rancid taste of the abhorrent bits overpowering all they touched.

Baldwin is funny, and while not exactly a surprising choice to play this character he still does what he can to enliven and elevate the material wherever he can. But much of the remaining members of the supporting cast, most notably Steve Buscemi as the conniving Puppy Co. CEO and Jimmy Kimmel and Lisa Kudrow as Tim’s oblivious parents, are given precious little to work with and have a heck of a time trying to make gold out of any of it, a lot of their verbal jokes and jabs falling hopelessly flat. As for Tobey Maguire, if this were Stand by Me or some similar sort of coming of age remembrance piece his voiceover narration would be more than adequate. As this isn’t that type of movie, as good a job as he does it still feels anachronistically out of place, and while I get the idea of what McGrath and McCullers were going for frankly I just don’t feel like it works.

It’s somewhat weird. The Boss Baby is hardly terrible. It has moments of wit and ingenuity that are undeniably impressive, and with Baldwin reveling in playing a character so obviously in his wheelhouse I can’t say the picture is entirely devoid of laughs. That being so, I still did not enjoy watching this motion picture and, more to the point, I can’t imagine many others doing enthusiastic backflips over it. It just isn’t all that good, and honestly I don’t have anything additional I feel like adding. 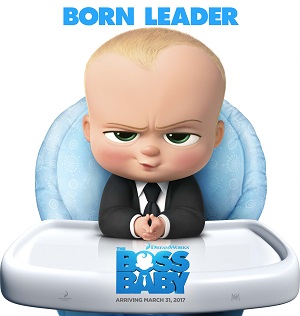